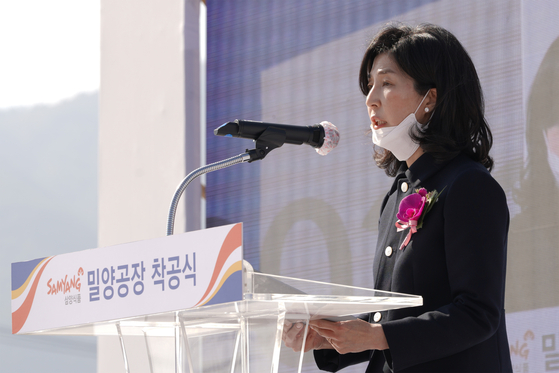 Samyang Foods President Kim Jung-soo speaks during a speech held in Miryang, South Gyeongsang, to celebrate the breaking of ground on a new factory. [SAMYANG FOODS]

The construction of the factory, designed to manufacture instant noodles for export, is scheduled to complete by 2022.

“A lot of companies are building production facilities overseas to cut costs, but we decided to build a factory in Miryang for the economic activation of Korea,” said Samyang Foods President Kim Jung-soo during a speech in Miryang on Monday. Kim vowed to improve the reputation of Korean food globally.

The company decided to build a new factory in December due to strong demand overseas, according to Samyang Foods.

Posco is building the factory.