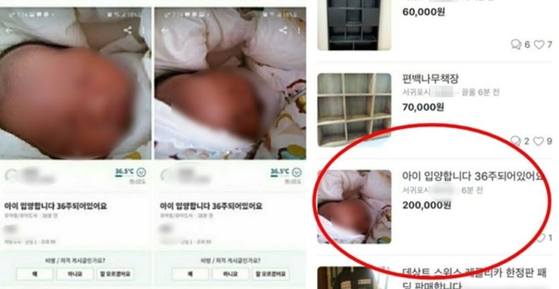 A screenshot of a controversial listing posted by a woman in Jeju offering to put her child up for adoption in exchange for 200,000 won on the e-commerce application Danggeun Market on Friday. [SCREEN CAPTURE]


Calls for an overhaul of Korea’s adoption system are mounting after a woman in Jeju was caught offering to sell her newborn child through an e-commerce application for 200,000 won ($175).

According to the Jeju Seogwipo Police Precinct, the 27-year-old woman posted the offer on Danggeun Market last Friday after panicking over the birth of the baby.

The post contained two photographs of the newborn, along with a message from the mother saying the baby was 36 weeks old and that she would give it up for adoption in exchange for 200,000 won.

Police said that the baby was actually only three days old when the woman put up the listing from a postnatal care center after giving birth at a nearby ob-gyn clinic in Jeju.

She was picked up by police and questioned about potential violations of the Child Welfare Act. The woman said she put up the post after feeling frustrated by how complex and long adoption processes are following consultations with a state agency, police said.

“[The woman] has since expressed remorse for her actions, and we cannot determine [criminality] based on preliminary testimony as the childbirth she experienced was unconventional and because she is in a difficult economic situation,” said a police spokesperson.

Police added the woman was jobless and was not in a position to receive financial help from her parents, who also reside in Jeju. The baby’s father, who the woman said in a separate posting was not around, was also not in a situation to help, police said.

The shocking story is shedding new light on women struggling with unexpected pregnancies, and the inadequacies of the country’s adoption system.

According to police statistics released by ruling Democratic Party Rep. Back Hye-ryun, a total of 1,272 newborns were abandoned from 2010 to 2019, averaging around 127 cases per year. In the same period, there have been 110 cases of infanticide.

The Ministry of Health and Welfare lists premarital births as a leading cause of newborn abandonment, as well as extramarital births and family breakdowns.

“It is a frightening reality that in an age where we are experiencing the lowest total fertility rate on record — a rate of 0.92 births [per mother] in 2019 — crimes like child abandonment and infanticide continue,” Rep. Back said, adding she was preparing to submit a bill to toughen punishment for such crimes.

Other experts cite the need to revamp the adoption system altogether to make it easier for mothers who give birth in difficult circumstances to offer children for adoption.

Under the current system, any mother who gives up her child for adoption must first register the birth, then care for the child for at least seven days before the newborn is taken into state custody. This is to provide the parent ample time to consider their decision.

In a Facebook post on Sunday, Jeju Governor Won Hee-ryong pledged to extend financial and social aid to single mothers who are struggling with the financial burdens of child care.

“Giving birth to a child as a mother of a living being is something to be praised and encouraged,” Won wrote. “If she cannot take care of her child alone, then our society, through systems like adoption — should help raise the child.”

Welfare splurge not the answer