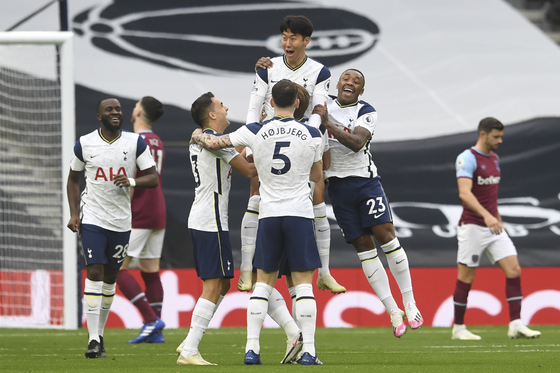 Son Heung-min of Tottenham Hotspur, center, celebrates after scoring a goal during a Premier League match against West Ham United at Tottenham Hotspur Stadium in London, England, on Sunday. [AP/YONHAP]

During Spurs’ Premier League match against West Ham, Son scored the opener less than a minute into the match, assisted by Harry Kane. Then in the eighth minute, Spurs extended their lead but this time thanks to Kane with assistance from Son.

Kane continued Spurs’ streak by scoring the club’s third goal of the match in the 16th minute to extend the lead to 3-0. Finishing the first half with such a dominant lead, it seemed as if Spurs were going to take another victory at home.

But that wasn’t to be.

With less than 15 minutes remaining in the match, West Ham started to fight back. In the 82nd minute, Fabián Balbuena finally scored West Ham’s first goal of the match which was followed by an own goal from Davinson Sánchez to bring the score to 3-2 to Spurs.

“Sometimes football is difficult to explain,” Spurs head coach Jose Mourinho was quoted as saying on Spurs' website. “This is the Premier League, this is the power of every team, the belief every team has, and we lost two incredible points.”

Despite another strong performance by Son and Kane, Spurs had to settle with the 3-3 draw. With the result, Spurs retained their spot at sixth with two wins, two draws and a loss for the season, totaling eight points, while West Ham is ranked eighth with two wins, a draw and two losses, totaling seven points.

“The lads are devastated for the result,” Son said to Sky Sports. “We think we deserved three points and played really well until the last 10 minutes. It’s a shock.”

For Son, this was his seventh Premier League goal of the season, which is good enough for him to tie for top scorer with Everton’s Dominic Calvert-Lewin.

Kane extended his lead in the Premier League’s assist standing to seven, while his two goals tie him for fourth place in the league standing in goals, with a total of four.

Along with Son, Spurs’ head coach Mourinho expressed his disappointment in the team’s result after Sunday’s match, emphasizing the draw.

“That’s three matches at home and two draws that could perfectly be two victories,” Mourinho was quoted as saying. "And it’s a big punishment because we look to the table and it’s difficult to believe after scoring so many goals and playing so well that we only have eight points.”

Putting aside the disappointment, Spurs will continue its season with the UEFA Europa League group stage match against LASK, an Austrian football club,10 p.m. on Friday local time, or 4 a.m. on Friday morning. Spurs are in Group J.