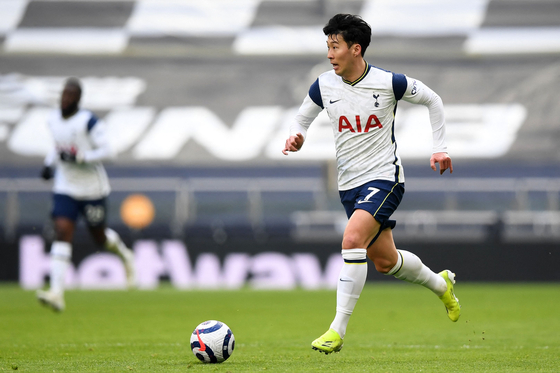 
Tottenham Hotspur returned to its winning ways after a 4-0 victory over Burnley, with Son Heung-min assisting two goals and being chosen as the King of the Match.

On Sunday, Tottenham won 4-0 against Burnley in the 26th round of the 2020-21 English Premier League kickoff at its home stadium in London with goal streaks from Gareth Bale (two goals and one assist), Harry Kane and Lucas Moura. Tottenham, which had been in a slump of five losses in their previous six league matches, shifted the mood by avoiding another consecutive loss.

Bale made an opening goal after only two minutes, converting Son's low cross from close range with his right foot. After the two made the first goal, Son and Bale celebrated the goal by making a "K" and a "W," symbolizing their homelands: Korea and Wales.

At 15 minutes, Bale's long pass allowed Kane to net Tottenham's second from the penalty box. Moura added a third just past the half-hour mark with a low shot from Sergio Reguilon and seized the opportunity.

In the 10th minute of the second half, Son and Bale shined again. Son was the architect for the fourth goal as he ran at the Burnley defense before giving an unmarked chance to Bale, and the Wales forward curled a fine finish into the far corner to seal the emphatic win.

Meanwhile, Son was chosen as the King of the Match in an online fan vote.

The King of the Match goes to the best performer of both teams in each game, and is selected through an online fan vote. At the end of the match, the top five players from each team are nominated based on Fantasy Points, and fans have 15 minutes to vote for the King of the Match. Of 23,896 fan votes in total, Son garnered the highest with 55.3 percent, beating Bale, who scored two goals and one assist, with 39.3 percent.

Although Son failed to make a goal, he was selected for greatly contributing to Tottenham's victory by recording seven key passes and three decisive scoring opportunities, according to EPL.

Son's personal record also increased to 13 regular goals and 8 assists in the Premier League. His total offensive points across all tournaments reached 33 (18 goals and 15 assists), setting a new personal record for a single season.

The football statistics website WhoScored.com gave Son an 8.9 rating, which is the second highest score in the team after Bale with 9.6. Kane followed with 8.7 points.

Tottenham have London derbies in both their next two matches, going to Fulham on Thursday, March 4, and then hosting Crystal Palace on Sunday, March 7.

Meanwhile, Spurs will be back in action for the first leg of the Europa League Round of 16 on March 12, taking on Croatian side Dinamo Zagreb. Tottenham advanced to the Round of 16 at the Europe League on Feb. 24, beating Wolfsberger 4-0 at Tottenham Hotspur Stadium in London.