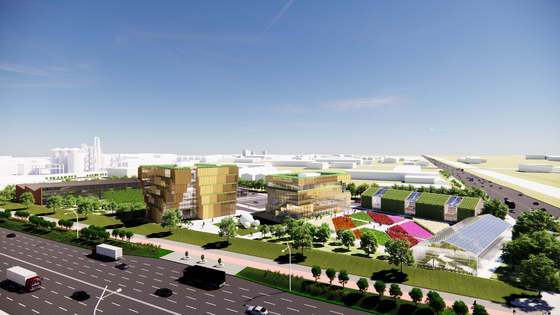 A concept image of the ’SK Town“ business cluster in Saemangeum. [SK BROADBAND]

Due to the worldwide spread of Covid-19, internet usage and data traffic including contactless services, online lessons and streaming services have been increasing rapidly. Zoom, the popular web conference solution for instance, saw its data traffic explode by 535 percent over the same period compared to the previous year.

Meanwhile, in the 2018 United Nations Climate Change Conference (COP 24) held in Poland, the European Union unveiled its plan to go carbon neutral with net-zero emissions by 2050. The EU has committed to achieving its ambitious target including 60 percent reduction in carbon emissions and 40 percent increase in carbon capture.

Amid concerted efforts against climate crisis, the data center industry has also been requested to reduce its impact on climate change from local communities across the world, since data centers are responsible for substantial amounts of energy consumption and carbon emissions. These recent trends will be applied to Korea’s data center market, yet there are no notable signs of rethinking corporate social responsibility in carbon emissions. Considering the nature of this cloud server provision industry, it is not hard to imagine the difficulties. To be called a hyper-scale data center, it needs to secure at least 100 thousand servers and 10 thousand racks in a 22,500-square-meter (242,188-square-foot) area, while having the flexibility to accommodate any needs for interchanging data center’s system memory, network and storage. Typically, data centers emit huge amounts of heat from thousands of servers which require cooling. Thus, many global cloud providers are utilizing cold air and sea water to reduce cooling expenses, and establishing hyper-scale data centers in suburban areas and using eco-friendly energy such as solar and wind power.

Korea has the world’s best level of network infrastructure competitiveness and the geographical advantage to emerge as Northeast Asia’s data center hub. Yet, finding a site that satisfies all required conditions for the global IT hub was a hurdle even in Korea.

Korea’s industrial electricity charge is around the OECD average level. It is lower than Japan, yet higher than Singapore and not-so-appealing compared to Hong Kong where special electricity fees apply to data centers.

Against this backdrop, SK broadband’s plan of building an eco-friendly, low carbon “green hyper-scale data center” utilizing 50 megawatts of sunlight generation in Saemangeum garnered attention. This data center plans to get 30 percent of its electricity from renewable energy from the outset and to further increase the level of new renewable energy utilization up to 100 percent.

Additionally, with the help from SK group’s energy affiliate SK E&S, revolutionary energy conservation plans were made. The solutions will allow customers to reduce their power costs for data center operations by 30 percent compared to Hong Kong and by 50 percent compared to Tokyo.

SK broadband plans to complete establishing worldwide networks by December 2021 by setting up a backhaul connection of SJC2 submarine cable in Saemangeum which will connect seven Asian countries in 10 places and by installing fiber connection between Saemangeum to the Seoul metropolitan areas at the same time.

Through this, Saemangeum expects to secure the position as a city of submarine cable landing and network diversity while providing the world’s best internet connect services.

The land price of Korea’s metropolitan area is quoted at around 9 million won ($8,000) per square meter. Thus, building a 25-megawatt data center in the area incurs more than 60 billion won just for the land. Meanwhile, as the land price in Saemangeum is only around 180 thousand won per square meter, it provides users and investors with significant financial benefits, along with incentives such as tax benefits.

A venture cluster in Saemangeum, tentatively named SK Town, which will be constructed by 2025, will provide restaurants, parks and public spaces including a library complex. When the data service providers move in and operate their cloud data centers, the working environment of the area is expected to be improved. SK will invest 100 percent of the complex’s 200-billion-won worth of construction costs to vitalize the local economy.

SK broadband’s CEO, Jin-hwan Choi, mentioned, “By utilizing SK’s low carbon hyperscale data center model in Saemangeum, customers can achieve their targets to reduce carbon emissions while taking advantage of high quality networks. With constant investment and collaboration with the local government, Saemangeum could become one of the best locations for cloud operators.”