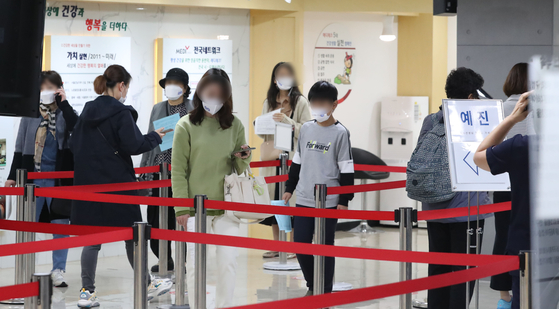 People line up for flu shots at a Korea Association of Health Promotion branch in Gangseo District, western Seoul, on Tuesday amid concerns over the safety of influenza vaccines following the recent mysterious deaths of a teenage boy from Incheon and an elderly woman from North Jeolla. [NEWS1]


A 78-year-old woman from North Jeolla who got her free flu shot was found dead less than 24 hours later, following the death of a teenager who was vaccinated recently.

The elderly woman got the influenza vaccine at a local clinic Monday morning around 8:30 a.m. and was discovered dead by a neighbor the following day in her home in Sangha-myeon, Gochang County, around 7:35 a.m., according to local officials.

The woman was said to have been administered a Boryung Flu VIII Tetra Vaccine produced by Boryung Biopharma.

This vaccine is not the same type that was recalled last month because a batch was stored at room temperature instead of being refrigerated. Nor is it related to another batch that was found to have impurities at another provincial public health center.

The Gochang County Public Health Center is checking all 99 people who were administered the flu shot at a private local clinic Monday. So far, 94 people said they had no unusual symptoms. The remaining five people either couldn't be reached or are undergoing checkups in person.

Choi Hyun-sook, head of the Gochang County Public Health Center, told the JoongAng Ilbo over the phone Tuesday, “We requested the Korea Disease Control and Prevention Agency [KDCA] investigate whether other individuals who also got flu shots on the same day had any strange reactions.”

Neighbors have said that the dead woman did not suffer from any pre-existing conditions such as high blood pressure or diabetes.

She did not look ill, or complain of feeling unwell after receiving the flu shot, according to the neighbor who reported her death.

This came after news broke Monday of a teenage boy from Incheon dying after getting a flu shot.

The 17-year-old high schooler, who received a free flu shot last Wednesday, died Friday morning. He did not show any abnormal symptoms before or after receiving the flu shot.

However, the teen was said to have told his family he felt “tired,” according to an ongoing investigation into the cause of death by health officials.

Jeong Eun-kyeong, commissioner of the KDCA, said in a briefing Tuesday that the boy had received a flu shot produced by Shinsung Pharm, “but it was confirmed that there were no issues with its delivery process” and was not the batch that had been recalled.

Likewise, the KDCA said that 32 people who received flu shots in the same clinic as the teenage boy did not show any symptoms out of the ordinary.

As of Tuesday, 82,668 people received the same vaccine as the dead teenager.

But despite health officials' assurances that flu shots are safe, people are still concerned as influenza season approaches.

Last month, a government project offering free flu shots to the nation’s vulnerable populations, including the elderly and children, was temporarily halted after issues with deliveries.

Health authorities detected that some vaccines distributed by Shinsung Pharm were left at room temperature as they were being shipped to medical facilities. The vaccines were supposed to be kept at temperatures between 2 to 8 degrees Celsius (35.6 to 46.4 degrees Fahrenheit) to sustain their potency.

Another 615,000 doses of flu shots were recalled by manufacturer Korea Vaccine earlier this month after the authorities confirmed white particles were found in vaccines in a public health center in Yeongdeok County in North Gyeongsang.