Stocks gain for third day on hopes for U.S. stimulus

Stocks gain for third day on hopes for U.S. stimulus 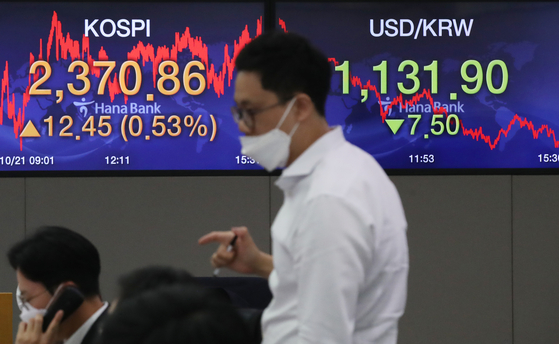 A screen shows the closing figure for the Kospi in a trading room at Hana Bank in Jung District, central Seoul, on Wednesday. [NEWS 1]


Stocks extended gains for a third consecutive session Wednesday as investors held out optimism for progress in the U.S. stimulus talks. The won rose against the dollar.

Trading volume was moderate at 802 million shares worth some 9.7 trillion won ($8.6 billion), with gainers outnumbering losers 675 to 183.

"Local stocks got a boost from U.S. peers, largely as optimism for the new stimulus plan has weakened the U.S. dollar and raised the investor appetite for risk," said Kiwoom Securities analyst Seo Sang-young.

The Kospi was boxed in a tight range since most of such anticipation was already projected in the stock prices in the previous sessions, he added.

Big Hit Entertainment, the management agency of K-pop phenomenon BTS, plunged 1.92 percent to 179,000 won on the fifth day of trading.

The local currency closed at 1,131.9 won per dollar, down 7.5 won from the previous session's close.