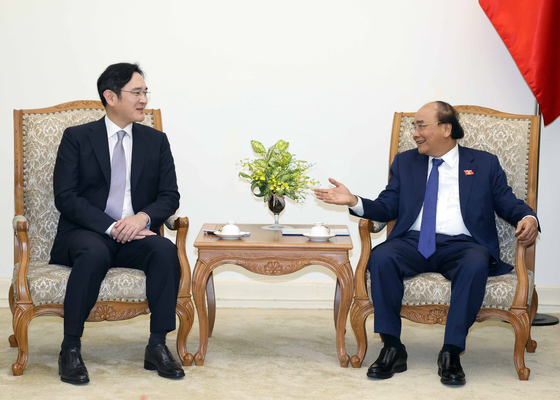 
The Vietnamese prime minister asked Samsung Electronics Vice Chairman Lee Jae-yong to build a new semiconductor production line in the country during a meeting in Hanoi, Vietnam, on Tuesday.

It is still unclear how Lee responded to the proposal, following a similar request last year when they met in Seoul.

The prime minister pledged a wide range of incentives if Samsung decides to establish a new chip factory in Vietnam.

Still, Lee said that he considers Vietnam Samsung's main research and development (R&D) base as well as a manufacturing hub as the electronics maker started constructing a new research center there.

He said that the Hanoi-based R&D facility will be operational by late 2022 as scheduled and will create jobs for 3,000 engineers.

Vietnam is home to two of Samsung’s smartphone plants, an appliance factory and an R&D center.

At the reception, Lee also thanked the Vietnamese government for granting visas to over 3,000 Samsung engineers despite Covid-19 border restrictions.