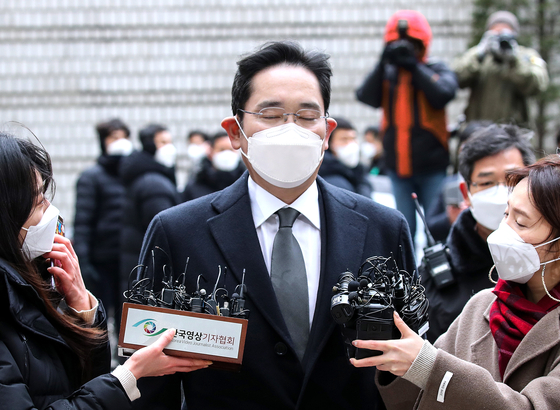 Lee Jae-yong is interviewed by reporters ahead of the verdict being read at the Seoul High Court in Seocho-dong, southern Seoul, on Jan. 18. [WOO SANG-JO]


In a move that may ultimately be little more than symbolic, the Justice Ministry notified Samsung Electronics Vice Chairman Lee Jae-yong, who is currently serving a 30-month jail sentence for bribery and other related offenses, that he is barred for five years from working at a public institution or at any entity connected with the crime.

A formal note was sent Wednesday to Lee informing him of these conditions, according to an official from the justice ministry.  Lee, who lost his Samsung Electronics board seat in late 2019, is serving time for bribing former president Park Geun-hye.

The Act on the Aggravated Punishment of Specific Economic Crimes stipulates those convicted of embezzlement greater 500 million won ($451,373) are prohibited from working at entities connected with the embezzlement. Exemptions are possible by order of the president, the Minister of Justice or a committee at the Ministry of Justice.

In the past, the impact of the law has been mixed.

“The notice is an initial statement that is sent to all financial criminals who embezzled more than 500 million won,” said a source with knowledge about Lee’s situation. “But based on the previous cases, the restriction is most often applied to the people trying to land a new title after release or a board member position.”

Hanwha Chairman Kim Seung-yeon retreated from leadership roles in 2014 after he came under the employment restriction rule.

SK Chairman Chey Tae-won continued his role even after the Justice Ministry imposed the restrictions, with the company claiming that it was permitted as Chey did not receive any compensation for his work.

Lee has not received compensation from Samsung Electronics since 2017, when the court began hearing the case against him.