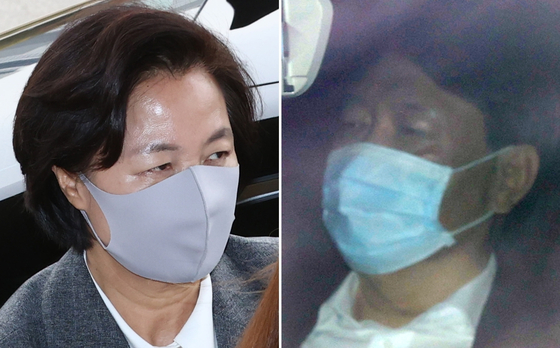 Justice Minister Choo Mi-ae, left, enters the Government Complex in Gwacheon, Gyeonggi on Wednesday. Prosecutor General Yoon Seok-youl sits in his car on the way to the Supreme Prosecutors' Office on Wednesday. [YONHAP]

Choo posted a message on Facebook Wednesday criticizing the prosecution for conducting a politically biased investigation into Lime Asset Management’s suspected criminal lobbying activities. The implication was that Yoon was deliberately refraining from going after opposition politicians caught up in the Lime scandal.

“Although Kim also told prosecutors about lobbying of an opposition politician and prosecutors, the information was only verbally briefed to the district office head, and everyone else was kept in dark,” Choo continued. “No report was made to the Ministry of Justice and the anticorruption investigation department of the Supreme Prosecutors’ Office.”

Choo said the people have lost faith in the prosecution’s integrity. “As the minister, I apologize to the people about the current situation,” she wrote.

Choo complained that the opposition and media were wrongfully criticizing her. She said they should have criticized the Supreme Prosecutors' Office for deceiving the people.

“Before getting angry that he was facing a smear campaign, the prosecutor general should have issued an apology and looked back on his leadership,” Choo also wrote.

Her message was posted on the eve of Yoon’s scheduled appearance at a National Assembly audit of the Supreme Prosecutors’ Office. According to sources in the prosecution, Yoon decided to attend the session and tell lawmakers his views on the ongoing war between him and Choo.

Tensions between Choo and Yoon reached a new peak this week, when Choo ordered Monday that Yoon must stay away from two controversial investigations — one into the Lime scandal and another of Yoon’s own family. She ordered the district offices in charge of the investigations to exclude Yoon from those probes and only brief him about the final outcomes.

Although Choo effectively deprived Yoon of his powers to supervise the prosecutors for a second time in three months, Yoon remained pokerfaced.

Sources in the prosecution told the JoongAng Ilbo on Tuesday that Yoon decided to address the situation at the National Assembly audit on Thursday. They said he particularly wanted to address the ministry and ruling Democratic Party (DP)’s challenging of his political neutrality.

Yoon is also expected to discuss the weakened ability of the prosecution in investigating complex financial crimes due to Choo’s reform measures, the sources said.

As soon as Choo took office as minister of justice in January, she dismantled an interagency investigation team specializing in crimes in the capital markets. She shut down a joint investigation unit for securities crime of the Seoul Southern District Prosecutors’ Office, comprised of elite members of the prosecution as well as the Financial Supervisory Service, Financial Services Commission, National Tax Service, Korea Exchange and Korea Deposit Insurance Corporation. During its six years in operation, the team indicted 956 suspects on charges of violating laws governing the capital markets.

When the prosecution launched a probe into the Lime scandal in February, Yoon asked the ministry to assign additional prosecutors, but his request was denied.

At the National Assembly audit, Yoon was expected to speak frankly about the prosecution’s ongoing probes into alleged corruption by his wife and mother-in-law, the sources said.

After Choo ordered Yoon on Monday to stay away from the Lime scandal probe, justice ministers and prosecutor generals from past administrations expressed concerns that their war is no longer about reforming the prosecution. They worry that Choo and Yoon are engaged in political mudslinging.

Excluding Yoon from the probe into the allies of the administration and appointing pro-government prosecutors selected by Choo to investigate the case will damage the investigation’s integrity, the former justice minister said. “It’s better to appoint an independent counsel or the new investigation agency for senior public servants to investigate this case,” the official said.

A former prosecutor general from the Roh government said the time has come for rank-and-file prosecutors to act.

“The minister is abusing her powers,” he said. “If prosecutors remain silent, they are no different from soldiers who put down their rifles. The prosecutors are given swords to fight injustice. Prosecutors who only protect their own skins are not true prosecutors.”

The Blue House and the ruling party are supportive of Choo. “The president was not briefed by Choo about her plan to order Yoon to stay out of the probes,” Kang Min-seok, presidential spokesman, said Tuesday. “But under the current circumstance, her action was unavoidable, because we need a speedy, fair and thorough investigation [into the Lime scandal].”

DP Chairman Lee Nak-yon also said Wednesday that Choo has “democratically regulated the abuse of the prosecutors’ powers” by ordering Yoon to stay away from the controversial probes.