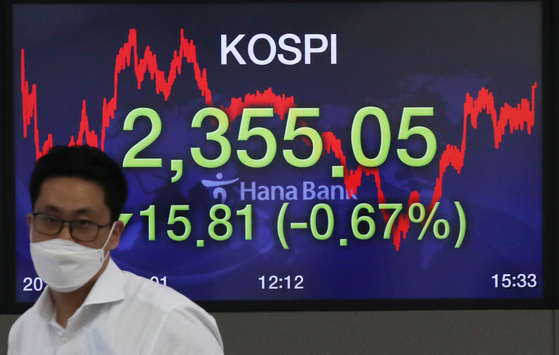 A screen shows the closing figure for the Kospi in a trading room at Hana Bank in Jung District, central Seoul, on Thursday. [NEWS 1]


Stocks ended a three-day winning streak Thursday amid lingering uncertainties over a new stimulus push in the world's largest economy. The won fell against the dollar.

Trading volume was moderate at about 802 million shares worth some 9.6 trillion won ($8.5 billion), with losers outnumbering gainers 543 to 303.

Local stocks got off to a weak start and tumbled over 1 percent at the day's lowest, largely on long-stalled stimulus talks in the United States, one of Korea's largest trade partners.

The local currency was trading at 1,132.9 won against the dollar, up 1.0 won from the previous session's close.