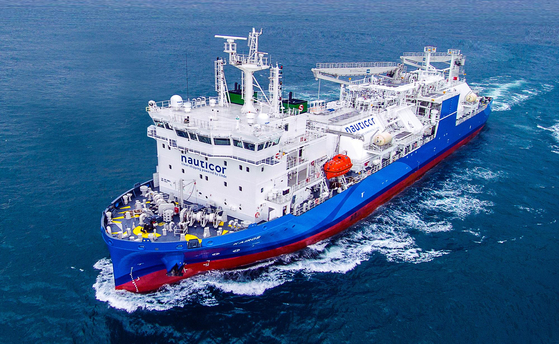 The LNG Bunkering vessel built by Hyundai Mipo Dockyard was delivered to Germany in 2018. This vessel has a similar outlook as the planned liquefied hydrogen carrier. [YONHAP]


Hyundai Glovis on Thursday said the blueprint for the liquefied hydrogen carrier that it developed with Korea Shipbuilding & Offshore Engineering (KSOE) and Hyundai Mipo Dockyard has received an approval in principle (AIP) from the Korean Register of Shipping and Liberia, the flag state of the vessel.

Korean Register and Liberia gave the approval to the blueprint for the 20,000-square-meter (215,278-square-foot) commercial liquefied hydrogen carrier that the global logistics and distribution company and the local shipbuilders developed.

Stakeholders from the participating organizations attended the ceremony for the AIP, which took place in Jongno District, central Seoul, on Thursday.

In order to transport hydrogen on a mass scale, the liquefaction process is essential for reducing the volume and enhancing its safety. Liquefied hydrogen is one eight-hundredth the size of hydrogen gas and is therefore compact and cost-effective.

AIP signals the confirmation of the blueprint’s safety and efficacy, and it is the foundation of the shipbuilding process. The blueprint will likely serve as the technical standard during the construction of the carrier.

Before announcing its participation, Hyundai Glovis in September signed a memorandum of understanding with Tonsberg, Norway’s Wilh. Wilhelmsen Holding to expand its eco-friendly energy business.

In May, Hyundai Glovis commenced joint construction with the shipbuilders. The project is expected to use Hyundai Heavy Industries’ shipbuilding technology and Hyundai Glovis’ traffic data. It is also working with G-Marine Service on safety.