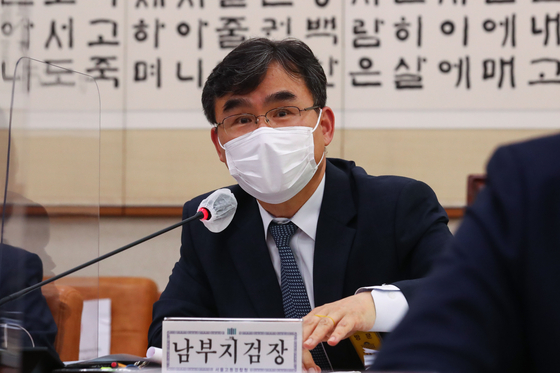 
A top prosecutor in charge of a controversial investigation into suspected fraud and illegal lobbying activities by the country’s largest hedge fund, Lime Asset Management, tendered his resignation Thursday, accusing the justice minister of tainting the prosecution’s integrity.

Park Sun-cheol, head of the Seoul Southern District Prosecutors’ Office, made the surprise announcement that he is stepping down by posting a statement on the intranet of the prosecution Thursday morning.

In the statement, Park said he has overseen the district office’s investigation into Lime Asset Management since he assumed his post in August. The primary goal of the prosecutors was investigating Kim Bong-hyun, a key suspect in the hedge fund’s collapse, which cost investors 1.5 trillion won ($1.3 billion) in losses, and indicting him on charges of embezzlement and fraud, Park wrote.

“His suspected illegal lobbying activities are just one part of the probe,” Park wrote. “And yet, Kim released two statements ahead of the National Assembly’s audit, making the public question the integrity of not only the probe but also the prosecution altogether.”

Earlier this month, Kim released two statements to the media arguing that he had bribed politicians on both sides of the political aisle as well as some prosecutors. He said the prosecutors were only going after politicians from the ruling Democratic Party (DP), while turning blind eyes to the members of the opposition and the prosecution.

Following Kim’s announcements, Justice Minister Choo Mi-ae questioned Prosecutor General Yoon Seok-youl’s political neutrality and used her power to exclude him from two controversial probes — one into the Lime scandal and another into Yoon’s family.

In his statement on Thursday, Park challenged her decision. “The reasons she cited as grounds for her order are not true,” he said.

Park said the district office has conducted an impartial probe and will continue to do so. He said the investigation team became aware of the suspected bribing of prosecutors only after Kim made the accusation. Yoon was also briefed in May by Park’s predecessor about Kim’s suspected bribing of an opposition politician, and an investigation into the allegation has progressed significantly, he said.

Park criticized Choo for questioning Yoon's integrity. “The prosecutor general had already recused himself from the probes into his family,” Park said. “So, the order to exclude him from the investigation makes no sense.”

Park said he had firsthand experience on how the ruling and opposition parties and media politicized an investigation and a prosecutor when he probed Yoon’s mother-in-law on charges of falsifying a bank statement as head of the Uijeongbu District Prosecutors’ Office in March.

“What can the prosecution do to be fair? The investigation team probed the case without any political consideration and indicted her,” Park continued, adding that the media labeled him an ally of Choo ever since he indicted Yoon’s mother-in-law.

Park said that was demeaning, although he had spent a 26-year career upholding law and order. “No matter what outcome we present, its integrity will be doubted,” he said. “I beg you to have faith in us.”

“The prosecution is obscured by politics,” Park said. “Now, I will relinquish my title as a prosecutor.”

Three hours after Park posted his resignation letter, Justice Minister Choo issued a statement expressing regret. She said she will quickly appoint a successor in order to minimize any impact on the probe.

Meanwhile, Prosecutor General Yoon attended the National Assembly’s audit of the prosecution and faced lawmakers’ questions. As ruling party lawmakers grilled him about his resistance to Choo, Yoon made clear his displeasure with how she runs the prosecution and the Justice Ministry. 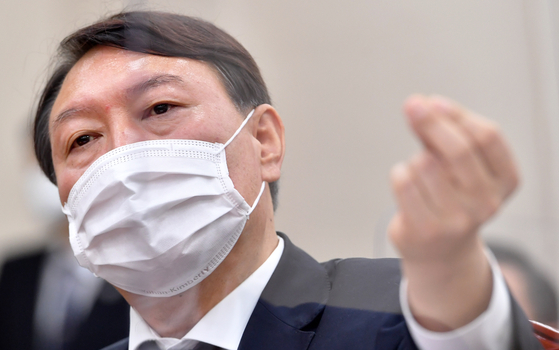 Yoon also criticized Choo for issuing the order on Monday to exclude him from the two probes. “It is really nonsensical to deprive the prosecutor general of his power to supervise an investigation and threaten the prosecution based on one story of a person who is expected to be convicted of heinous crimes,” he said.

Yoon said he still believes in President Moon Jae-in’s advice to him that he must not be afraid of investigating the powers that be, including members of the current administration. He, however, said, “You have to accept disadvantages for going after such people.”

The prosecutor general, handpicked and appointed by Moon in July 2019, has been at odds with the administration since he allowed probes into former Justice Minister Cho Kuk. Cho stepped down from the cabinet after 35 days in October 2019 to face investigations into financial and academic corruptions concerning him and his family.

Yoon told the lawmakers that Moon sent him a message after the April 15 general elections that he must complete his two-year tenure. Yoon’s term ends in July 2021.

Asked about suspicions that his wife had accumulated wealth through illegal means, Yoon said she was already rich by the time he married her. Yoon married Kim Kun-hui, an art event planner, in 2012.