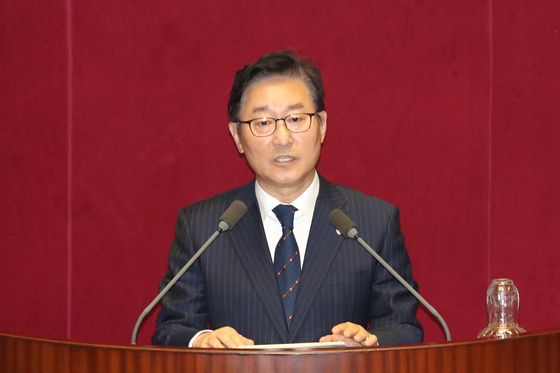 Presidential Chief of Staff Noh Young-min, Policy Chief Kim Sang-jo and Senior Presidential Secretary for Civil Affairs Kim Jong-ho also offered their resignations Wednesday to take responsibility for their parts in the war between Choo and Prosecutor General Yoon Seok-youl and a failed real estate policy. Moon will take time to decide whether he accepts the resignations, the Blue House said.

“They expressed their intentions to step down in order to allow the president to run the country, starting off with a clean slate,” Chung Man-ho, senior presidential secretary for public affairs, said Wednesday.

Moon’s decision to name a new justice minister and likely replacements of the Blue House aides came as the administration’s war against the top prosecutor seemed to be ending in defeat. Choo, appointed justice minister in January, spearheaded a campaign against Yoon to force him from office, but the war only pulled down the president's approval rating. Moon, who started his term in May 2017, managed to have a 62 percent approval rating on his third anniversary last May, only to see his public support plummet to a record low of 36.7 percent last week. Meanwhile, Yoon emerged as a clear frontrunner for the race to succeed Moon in 2022, beating two potential challengers from the ruling party.

Earlier this month, Choo invoked a disciplinary process to force Yoon out at least temporarily, but the prosecutor general won a court injunction and returned to his job after eight days. Local media largely reported it as Yoon’s victory in the war waged by the Moon administration.

Choo tendered her resignation on Dec. 16, when she recommended the president suspend Yoon.

The Blue House said it has high expectations that Park will complete the administration's campaign to bring reform to the criminal justice system.

“Park is a former judge and a three-term lawmaker, and he has worked to resolve various irregularities in our society and advance democracy,” Chung said. “We believe he will complete the reform of prosecutorial and judicial affairs […] based on the knowledge and experience accumulated through his careers in the judiciary, government and National Assembly, expertise in law and strong will power.”

Chung said Park and Han will go through non-binding National Assembly hearings before their appointments. Hwang will start his term as of Thursday.

Park, 57, is a native of Yeongdong, North Chungcheong. He studied law at Yonsei University and passed the bar exam in 1991. He and Prosecutor General Yoon Seok-youl were classmates at the Judicial Research and Training Institute. They joined the two-year program in 1992.

He won his first legislative victory in 2012 from Daejeon, and was re-elected twice.

“The reshuffle was aimed at seeking stability and creating tangible outcomes in the later years of Moon’s term,” a senior presidential aide said.

A shakeup in the Blue House is expected to follow. “The three aides tendered their resignations today, and the president said he will seriously think about them,” a presidential source said.

Presidential Chief of Staff Noh has been serving in his post since January 2019, and speculation was high that Moon will accept his resignation in early January before he hosts a New Year’s press conference.

According to a source, Senior Presidential Secretary for Civil Affairs Kim Jong-ho offered to step down to take responsibility for the controversy surrounding the Ministry of Justice’s disciplinary process to suspend Yoon. Kim only served in the post for four months. He was named in August to succeed Kim Jo-won, who left after the government forced senior public servants to sell extra residences as a sign of their commitment to Moon’s war on real estate speculators. He owned two expensive apartments in southern Seoul.

Policy Chief Kim Sang-jo was also taking flak for his failure to cool the real estate market. Public criticism was also rising for his role in the government’s tardy procurement of Covid-19 vaccines.