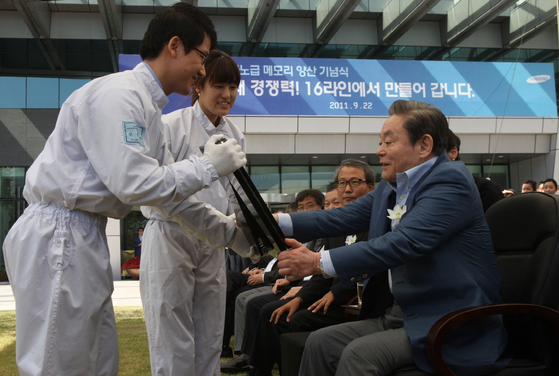 Lee Kun-hee, right, is given the first semiconductor wafer manufactured at a production line in Samsung's Nano City, one of Samsung’s main chip manufacturing bases in Gyeonggi, in September 2011. [NEWS1]

Lee Kun-hee, the man responsible for the Samsung Group the world knows today, will go down in management books for a single quote.

At an emergency meeting of company executives in Frankfurt in 1993, Lee said the company needed a new philosophy. Change had to be embraced.

“Change everything,” he told his people, “except your wife and children.”

The comment was the result of many factors, but one was Lee’s shock at seeing a Samsung TV collecting dust at a Best Buy in Los Angeles.

Samsung had solidified its position as the leading company in Korea. Lee wanted to be that big on the global stage. It was in Frankfurt that he told his managers how he intended to do it: by embracing a perennial sense of crisis.

Lee believed that companies easily forget that whatever succeeds today will be obsolete tomorrow. An eternal crisis mentality was the only way to avoid that trap: to forestall complacency, promote innovation and ensure continuing success.

Many industrialists in history have tried to inculcate such a spirit in their companies. Few have done it so well as Samsung’s Lee Kun-hee.


Quality over quantity
Lee was also famous for setting fire to 150,000 mobile phones because of their poor quality. 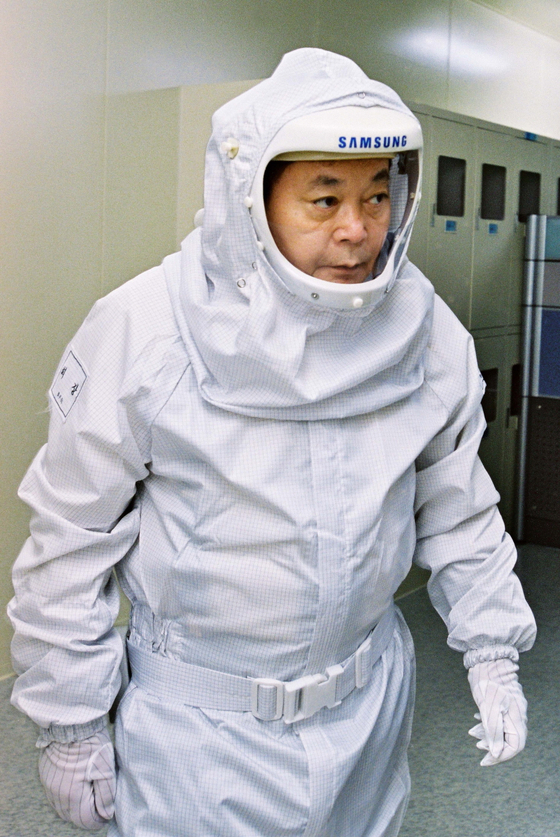 Samsung Group Chairman Lee Kun-hee dons a protective "bunny suit" during a visit to a semiconductor facility in 2004. [SAMSUNG]

That was in 1995. “The quantity and quality ratio should not be five to five or even three to seven, it should be zero to 10,” Lee was reported to have said. “For the sake of quality, quantity should be sacrificed.”

After the bonfire, the defect rate for Anycall-model phones dropped from 12 percent to 2 percent.

Despite a soft-spoken manner, Lee was aggressive and never settled for second place.

Another one of his famous quotes is that no one remembers a runner-up. He demanded his employees work to make Samsung products world leaders.

Despite inheriting the leadership of one of Korea’s biggest business groups from his father, it was Lee who put Samsung Group on the global stage during the 33 years of his reign.

It was Lee who foresaw the future of technology and turned the conglomerate from traditional industries to industries of the future — starting with semiconductors.

Although it was his father who announced in 1983 that Samsung Group was entering a semiconductor field dominated by American and Japanese companies — in what became known as his Tokyo Declaration — it was Lee who steered that investment into the DRAM semiconductor business, one of the riskier areas. 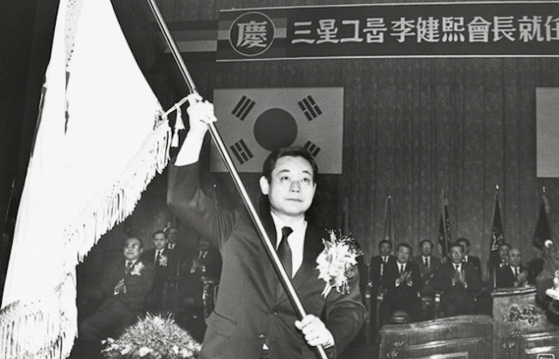 Samsung opened a new era for Korea’s semiconductor industry when it debuted a 64K DRAM in December of 1983.

While the 8-inch wafer was considered to have a higher productivity than the common 6-inch, it was considered a risky move by American and Japanese competitors.

The move paid off — and generated huge operating profits for Samsung Electronics.

It ranks top in other areas including smartphones, OLED displays and TVs.

Samsung grew exponentially under Lee in the three decades until he suffered a heart attack in May 2014.

Its market capitalization has surged from 900 billion won to 318.8 trillion won.

Samsung affiliates have more than doubled from seven to 16.


Lonely childhood
Lee was born on Jan. 9, 1942. He was the second-youngest of eight children after his little sister Lee Myung-hee, chairwoman of Shinsegae, the retail empire. 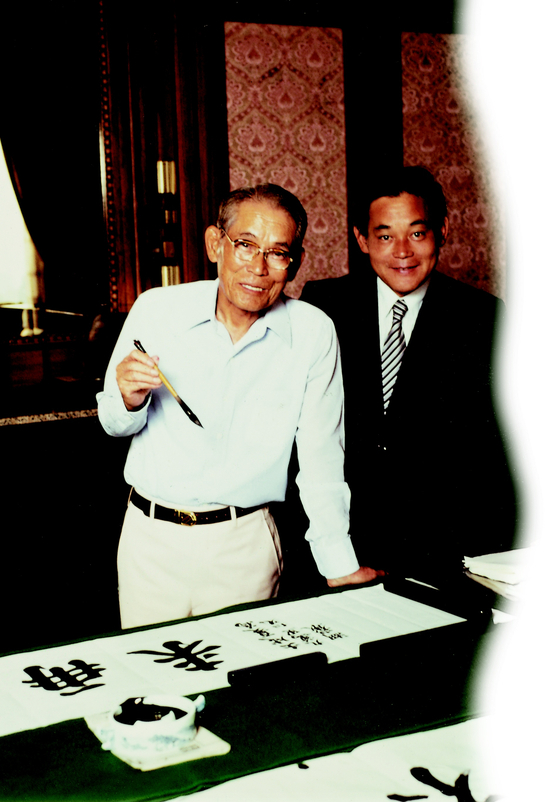 
He had two older brothers and three older sisters.

Lee was said to have been a lonely child. For his first six years, he was raised by his grandmother, who lived in Uiryeong County, South Gyeongsang. The father and son were said to have met once a year.

It was when Lee was six years old that he joined his family, which moved to Seoul from Daegu.

In 1953, when he was in the fifth grade, Lee was sent to Tokyo to study. He had to share rooms with his elder brothers who were attending college. The father wanted his sons to learn about the advanced world.

But Lee’s brothers were much older than him, and he remained to himself. It was said around this time Lee started to take interest in dogs and fell deeply into movies.

Although he returned to Seoul to attend high school, his father again sent the young Lee abroad for university. Lee attended the prestigious Waseda University in Tokyo, where he started to learn about business.

He is also known to have been a car aficionado. He liked driving them but also tearing the vehicles apart and reassembling them.

He had a professional mechanic’s understanding of cars. And it was this passion for cars that led to the creation of Samsung Motor, which was sold to the Renault Group during the 1997 Asian economic crisis.

While Lee seemed cautious and timid when in public, the case was the opposite when it came to business.
He spoke his mind, even if it rankled the powers that be.

During a 1995 press conference in Beijing, Lee vented his frustration over the Kim Young-sam government. 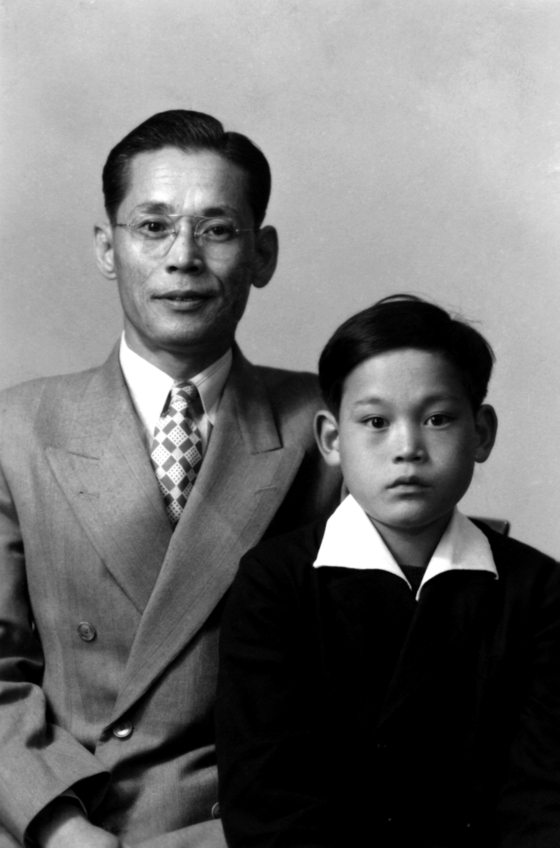 “The government seems to think that they have eased many administrative regulations but under this administration there hasn’t been a major change,” Lee said.

Classmates like the late politician Hong Sa-duk, who passed away in June, recalled that while Lee could be quiet, he never backed away from a fight.


Love of sports
It is known that Lee also had a strong interest in sports. While studying in Japan, he took up wrestling. In high school, Lee was on the wrestling team for two years and he even won a national wrestling match.

Lee was also known to enjoy horseback riding, golf and baseball. The Samsung team based in Daegu was founded in 1982. 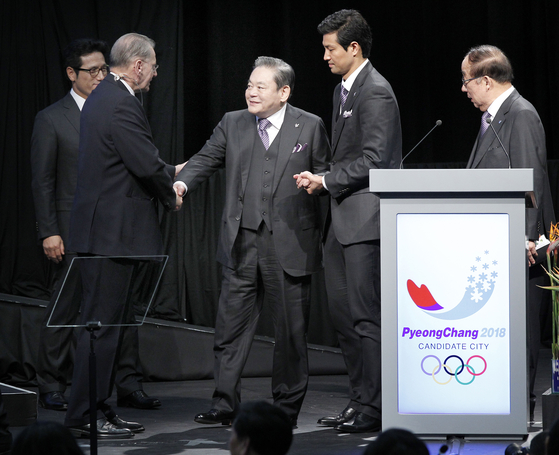 Lee shakes hands with Jacques Rogge, president of the International Olympic Committee from 2001 to 2013, following his presentation in July 2011 to bring the Winter Olympics to Pyeongchang. [YONHAP]


One of his biggest contributions to sports was as an International Olympic Committee (IOC) member, and helping Korea win the PyeongChang Winter Olympics in 2018.

Lee became a member of the IOC in 1996 and Samsung Electronics became the official marketing partner of the Olympics in 1997.
To promote Korea’s bid for the Winter Olympics, he spent 170 days overseas.


What’s next?
The baton has now been passed to the third generation in Korea’s biggest family-run business.

Lee’s eldest son Lee Jae-yong has been the de facto chairman of the group since his father suffered a heart attack six years ago. He will assume his role as chairman of Samsung Group officially soon.

Lee Jae-yong is in charge of the core Samsung businesses including Samsung Electronics, Samsung C&T Corporation as well as key financial affiliates like Samsung Life Insurance.

The second child, Lee Boo-jin, has been heading Hotel Shilla. The youngest, Lee Seo-hyun, is currently head of the Samsung Foundation.
One problem is how to dispose of Lee’s shares in the Samsung Group. 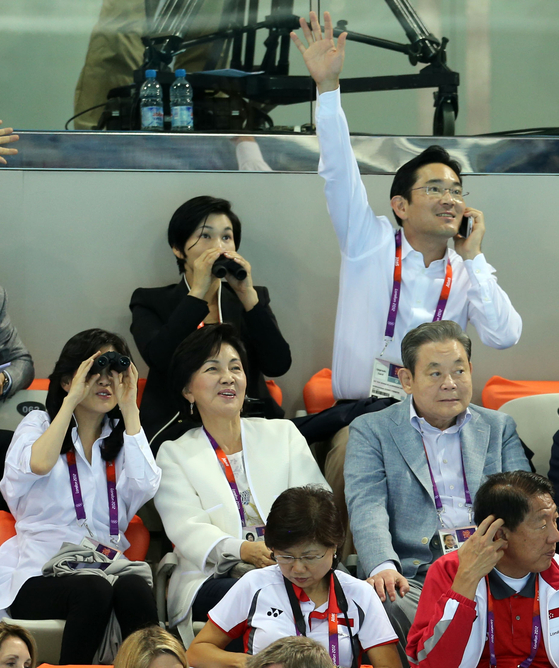 Lee and his family watch the men’s 400-meter freestyle at the Olympic Park in London during the London 2012 Summer Olympics. [YONHAP]


According to the Korea Exchange, Lee Kun-hee owned roughly 18.2 trillion won worth of Samsung stock at current values, making him the wealthiest shareholder in Korea.

However, even if Lee Jae-yong inherits his father’s stake in the life insurer, he may be forced to sell it. This is particularly so as the regulators and politicians have been calling for more separation between the finance and manufacturing industries.

The junior Lee in May announced that he will no longer commit any acts that would raise ethical issues over inheriting control of the company, raising the possibility of him selling off his father’s holdings in the life insurer.

The cost of inheriting the chairman’s shares is exceptionally high.

Under current law, a maximum 50 percent tax rate is applied when someone inherits 3 billion won or above.  .

That would mean that if Lee Jae-yong inherits his father’s shares, he might have to pay around 10 trillion won.