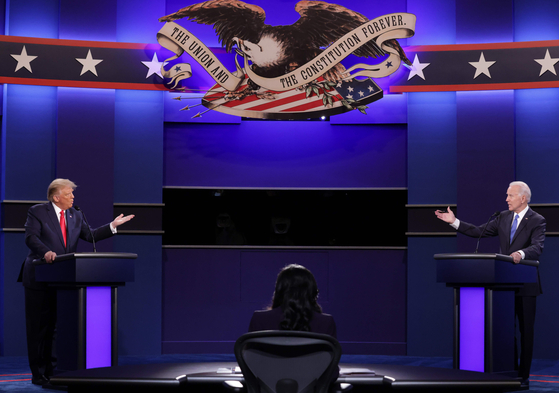 
Joe Biden, the U.S. Democratic presidential candidate, said he would meet with North Korean leader Kim Jong-un on the condition that Pyongyang draws down its nuclear capabilities.

Biden, when asked under what conditions he would meet Kim during the second and last U.S. presidential TV debate on Thursday, replied, “On the condition that he would agree that he would be drawing down his nuclear capacity to get there."

Biden, as he faced off Republican President Donald Trump, added, “The Korean Peninsula should be a nuclear-free zone.”

The former U.S. vice president said that Trump has “legitimized North Korea” and “talked about his good buddy who's a thug” while Pyongyang now has “more capable missiles, able to reach U.S. territory much more easily than [it] ever did before.”

Biden added that he would make it clear to China that “they had to be part of the deal” to denuclearize North Korea, to “make sure we can control them and make sure they cannot hurt us.”

In turn, Trump claimed he had been left “a mess” as he recollected former U.S. President Barack Obama telling him that “the biggest problem we have is North Korea” and “indicated we will be in a war with North Korea.”

Trump continued, “Guess what, it would be a nuclear war, and [Kim] does have plenty of nuclear capability. In the meantime, I have a very good relationship with him, different kind of a guy, but he probably thinks the same thing about me.”

He said, “Instead of being in a war where millions of people — Seoul, you know, is 25 miles away, millions and millions, 32 million people in Seoul — millions of people would be dead right now; we don’t have a war, and I have a good relationship.”

Seoul’s population is around 9.7 million people.

Trump went on to claim that Kim “didn’t like Obama” and wouldn’t meet with him.

Biden shot back, “We had a good relationship with [Adolf] Hitler before he in fact invaded Europe, the rest of Europe... The reason [the North Korean leader] would not meet with President Obama is because President Obama said: We’re gonna talk about denuclearization, we’re not gonna legitimize you, we’re gonna continue to put stronger and stronger sanctions on you.”

Trump met with Kim three times between 2018 and 2019. In the spirit of dialogue, North Korea halted nuclear tests and long-range missile launches in late 2017, but warned in late December last year that it could end that moratorium. On Oct. 10, North Korea flaunted a new intercontinental ballistic missile (ICBM) in a military parade marking the 75th anniversary of the founding of its ruling Workers' Party.

“I think everywhere in the world, the party that’s in power exaggerates its achievements,” said Charles Shapiro, the president of the World Affairs Council of Atlanta who served in the U.S. Foreign Service for over 25 years. “What you heard was President Trump taking credit for advances with North Korea, and Biden questioning those. I think that North Korea is in fact closer to building the ability to project nuclear weapons around the world than they were four years ago.”

Shapiro, speaking to journalists in a virtual reporting tour organized by the U.S. Department of State Foreign Press Centers, said Friday, “I think it’s fairly obvious... that North Korea is closer to having the delivery systems to deliver its nuclear weapons against the United States, and it’s going to be a challenge for the next administration, whether that is a Trump administration or a Biden administration.”

However, Shapiro noted that “foreign policy is really not part of our electoral campaign, not this year, not four years ago.”