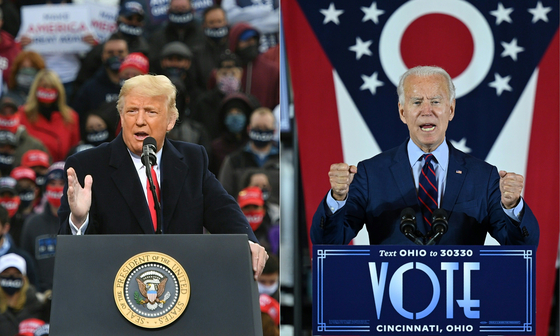 Korea has its eyes set on the outcome of the U.S. presidential election, which falls on Tuesday, as it will determine the direction of critical peninsula issues and the Seoul-Washington alliance in the years to come.

On the eve of the election, Republican candidate U.S. President Donald Trump and his Democratic rival Joe Biden are in a final campaign sprint in key battleground states.

As of Sunday, over 92 million U.S. citizens have already cast their ballots early. This record early-voting turnout is equal to 67 percent of the 136.5 million ballots cast in 2016.

The results of the high-stakes election could have a direct bearing on several key issues, including the stalled North Korean denuclearization talks, the renewal of the defense cost-sharing negotiations with Washington and the general tone of the bilateral alliance amid intensified Sino-U.S. rivalry.

A Biden presidency is expected to steer U.S. foreign policy away from the “America First” approach by the Trump administration over the past four years.

“As President, I'll stand with South Korea, strengthening our alliance to safeguard peace in East Asia and beyond, rather than extorting Seoul with reckless threats to remove our troops," former U.S. Vice President Biden wrote in an op-ed published by Yonhap News Agency on Friday.

The Trump administration has demanded Seoul to pay a higher contribution for the upkeep of U.S. troops stationed in Korea, and the two sides continue to struggle to strike a new deal despite their previous Special Measures Agreement which expired at the end of last year. Biden addressed concerns in Seoul after Trump threatened to reduce or withdraw U.S. troops in Korea as a bargaining chip.

On Pyongyang policy, Biden said that he will “engage in principled diplomacy and keep pressing toward a denuclearized North Korea and a unified Korean Peninsula, while working to reunite Korean-Americans separated from loved ones in North Korea for decades.”

Biden in this op-ed recalls his visit to Seoul in December 2013 to mark the 60th anniversary of the alliance, during which he stopped at the demilitarized zone at the inter-Korean border with his granddaughter. He expressed “profound respect for the Korean people” and their accomplishments since the 1950-53 Korean War and described South Korea as “a global leader” in the fight against coronavirus and “a strong ally in the region, to advance our shared prosperity, values, and security, and to meet global challenges.”

Trump since his 2016 campaign has often questioned the necessity of the alliance as he pushed his America First policy.

But the Trump administration has also been more enthusiastic toward dialogue with Pyongyang, aligning with the Moon Jae-in administration’s push for an end-of-war declaration and beginning a peace process on the Korean Peninsula.

In a turnaround to his "fire and fury" rhetoric against Pyongyang in his early presidency, Trump has built personal diplomatic relations with North Korean leader Kim Jong-un, resulting in their three historic meetings and a moratorium on nuclear and intercontinental ballistic missile testing since 2018.

The Barack Obama administration, in contrast, was known for its strategic patience approach to North Korea.

Trump often boasted, including in the last U.S. presidential debate, that he prevented “nuclear war” on the Korean Peninsula, stressing his “good relationship” with Kim.

Asked under what conditions he would meet North Korean leader Kim during last week's U.S. presidential debate, Biden replied, “On the condition that he would agree that he would be drawing down his nuclear capacity.” He stressed that the “Korean Peninsula should be a nuclear-free zone,” and also described Kim as a “thug.”

North Korean state media in the meantime have remained mum on the U.S. elections while continuing to lambast the South, though it has in the past shot insults at Biden, including describing him as an “imbecile” in May 2019. Kim has favored a top-down approach to the negotiations, and analysts expect that the North is likely watching and weighing its options.

“What President Trump and that part of the Republican party which supports him so strongly has really focused on [is] America is first, and that means ignoring the rest of the world, ignoring our traditional alliances,” said Charles Shapiro, the president of the World Affairs Council of Atlanta and a former U.S. ambassador to Venezuela, speaking to journalists during a virtual reporting tour organized by the U.S. Department of State Foreign Press Centers.

“So how is that going to change? If Trump is re-elected, clearly, it's not going to. That's how Biden is trying to draw a distinction between himself and President Trump.”

Over 59 percent of South Koreans surveyed preferred Biden, according to a Gallup Korea poll in September, compared to 16 percent in favor of Trump.

Biden leads in U.S. national polls, including the latest by Reuters, which showed Trump at 42 percent nationally compared to Biden's 51 percent. But many experts have warned the results may remain unclear for days or weeks after the polls close, as officials must count an unprecedented number of mail-in ballots due to the Covid-19 pandemic.

“Certainly, we're seeing a huge number of people vote by mail in a way we've never ever seen before across all of the states,” said Lonna Rae Atkeson, a political science professor and executive director of the Center for the Study of Voting, Elections and Democracy, speaking during a U.S. State Department Foreign Press Centers virtual briefing.

“One of the things that we're all expecting is larger numbers of rejected ballots than we've ever seen before because of the large number of people choosing to vote by mail,” Atkeson said. “If the race of course is not very close, that won't be very meaningful. But if the race is close, then those ballots become very meaningful and it could lead to other litigation after the election.”

She pointed out that the popular vote has in general aligned with the U.S. Electoral College vote. However, five presidents have won the election despite losing the popular vote, including George W. Bush in 2000 and Donald Trump in 2016.