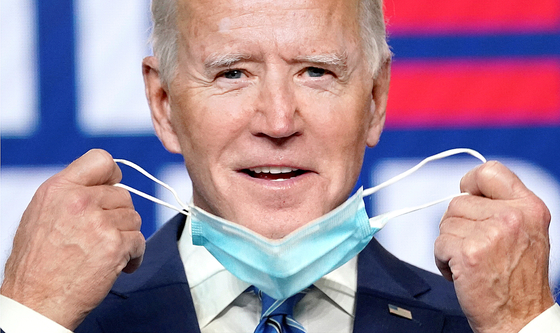 
The Korean government was preparing for all possible results of the U.S. presidential election and its impact on the bilateral alliance, the Korean Peninsula situation, regional security and the economy.

Democratic presidential candidate Joe Biden, the former U.S. vice president, looked to be narrowly in the lead Thursday, projected to have at least 253 of the 270 required Electoral College seats to win the election, and also held the popular vote lead. U.S. President Donald Trump held a projected 214 seats despite declaring premature victory Wednesday.

"After a long night of counting, it's clear that we're winning enough states to reach 270 electoral votes needed to win the presidency," Biden said speaking in Delaware Wednesday, stopping short of declaring victory. “I’m not here to declare that we’ve won, but I am here to report that when the count is finished, we believe we will be the winners.”

Trump in turn has threatened legal challenges, leaving the American presidential election outcome uncertain for days or possibly longer should it be contested as tallying of mail-in ballots continues.

Blue House spokesman Kang Min-seok said Thursday, “No matter what the outcome of the U.S. presidential election, our government will maintain the ironclad South Korea-U.S. alliance and continue cooperation to further advance it.”

He added that Korea will continue to “actively cooperate and closely communicate” with the U.S. administration cooperate “to achieve the denuclearization of Korea and a peace regime.”

President Moon Jae-in convened a National Security Council (NSC) later that day and was briefed on Korea’s preparation for the U.S. election outcome depending on several scenarios and also reviewed its impact on the Korean economy.

Korean Foreign Minister Kang Kyung-wha is scheduled to meet with U.S. Secretary of State Mike Pompeo in Washington next Monday to discuss regional and global issues, the Ministry of Foreign Affairs announced Thursday.

Kang will kick off a four-day trip to Washington Sunday and is also expected to meet members of Congress and experts at think tanks to discuss Korean Peninsula matters and other bilateral and regional matters.

She will be accompanied by Lee Do-hoon, Seoul’s special representative for Korean Peninsula peace and security affairs, who will hold talks with chief U.S. nuclear envoy Stephen Biegun, the deputy secretary of state.

Foreign Ministry spokesman Kim In-chul said in a press briefing Thursday that Kang and Pompeo will “discuss how to advance strategic communication between the two countries, reaffirm the ironclad Korea-U.S. alliance, and also hold in-depth discussions on the denuclearization and establishment of peace on the Korean Peninsula and efforts to strengthen the bilateral alliance.”

When asked if Kang will make contact with the Biden campaign, Kim replied, “The foreign minister will meet with administration officials in Washington and hold dialogue with people from all walks of life,” adding that “many things are being coordinated.”

This comes regardless of whether Trump is re-elected or Biden takes office on Jan. 20 next year, as Seoul continues to push to resume stalled denuclearization negotiations with Pyongyang while facing a slew of other issues such as renewing a bilateral defense cost-sharing deal with Washington.

Kang’s Washington trip comes on the invitation of Pompeo, who canceled a planned visit to Seoul last month after Trump’s coronavirus infection. Kang visited San Francisco in January, and the two envoys last met face-to-face in Germany in February.

The top diplomat addressed the confusion over the U.S. election results speaking at the National Assembly’s Foreign Affairs Committee Thursday, saying, “Regardless of the outcome, we will continue South Korea-U.S. cooperation and coordinate our diplomatic agenda.”

Kang explained to lawmakers that the Foreign Ministry had launched a task force to “detect the U.S. election trend and reviewed various scenarios on possible results.

“Regardless of whether Biden is elected or President Donald Trump is re-elected, there are dialogue channels that we have cultivated,” said Kang. “We will use such channels to continue Korea-U.S. coordination using such channels.”

Suh Hoon, director of the Blue House National Security Office, likewise said during a National Assembly audit Wednesday, “We have in our way done our utmost to prepare” for whomever becomes president of the United States.

The Korean government’s “consistent goal would be the complete denuclearization of North Korea,” he said, stressing “it is important not to delay the process toward peace on the Korean Peninsula as inter-Korean relations have been strained for a while now.”

He noted that "the goal will remain the same" on U.S. policy toward North Korea regardless of the election results but that the “approach” may change.

Suh said, “We have a foundation of many discussions and dialogue with President Trump’s side, and even if a Democratic administration is established, the Korean government also has a lot of experience with cooperating with the Democratic Party.”

While U.S. National Security Adviser Robert O'Brien had been expected to make a visit to Seoul later this month, the ambiguous election results may change that.

Ruling and opposition parties were also reviewing how to prepare for a possible new administration in the United States.

He added, “The U.S. presidential election results have a big impact on the global political and economic order. Depending on the result, the situation on the Korean Peninsula can change, and we may need to adjust our diplomatic and trade policy.”

Kim Chong-in, the interim leader of the main opposition People Power Party, said, “While we will have to wait and see the U.S. election results, it looks like a situation of confusion will continue for a while” noting that this “shows that it remains a big task for the United States to unite a divided country and people.”

He added, “Our government, based on the various election outcome scenarios, needs to set up pre-emptive measures for a security strategy.”

On a timeline of what to expect in the coming days, U.S. public opinion pollster John Zogby, the founder of John Zogby Strategies, said, “Best case scenario is that Thursday we will have some clarity, we will have a lot more votes in Pennsylvania that are counted, a lot more votes everywhere there are counted. […] I give that less than a 50-50 chance. Pennsylvania is a long and arduous process — they are expecting this process to take a pretty long time. This is before any disputes or automatic recounts.”

Zogby told journalists Wednesday in a virtual reporting tour organized by the U.S. Department of State Foreign Press Centers, “The more realistic scenario is to get some sort of count and projected winner by the end of this week, meaning Friday or Saturday. But then, you get into the recounts and the challenges. If there are no challenges, it is conceivable that we know who the next president is by the end of this week.”

However, he noted, “But because we already know from the president yesterday that if in fact he is the one who loses, that he will challenge this, that’s highly unlikely, and it will go to the courts and to the state legislatures, if possible.”

He said that there could be challenges made by both parties because there are a substantial number of people “on both sides who are not ready to accept the other guy winning.” 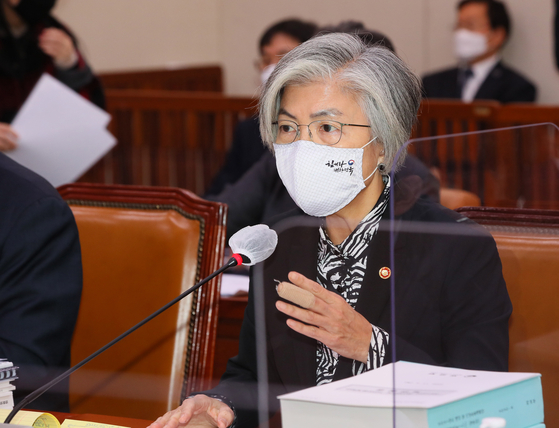 Korean Foreign Minister Kang Kyung-wha speaks at the National Assembly Thursday. She will make a trip to Washington to hold talks with U.S. Secretary of State Mike Pompeo next Monday. [YONHAP]