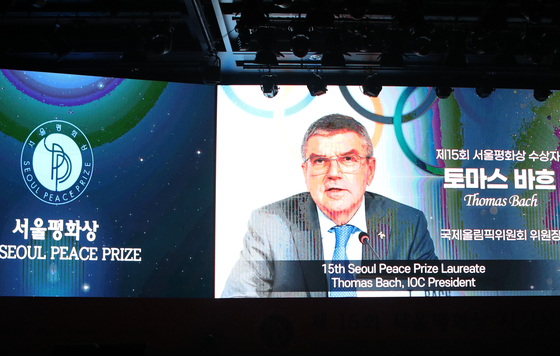 Bach, who decided not to attend the event in central Seoul in person due to concerns of traveling during the Covid-19 pandemic, joined the ceremony virtually from Olympic House in Lausanne, Switzerland. Former United Nations (UN) Secretary General Ban Ki-moon accepted the award on his behalf.

"I would like to thank the Seoul Peace Prize Cultural Foundation and the Selection Committee for this great honor,” Bach said. “This prize belongs to the entire IOC and the whole of the Olympic Movement, because without the support of so many around the globe, the achievements for peace through sport could never have been accomplished.”

Bach praised the Olympics as the only event that brings the entire world together peacefully, saying the Games “are a celebration of the unity of humanity in all our diversity, uniting the best athletes of all 206 National Olympic Committees and the IOC Refugee Olympic Team.”

In a separate interview with the Joongang Ilbo after the ceremony, Bach said that "the door is open" for North and South Korea to hold a joint Olympics, potentially in 2032, adding that the IOC has been "very impressed by the dedication of both delegations" in working to make the joint Games happen.

The Seoul Peace Prize was created in 1990 in recognition of the 1988 Seoul Olympic Games and seeks to “recognize those who have contributed to the establishment of a peaceful world with reconciliation, harmony and prosperity among peoples and nations,” according to the prize regulations.


Bach was praised by Yeom Jae-ho, chairman of the Seoul Peace Prize Cultural Foundation, for his work to promote the role of the IOC Refugee Olympic Team.

“He is a very rare president as he supports the refugees,” Yeom said. “The refugee issue is a very serious problem in the world and then he invited a lot of refugee athletes to the Olympic Games and that is a very good signal and importance for world peace.”

Yeom also thanked Bach for his role in both the 1988 Seoul Olympics and the 2018 PyeongChang Olympics, noting that although North Korea did not compete in the Seoul Games, Bach was instrumental in bringing the two countries together for the PyeongChang Games.

“Thanks to his help,” Yeom said, “North Korean athletes and the South Korean athletes came together and they participated in the PyeongChang Winter Olympic Games. So it is a very marvelous signal and the symbolic issue for world peace.”

Accepting the award on Bach’s behalf, Ban also praised the IOC president for his role in the historic event.

“It is still vivid in my memory,” Ban said, “and I think it will be the same to millions and millions of people around the world who have watched the entrance of joint South-North Korean teams in Pyeongchang and that was really exciting and inspiring and quite dramatic scenes which we have seen.”

The Seoul Peace Prize comes with a $200,000 reward, all of which Bach has pledged to donate to the Olympic Refugee Foundation and three other charities. Previous winners include former UN Secretary General Kofi Annan, German Chancellor Angela Merkel and Ban.