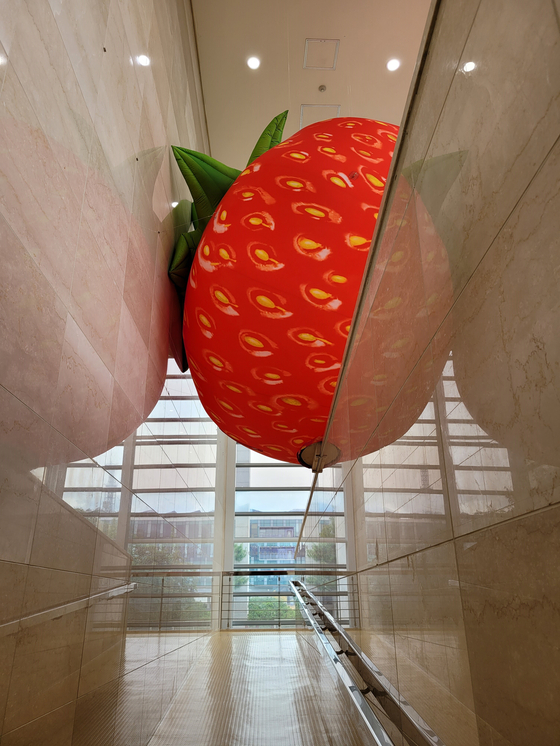 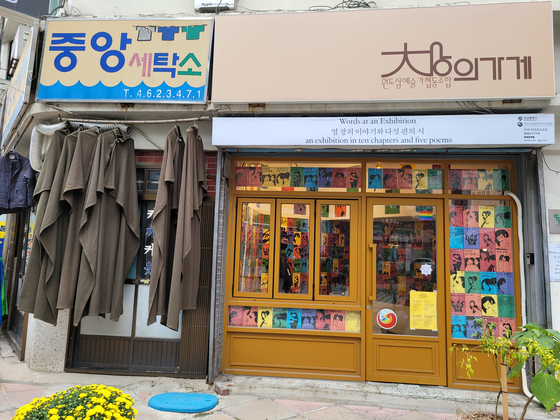 An empty store in the Old Town of Busan has been transformed into a tiny bookstore full of comics about the lesbian movement by Spanish artist Francesc Ruiz as part of the Busan Biennale. [MOON SO-YOUNG]


BUSAN, CHANGWON, SOUTH GYEONGSANG — Fall has been the best season for art lovers to travel through Korea, because of many art festivals in addition to the colorful landscapes and fantastic sunny weather unique to this season. Now the social distancing regulations have loosened after daily new Covid-19 cases fell, and two biennial exhibitions in major southeastern cities, the Busan Biennale and Changwon Sculpture Biennale, opened their doors to offline audiences early this month after running only online in September. Enriching the art scenes of the cities, the municipal museums also started major exhibitions last week. Among them are renowned American artist Bill Viola's first-ever large-scale retrospective in Korea at the Busan Museum of Art and famous Korean artist Choi Jeong-hwa's solo show at the Gyeongnam Art Museum. 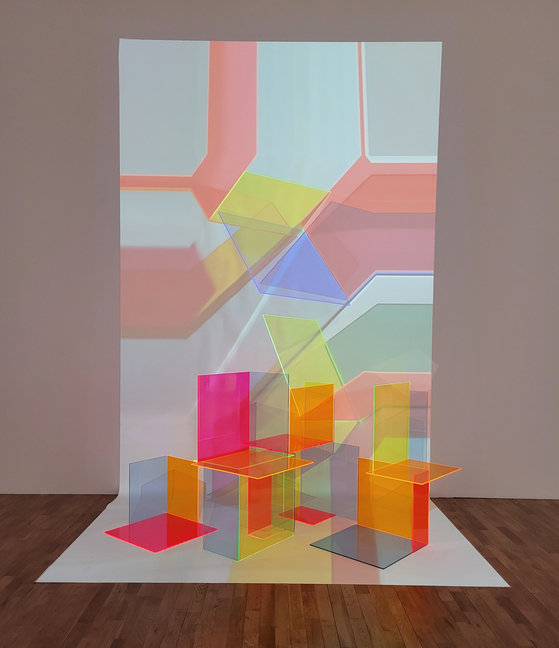 Amid the increasing complaints worldwide that there are too many art biennales and that they are not distinguished from museum exhibitions except for their excessively large scales, the 2020 edition of the Busan Biennale presents an alternative form; it is not extensive but rather compact and makes excellent use of literature to connect visual art, music, the physical and psychological spaces of Busan and the port city's residents and visitors.

"Eight Korean and three foreign fiction writers — from Denmark, Columbia and the U.S.A. — all representing different generations, genres and styles of writing, were invited to visit Busan in late 2019," wrote the biennale's artistic director Jacob Fabricius. "... the authors were commissioned to write short stories or poems from, to or about a city like Busan... The short stories and poems were given to 67 visual artists and 11 musicians who were asked to respond to one story by making and producing a new artwork or selecting an already existing work that relates to the story."

The 10 short stories and five poems by the invited authors, including the famous Bae Suah and Pyun Hye-young, range from a psychological drama to fantasy. They are now on the Busan Biennale website in the format of a free audiobook, both in English and Korean, recorded by Busan residents selected through an open call.

Thanks to the power of storytelling in these literary works, visitors to the biennale can approach contemporary art works, which are not yet very familiar to the public, with ease.

Some already existing works are viewed in new contexts and with renewed interest such as in the cases of Bae Jimin's panoramic landscapes of Busan in traditional black ink in relation to Mark von Schlegell's comedy-thriller-fantasy set in the city "Busan en Rose"; and László Moholy-Nagy's and Barbara Kasten's photographs in relation to Amalie Smith's allegorical play script about the history of electricity "Electricity Speaks." They are on view at the Museum of Contemporary Art Busan, one of the three venues of the biennale.

In addition, a lot of works have been newly created for this biennale. Among them is Bianca Bondy's "The Antechamber," a poetic installation of a bedroom covered with white salt, which was inspired by Kim Hyesoon's poem "Tundra Swan," which is also in the museum. Among the works on view in the Old Town of Busan, the second venue, is Francesc Ruiz's "A Room of One's Own Lily Indie Press" created in relation to Bak Solmay's short story "Daily Walking Rehearsals." The "lily" refers to subculture stories and comics about lesbian love. Ruiz's work is a tiny bookstore full of comics about the lesbian movement.

The other venue is Yeongdo Harbor near the Old Town, which has recently been emerging as a new hip place of Busan. The biennale runs through Nov. 8.

An Image from Bill Viola’s video work ’The Deluge.“ [BUSAN MUSEUM OF ART] 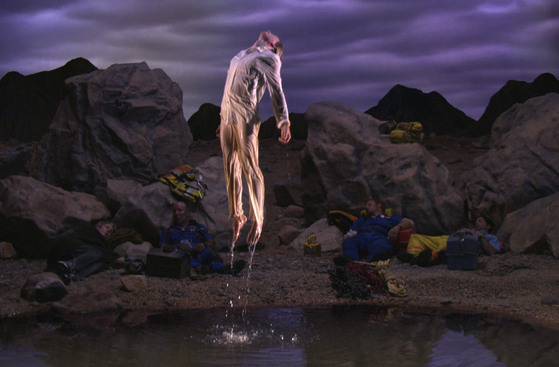 The Busan Museum of Art is 50 minutes away by subway from Jungang Station in the Old Town. In the museum runs the exhibition "Bill Viola: Encounter" as the second edition of the annual "Lee Ufan and His Friends" program until April 4.

"We designed this project to introduce foreign contemporary art masters that share some historical art contexts or philosophy with Lee Ufan, for whom we have a permanent exhibition space," explained Cheong Jong-hyo, chief curator of the museum. Lee is a renowned artist who led the "Mono-ha" movement in the late 20th century with other Korean and Japanese artists, exploring encounters between natural and industrial materials.

"Lee gave us a list of the artists whom he hopes to be invited to the program," Cheong continued. "Among them, British sculptor Antony Gormley joined the program first, holding a solo show last year."

"As for Bill Viola, he and Lee share the common point of questioning human condition in nature based on Eastern philosophy such as Zen Buddhism," said Ki Hey-kyung, head of the museum.

Viola, 69, has continuously explored time, the human life cycle and emotions in his video works, while often slowing or reversing time in the videos to show "many things we disregard...things we cannot see."

His consistent interest in these things are shown in the works on exhibit ranging from his early videos such as "Migration"(1976) and "Reflecting Pool" (1977-79)" to his latest video works including "Martyr Series" (2014). This exhibition gives the audience a rare chance to see Viola's important works that consist of multiple videos, such as "Five Angels for the Millennium" (2001), on large screens in a complete set.

One of the highlights is "Going Forth by Day" (2002) that consists of five videos on large screens — "Fire Birth", "The Path", "The Deluge", "The Voyage" and "First Light" which respectively symbolize existence, the cycle of life, unexpected disaster and suffering, death and resurrection. The videos together make the eternal circle of life and death or existence and non-existence, which can be associated with Buddhist philosophy. And some picturesque images in the videos are reminiscent of old Christian paintings. The work will likely be more impactful in this Covid-19 pandemic period. 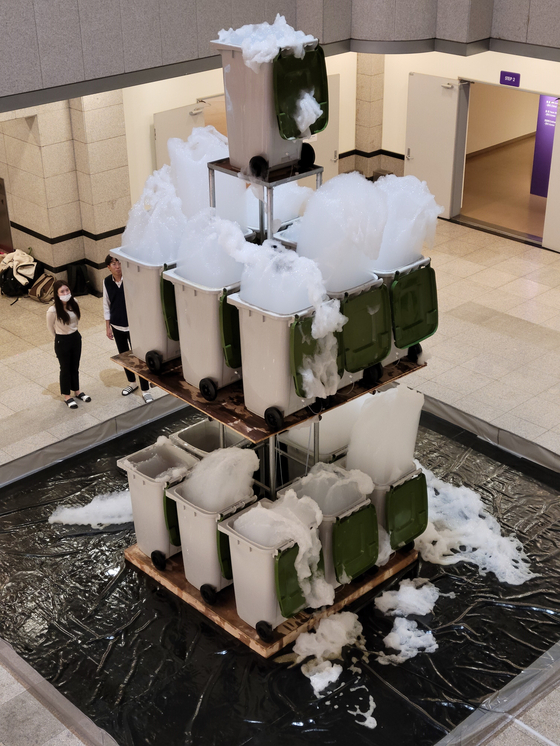 It takes about two-and-a-half hours to get to downtown Changwon from the Haeundae District of Busan by public transportation including a 50-minute intra-city bus ride. The venues for the 2020 Changwon Sculpture Biennale — Seongsan Art Hall and the nearby Yongji Park — are in the center of the city.

This year's edition, the fifth, has the theme "Non-Sculpture — Light or flexible." Artistic director Kim Sung-ho said he was inspired by American art historian Rosalind E. Krauss's famous 1979 essay "Sculpture in the Expanded Field"; the Korean avant-garde artist Lee Seung-taek's 1980 essay "The origin of my non-sculpture"; and "the aesthetic of non-materialism in the East."

The special exhibitions of the biennale are in accordance with the theme, including a retrospective of Lee, who "wanted to make sculptures without forms," with his performances including the famous "Wind" series, in which Lee makes wind visual with a long, red cloth. However, in the main exhibitions, many of the artworks on view look too monumental with their large scales and their material presence, going exactly against the theme "Non-Sculpture — Light or flexible." In addition, they are too large for the relatively small spaces of Seongsan Art Hall, failing to give the "aesthetic of non-materialism in the East."

Still, many of the works will appeal to the general public, which will make the local government happy. It has been a trend among Korea's local governments over the last decade to set up their own biennales to appeal to residents.

The bienale ends on Sunday. 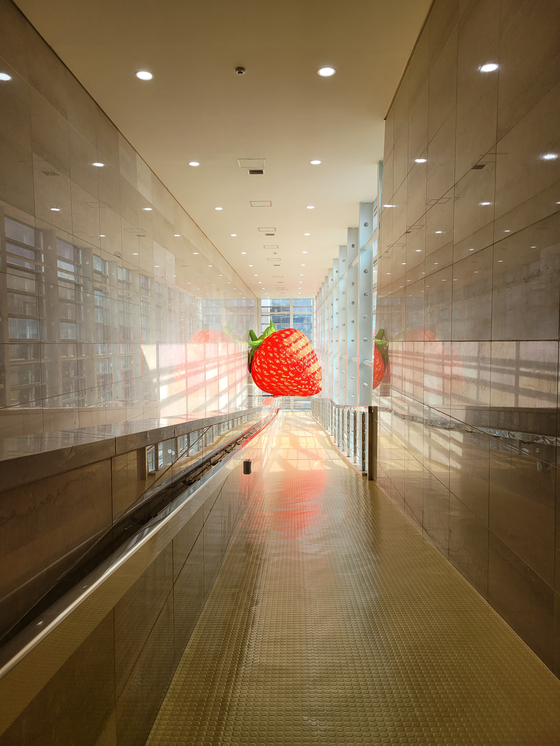 The Gyeongnam Art Museum, run by the South Gyeongsang provincial government, is a 20-minute walk from Seongsan Art Hall. Now, in front of the museum are huge fruits and a "Breathing" giant lotus flower with its petals moving in a respiratory manner. They are inflatable sculptures by Choi Jeong-hwa, one of Korea's most famous artists, as part of his new solo show.

The exhibition titled "Sarori Saroriratta (ancient Korean words that mean 'I will live, live')" started last week and runs through Feb. 14. The inflatable sculptures including a giant strawberry hanging on the museum corridor were previously installed in various parts of Changwon and the neighboring cities as part of the artist's "Fruit Travel" public art project to cheer up people tired of the Covid-19 pandemic.

Choi is well known for creating works with daily objects he finds in old-fashioned markets, especially the markets near his exhibition venues, or those which were donated by the residents in the regions, and the various old things that he collected ranging from precious antiques to waste such as used sea buoys. By combining them in inventive and unexpected ways, he mixes the objects' socioeconomic contexts with the personal and emotional histories of the objects' former possessors or the artist himself.

"It was the hardest exhibition I have ever made," Choi said. "I was overwhelmed by the scale of fruit and fish markets in this city and the ways ajumma [middle-aged women] there display the things. Although I always said I learn from ajumma in markets, it was a new shock."

The works on view include his new works that he created with objects from the Masan Fruits and Vegetables Market and other old markets in Changwon and the works he presented in his 2018-19 solo show "Blooming Matrix" at the National Museum of Modern and Contemporary Art (MMCA) Seoul, which was acclaimed by both art critics and the general public.