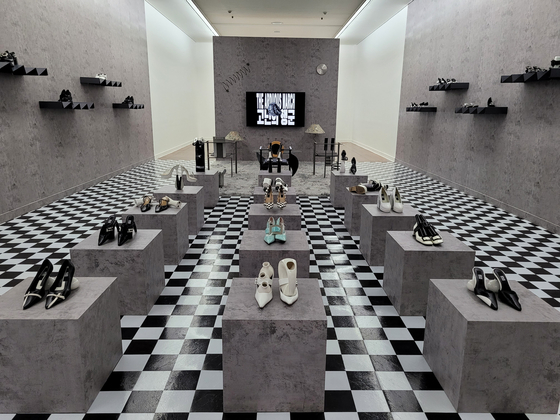 
On the second floor of the Seoul Museum of Art (SeMA) in central Seoul is a “boutique” for fictional shoe brand “PROTO NATION.” It is a new work by German artist Henrike Naumann for the ongoing Seoul Mediacity Biennale.

At a glance, the black and white space in minimalist style with pumps and boots on display stands looks like a real shoe shop. But a closer look reveals that many of the shoes are difficult to put on, as one pair of pumps has ceramic salt and pepper shakers as its heels and another pair is tied together with an oversized belt.

The pieces might remind art lovers of early Surrealist works that created the uncanny through unexpected combinations of objects. But, unlike those works, “PROTO NATION” has sociopolitical connotations as suggested by a video in the “boutique.” The video, in the stereotypical format of fashion ads, shows images of the North Korean elite’s fashion along with text such as “ARDUOUS MARCH,” “ETHNIC NATIONALISM” and “KOREAN WAVE.”

The Arduous March refers to a famine in North Korea in the 1990s, while ethnic nationalism is the ideology behind both the North Korean regime and many South Korean politicians of the current administration who argue Korean reunification is the most sacred goal of Korean people. The “shoes” made by joining disparate materials could be “a visualization of the meeting, or forced unification, of incongruous partners,” the biennial guide says.

Therefore, “PROTO NATION” might reflect the mind of younger South Koreans who are skeptical and worried about potential reunification of the two Koreas because of the wide gaps between them. But at the same time, the work might suggest the possibility of unexpected and strange beauty that could be produced by reunification. 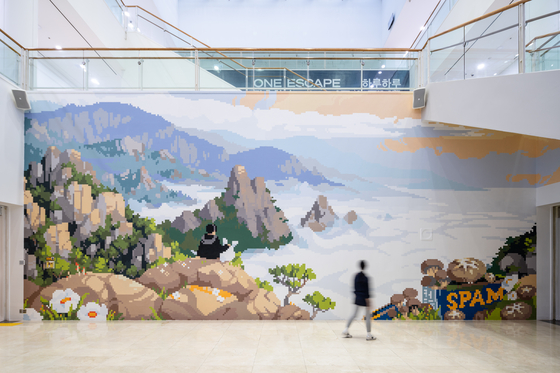 
Like “PROTO NATION,” many of the 58 works presented by 41 international artists in the 2021 edition of the Mediacity Biennale deal with sociopolitical issues through the languages and different forms of popular culture.

Under the theme “One Escape at a Time,” this biennial tactically uses escapism inherent in popular culture such as movies, TV shows, ad campaigns and K-pop to tackle urgent questions related to racism, gender, class, sexuality and migration among others, according to Yung Ma, the first-ever foreign artistic director of the biennial hosted by SeMA.

One of the virtues of this year’s Mediacity Biennale is humor, which is even suggested by the title “One Escape at a Time” inspired by the American sitcom “One Day at a Time”(2017-20). Many of the works on view deal with serious sociopolitical issues in depth, while maintaining a sense of humor. 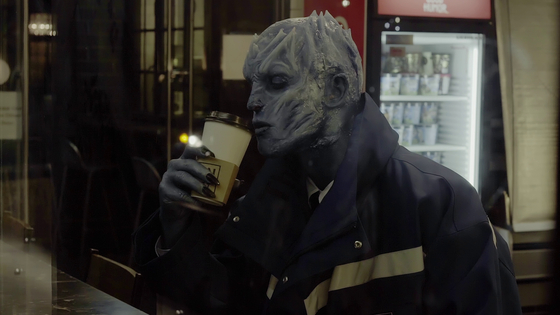 A scene from ″A Good Crisis″ (2018) by the New York-based collective project DIS. [SEOUL MEDIACITY BIENNALE]


This is visible in the Aboriginal Australian artist and activist Richard Bell’s “Broken English”(2009) and other video works on view on the first floor, which deal with lingering colonial mindset and prevalence of racist stereotypes; and the New York-based collective DIS’s video works including “A Good Crisis”(2018) in which a villainous character of the medieval fantasy TV series “Game of Thrones”(2011-19) explains the collapse of the U.S. middle class after the 2007 subprime mortgage crisis.

When the Korea JoongAng Daily asked Ma in an interview last week whether he considered humor an important element for the biennial, the artistic director said, “To some extent, I was quite conscious about that. Often the exhibitions that touch upon such [sociopolitical] matters tend to be very serious and sometimes even depress the audience. I wanted to avoid that.” 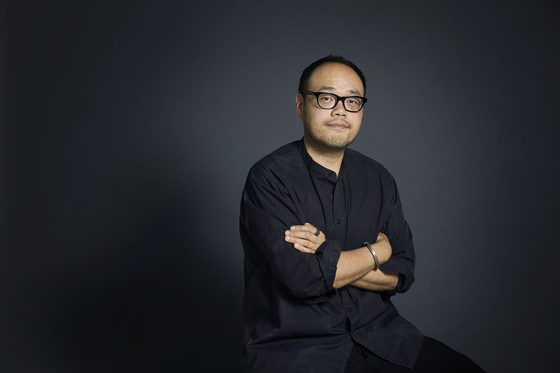 
Exhibited works encompass moving images, photography, paintings, sculptures, performances and installation works. Although the Seoul Mediacity Biennale was launched in 2000 to focus on art and technology, it has evolved over the past two decades to embrace both old and new media art to deal with urgent human questions. Ma said his focus is also the “content” of the art works rather than their medium.

After explaining the challenges he went through while preparing the biennial and installing works during the pandemic, Ma emphasized the importance of in-person exhibitions, “Maybe I’m old-fashioned but it is still very important to me to present physical experience for the audience.” 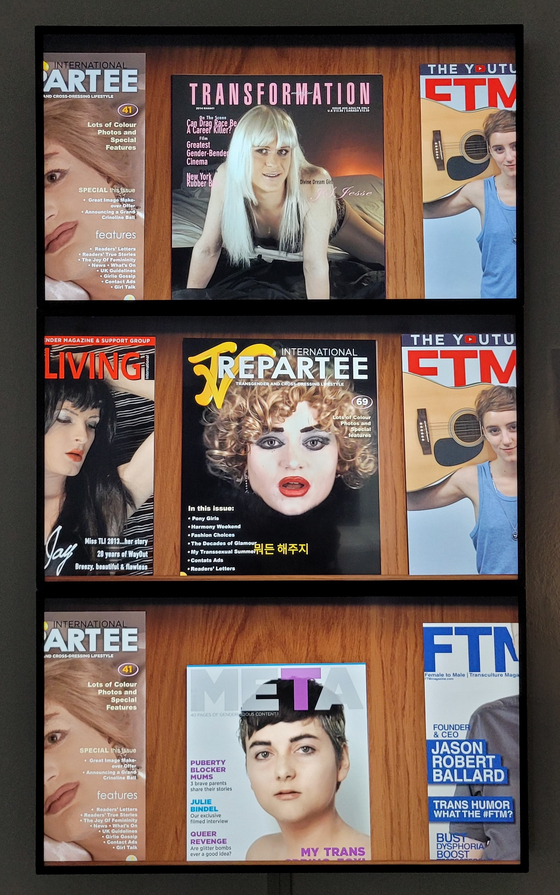 
Asked what is different between viewing a video work on computer or phone at home and viewing it at a museum, Ma said, “At home, you don’t experience the artist’s intention as much as in a museum. And, at home, you cannot experience a work’s connection with other works. Not only in terms of paying attention but also in terms of feeling the environment, an in-person exhibition is different from an online one. It’s not about just the act of looking but about the whole feeling and the whole experience of the environment.”

When asked to pick up a must-see work among those on exhibit, Ma said, “Every work is equally important so this is a question I never answer. However, to help your readers [understand the exhibition], I will pick Young-Hae Chang Heavy Industries' work. It has a very strong narrative. And it’s very tricky and funny but also very thought-provoking.”

The Seoul-based art collective, consisting of Korean artist Young-hae Chang and American poet Marc Voge, are presenting a new work “SAMSUNG MEANS REBIRTH” for this biennial. The seven-channel, seven-episode flash animation of texts with music tells the story of an executive of Korea’s biggest conglomerate Samsung, who dies of overwork and then reincarnates as a Samsung smartphone and then as a skin scrubber at a public bath frequented by Samsung employees and so on. The work satires not only working conditions and corporate culture in Korea but also global capitalism. 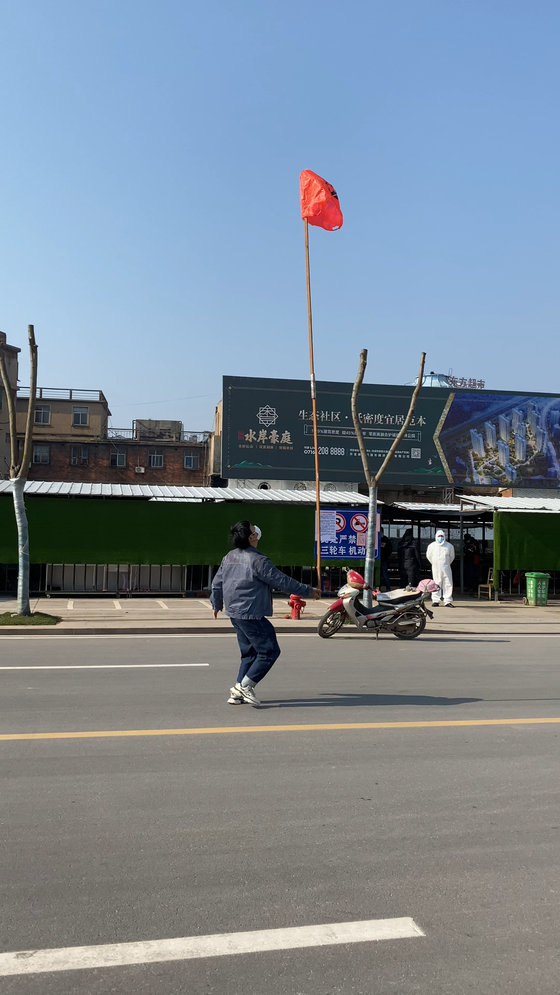 
Of course, the biennial includes artworks about the ongoing pandemic. Among them, Chinese artist Li Liao’s three-channel video “Unaware 2020” shows the artist’s performance in his hometown Wuhan, when the city was locked down in response to the outbreak of Covid-19. The performance shows humans' tendency to focus on useless things to forget the fear of disaster.

Philippine artist Eisa Jocson’s music video “Superwoman: Empire of Care,” which is also a new artwork for the biennial, tells how frontline medical and essential workers in the Philippines are heralded as national heroes during the pandemic but their job security is denied, through music and dance based on K-pop bands.

The 11th edition of the Seoul Mediacity Biennale is successfully dealing with the urgent questions of our time, in a relatively compact scale. It runs through Nov. 21. Admission is free.