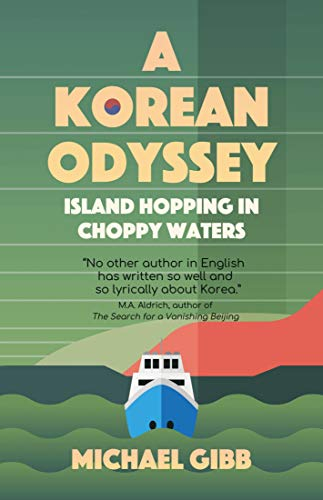 With Korea being a peninsula, finding a beach to enjoy the sand between your toes and feel the ocean breeze is not very difficult. Another advantage of Korea's landscape are the many islands dotted all along the coastline, easily accessible from the mainland in all directions with a simple ferry ride.

Michael Gibb, a former Seoul-based journalist, writes about the history and culture doused all over these islands in his new book “A Korean Odyssey,” released two weeks ago.

His book covers much more than just the jaw-dropping scenery and dives deep into historical events that have helped shape the islands and the lifestyles its residents have developed.

One such story covers scholar Jeong Yak-jeon (1758-1816) in the Joseon Dynasty (1392-1910), who was sent to be exiled on Heuksan Island where many scholars who showed interest in Catholicism were sent to be persecuted.

While Jeong was stuck on the island, he started keeping records of the marine life he witnessed and tasted in a book called Jasan Eobo. The book includes drawings of many different fish and detailed explanations of what they look and taste like alongside common ways to cook them.

The writer also followed the traces of another Joseon-era scholar — Kim Jeong-hui (1786-1856) who was imprisoned on Jeju Island to get a feel of the surroundings that inspired Kim to develop his own calligraphy and writing style.

Gibb also recorded the encounters of locals when he visited Bogil Island in South Jeolla, following in the footsteps of poet Yoon Seon-do (1587-1671), and even cited the translated versions of Yoon’s poems to help readers imagine the scenes from about half a century ago and see how different or similar they are from the views they can see now on the island.

“What I loved about the islands was their lack of pace, the quiet, the solitude, the seclusion,” the author told the Korea JoongAng Daily. “Islands are an escape and a refuge from urban landscapes, reliable Wi-Fi, texting and pollution, and they are rich in history and nature, too.”

The author, who hopes to one day buy a sailing boat and spend weeks traveling around and further exploring the islands, is currently in Hong Kong.

Life is not as simple as in a movie (KOR)