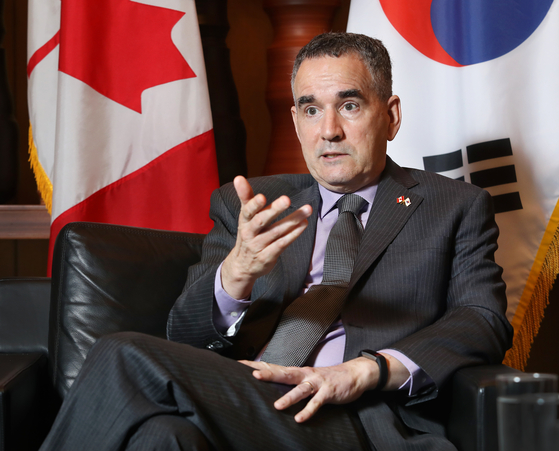 Canadian Ambassador to Korea Michael Danagher speaks with the Korea JoongAng Daily at the embassy in central Seoul on July 14. [PARK SANG-MOON]

Claude Charland, a 23-year-old lieutenant and commander of his platoon north of the Imjin River in Gyeonggi, was making breakfast one June morning of 1952 when they were paid a surprise visit.

“A group of Koreans from the same family, three generations, obviously farmers dressed in their black-and-white garments and with A-frames on their backs appeared on my platoon position,” Col. Charland said.

Twelve Koreans stood before Charland’s team — an old man in the lead, flanked by three men and three women in their mid-30s, three grown-up boys and two very young children. Except the young children, all wore wooden back carriers, called A-frames or jige in Korean, that were common tools used by farmers.

The shock of the meeting was evident among both parties.

“The surprise was more for us — how could they have reached our position without interference?” recalled Charland. “The only acceptable answer was that the grandfather knew where he was going and made his approach in very early morning hours. […] We stopped them and indicated, to their obvious dismay, that they could not proceed any further.”

Bloody battles during the war had already begun to take a toll on the soldiers, many of whom had watched close friends die before their eyes. But the encounter provided them with a reminder of their shared humanity.

“We waved them [over] to sit and share breakfast, hot chocolate for the younger boys,” Charland said.

The Koreans, unaware of what lay in store for them, ate in silence.

With the help of an interpreter, the Canadians would have found the Korean family’s request quite simple, had it not been made during wartime.

“We found out that they were the owners of a small hamlet, four huts in front of my position, and they wanted to get there,” Charland said. “There was danger in exposing the whole party to enemy artillery fire. But a listening patrol had been deployed at night, so we knew the huts were safe. We decided to escort them to their huts, limiting their stay to two hours.”

The family emerged from the huts with food supplies stacked upon their A-frames, but were told they could not return anymore.

“They had climbed back to the safety of our position very happy, exuberant for having recovered their food supplies,” Charland said. “It was a very touching experience to observe the gratitude in their eyes, having recovered what they had been missing for a long time.”

Charland was one of 26,791 Canadian soldiers, sailors and air force officers who risked their lives to protect Koreans during the peninsula’s three years of war. 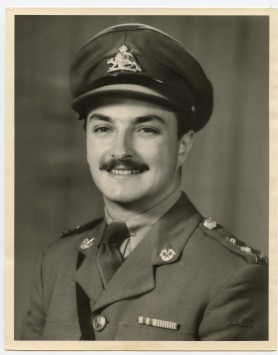 Claude Charland before leaving for Korea in November 1951. [CLAUDE CHARLAND]

The first Canadians to engage in the war were sailors on Three Royal Canadian Navy destroyers, dispatched in July 1950, just a month after North Koreans came charging across the 38th parallel, marking the beginning of the war. The 38th parallel had been established as the dividing line under a 1945 agreement between the United States and Soviet Union.

“Canada sent the troops following the decision of the UN Security Council,” explained Michael Danagher, ambassador of Canada to Korea. “The attack from the North was sudden and unexpected, and the UN had to respond quickly. Canada’s prime minister had the confidence of the House of Commons at the time, and even though Canada’s standing army had been largely demobilized after World War II, we had one regiment, the Princess Patricia’s Canadian Light Infantry, [to] become the first ground unit committed to Korea.”

The infantry served as part of the 27th Commonwealth Brigade. The 25th Canadian Infantry Brigade sailed for Korea in April 1951 and served in the First Division of the British Commonwealth. Members of Canada’s Royal Canadian Regiment and the 22nd Royal Regiment continued to arrive throughout the war.

“The Canadian actions were sometimes very hot, and some of it very close to trench war,” Danagher said. “In other times it was a war of patrols.”

Canada’s casualties during the Korean War — 516 deaths and 1,235 injured or missing — were the country’s third-highest after its losses during the two world wars. Some of the most difficult battles for Canadians were the Battle of Gapyeong, which took place in April 1951 in Gapyeong County, Gyeonggi, and the battle on Hill 355 at the front lines of the war and north of the Imjin River, in November 1951. 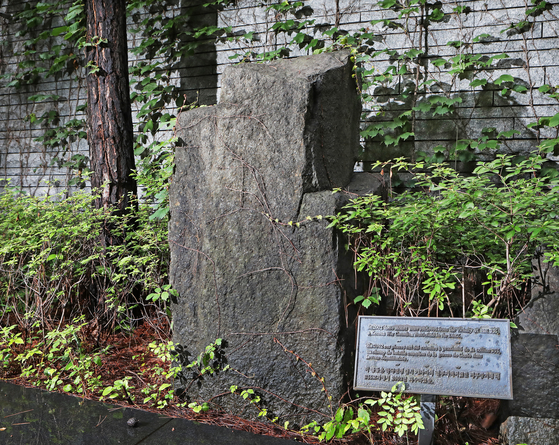 A stone retrieved from Hill 355, one of the locations of battles of the Korean War in which Canadians took part, at the Canadian Embassy in central Seoul. [PARK SANG-MOON]

Vincent Courtenay, who at the age of 18 fought in the Second Battle of the Hook in November 1952 near the Panmunjom area, said the battle remains vivid in his memory.

“After the U.S. marines had taken a hit and the British Black Watch Battalion were fighting to regain the hook, we were sent forward to counterattack on the night of Nov. 19,” Courtenay said. “There were less than 70 of us. Within an hour, there were fewer than 60.”

In the deluge of mortar and machine gun fire, Courtenay recalled seeing the bodies of British and Chinese soldiers everywhere.

“One Chinese soldier had been burned to death by a phosphorous grenade, and the flames were still flickering from his chest cavity,” he recalled.

There was no time to stop and take in what was happening around him.

“To reach the area we would defend, I had to crawl over the bodies of two of our soldiers whom I had spoken with just minutes earlier,” Courtenay said. “The next morning, both on the Hook and in no man’s land, I opened a can of cold combat rations. An enemy soldier I had killed in the night was only a few meters away from me. I had blood under my finger nails.”

Courtenay said none of them were the same after that. For decades he could not speak about the battle without breaking into tears. Even today, he said it was a memory he would rather not dwell on. 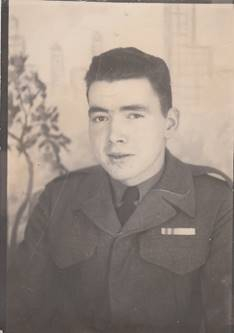 Vincent Courtenay in a photo taken in Japan in spring 1953 before returning to Canada. [VINCENT COURTENAY]

To help the soldiers take their minds off the gruesome details of battles, the Canadian military devised a respite in the form of a makeshift hockey game on the Imjin River, just a few miles from the Chinese forces.

“When the troops proceeded from South to North, a major obstacle was crossing the Imjin River, which eventually was situated some 15 miles behind the front lines,” Charland recalled. “We tried the river crossing with jeeps and light vehicles and concluded that the ice could withstand skating and possibly playing hockey.”

Canada’s Department of National Defense sent the soldiers on the ground hockey equipment in late December 1951. The soldiers suited up, including Charland.

“Since I had played a lot of hockey back home, I participated in that tournament, right wing forward player for my regimental team,” he said. “Of course, we were not sent to Korea to play hockey. Our job was fighting a war. [But] playing our national game so far away from home became a real morale booster, as much for the players as for the spectators during the reserve position of the Brigade. It brought us closer to home, was a catalyst between troops, created new hopes, and prepared us for the next challenges.” 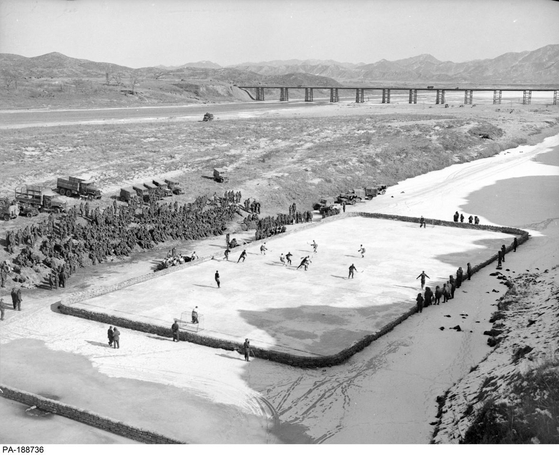 Though Charland didn’t know it at the time, 66 years later, he would not only have survived the war, but be back on the ice near the river. In the winter of 2018, the Canadian Embassy in Korea, Paju city government and the organizing committee of the PyeongChang Olympics teamed up to hold an event commemorating Canada’s participation in the war, as well as the hockey games.

“The site of the game in Paju gave us the opportunity to observe from a short distance the Imjin River, where we had played hockey,” Charland said. “The organizers had widely selected Jan. 19, 2018, to coincide with the Olympic Relay going through Paju and the hockey game site at Yulgok Wetland Park. I had the privilege and honor to be one of the four torch bearers for the occasion.” 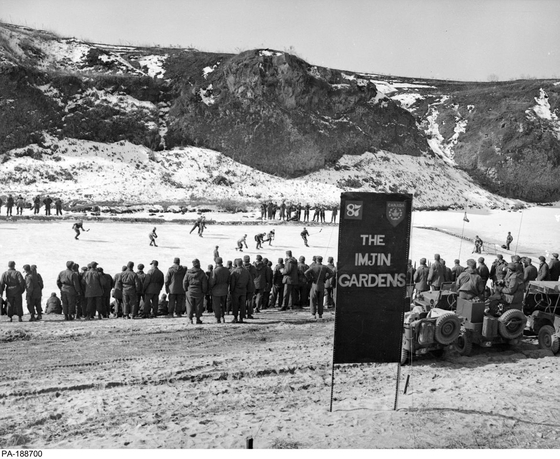 The Imjin Gardens, where hockey matches were held by Canadian soldiers on the Imjin River in Gyeonggi as a form of respite from the battles in March 1952. [GOVERNMENT OF CANADA]

Overshadowed by World War II and the Vietnam War, the Korean War has often been dubbed “the Forgotten War” abroad. But not to the veterans.

When Courtenay came to Korea in 1997, he visited the UN Memorial Cemetery in Busan.

“It was a heartbreaking experience — the grave markers were flat to the ground, all affixed to roughly poured concrete bases,” he said. “I found the sections where my friends are buried. The bronze tablets with their name embossed on them were icy cold to the touch. It was a tearful morning, and I resolved that in some way there must be some way, or something, to make people know who they were, what they looked like; that real, young men were buried there, and it was not just a field of carefully placed bronze tablets.”

After that, Courtenay moved to Korea to design and raise funds for a monument to put a face on the faceless veterans who gave their lives for Korea 50 years ago. The monument, an unarmed Canadian soldier holding a young Korean girl and guiding a Korean boy, designed by Courtenay and local sculptor Yoo Young-mun, was placed at the cemetery in 2001. A replica of the statue was also installed in Ottawa in 2003.

Given that Canadians only sent volunteer recruits to fight in the Korean War, Danagher called their contributions “highly personal.”

“The highest tribute we can have for them is to try to learn from their lives,” he added. “Twenty-seven thousand Canadians served in the war — so there are 27,000 stories.” 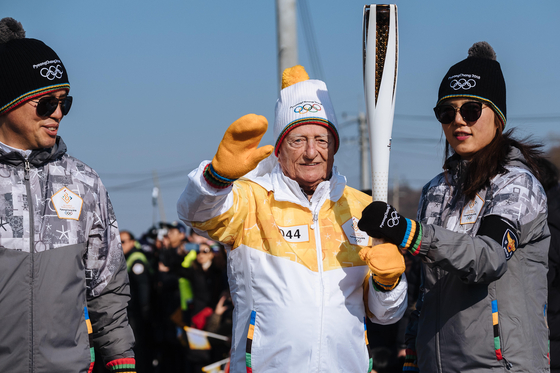 Charland when he revisited in 2018 carrying a torch in a relay for the PyeongChang Olympics in Gangwon. [CLAUDE CHARLAND] 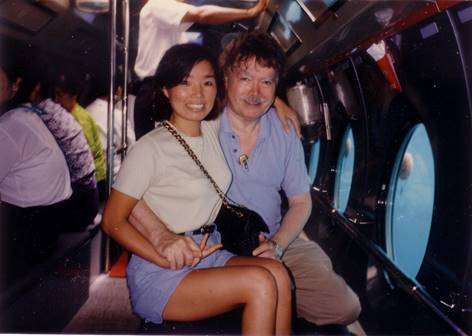 Courtenay with his wife Makye in Jeju Island in 1998. [VINCENT COURTENAY] 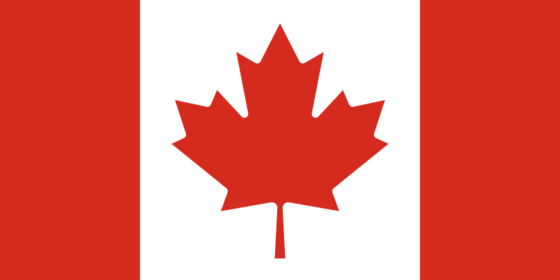 Canada answered the United Nations Security Council’s call to members of the UN to assist Korea to repel the armed attack and restore peace and security in the area, sending 26,791 military men and women.

The first to be committed on the ground was the Princess Patrician Light Infantry’s Second Battalion, which started arriving in December 1950. Members of the 25th Brigade, Royal Canadian Regiment and the Royal Regiment arrived subsequently. There were also 60 Canadian Nursing Sisters who tended to patients in the war, according to Veterans Affairs Canada.

A total of 516 Canadian soldiers died during the war, and another 1,235 were injured or went missing.