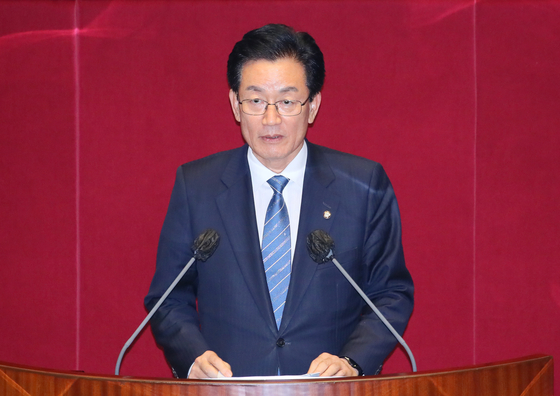 Rep. Jeong Jeong-soon of the Democratic Party speaks at the National Assembly on Thursday before lawmakers vote on a motion to allow his arrest. The motion was passed. [YONHAP]


For the first time in five years, the National Assembly voted Thursday to allow for the arrest of a sitting lawmaker, who is suspected of falsifying accounts that held campaign funds and illegally receiving donations.

The Assembly voted overwhelmingly to allow prosecutors to arrest Rep. Jeong Jeong-soon of the Democratic Party (DP), with 167 out of 186 lawmakers voting in favor of the motion. In Korea, sitting lawmakers are immune from arrest while the Assembly is in session, and cannot be detained without the legislature's approval.

Twelve lawmakers voted against the motion, three abstained and four votes were invalid.

The prosecution has sought to arrest Jeong on charges of rigging the account records of his campaign funds for the April general election, and is also suspected of receiving political funds from local politicians in Cheongju, North Chungcheong. The first-term lawmaker representing Cheongju, has refused eight requests from the prosecution to question him on the allegations.

Prosecutors subsequently applied for an arrest warrant, which the Cheongju District Court granted on Sept. 29.

Earlier in the morning, the main opposition People Power Party (PPP) decided against participating in the vote.

"He is a DP lawmaker, so the DP must decide his fate," Rep. Joo Ho-young, floor leader of the PPP, said.

The DP currently has 174 lawmakers in the 300-member National Assembly.

Ahead of the vote, the DP leadership made clear that it wouldn't use its majority to protect one of its own. The DP leaders had earlier pressured Jeong to cooperate with the prosecution.

The last time the legislature voted to strip a lawmaker's immunity from arrest was in 2015, when the Assembly approved the arrest of Rep. Park Ki-choon of the New Politics Alliance for Democracy, the predecessor to the DP, for political funding law violation.

In his letters to DP lawmakers, Jeong has said the prosecutors forced him to submit to an impossible schedule of questioning while the legislature was in session. He had offered polite explanations as to why he could not cooperate, but the prosecution instead sought a warrant to arrest him, he said.

Meanwhile, the National Assembly on Thursday postponed a scheduled audit of the Blue House, as top officials to be grilled refused to attend the session.

The audit was scheduled to take place throughout Thursday, but seven top presidential aides, including National Security Office Director Suh Hoon, informed the National Assembly on Wednesday night that they would not show up.

After the PPP criticized the Blue House's abrupt notice, the DP and the PPP agreed on Thursday to reschedule the audit to next Wednesday.

Put the legislature back on track