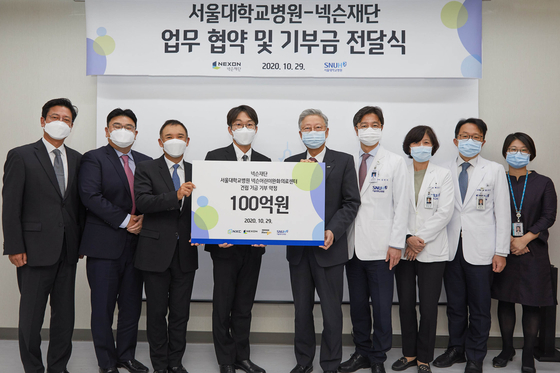 The donation will be used to purchase the land needed to build the medical center. SNUH will also receive 2.5 billion won from the government and will take charge of the facility’s actual operations.

The four-story medical facility aims to open in 2022 in Jongno District, central Seoul. Nexon and SNUH got together and signed an agreement for the project on Thursday.

The care center will offer short-term support for young patients that require around-the-clock medical care, such as those depending on artificial ventilators or feeding tubes. Patients can stay at the hospital for a maximum of seven consecutive days at once, and 14 days a year.

According to Nexon, about 130,000 children a year are in need of palliative care. Their primary caretakers are family members, mostly mothers. According to a study by SNUH, these caretakers spend an average 14.8 hours per day directly caring for and monitoring their children.


Despite such conditions, Korea is short of palliative care centers.

Family caretakers for 79 percent of young patients that need such care said they have no support. That creates issues for caretakers regarding their health, jobs and for other family members, like other siblings, who are also in need of parental care.

A 2019 report by the Ministry of Health and Welfare regarding home health care states that 82.9 percent of caretakers of young patients have not taken a break longer than three days in the last year due to a lack of appropriate facilities and people to assist them. For the breaks they do take, the report stated that they only took 1.5 hours per day, attending to their patients for more than 15 hours on average every day.

Since 2018, seven medical institutions have run small palliative care units with government funds. Once completed, Nexon and SNUH’s care center will be the first stand-alone facility dedicated to palliative care for children.

Pediatric health care has been an area that Nexon has invested in via its corporate social responsibility (CSR) initiatives. Most recently, in February 2019, Nexon donated 10 billion won for a pediatric rehabilitation hospital in Daejeon, slated for completion in 2022.

[WORD_ON_THE_WEB] 'They’ll realize the truth when taxi fares go up'