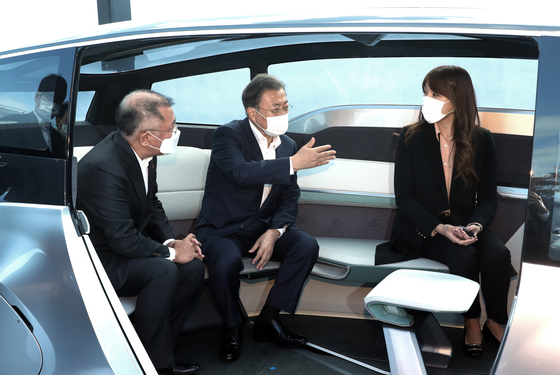 
President Moon Jae-in visited Hyundai Motor’s Ulsan factory Friday morning to familiarize himself with the manufacturing process of future vehicles, including hydrogen and autonomous cars, and to encourage workers.

It was Moon’s seventh visit to the business site that is in line with the administration’s New Deal program, aimed at achieving net-zero emissions and generating new jobs.

Moon’s visits started in June with a trip to Douzone Bizon, which develops and markets computer software.

On Friday morning, the president inspected the production line for Hyundai Motor’s Nexo hydrogen vehicle model. He examined the Neptune fuel-cell electric commercial truck and the E-GMP EV-dedicated platform with Hyundai Motor Group Chairman Euisun Chung and ministers at the Ulsan factory, which manufactured 38 percent of all automobiles made in Korea last year.

The government “will speed up on distributing future cars by setting the year of 2022 as the first year to commercialize them,” said Moon during the visit. “By 2025, [the government] plan to invest more than 20 trillion won ($17.6 billion) in green mobility, like electric cars and hydrogen vehicles.”

“Future cars are completely changing the paradigm of the automobile industry. The value of electric car manufacturer Tesla has surpassed that of global automobile manufacturers to become number one.” Moon added, “The government is progressing forward to bring [Korea’s] competitiveness in future cars to number one by 2030. The next five years will be the golden years to lead that future car market.”

Starting next year, all the new cars purchased by public institutions will be hydrogen or electric cars. Existing vehicles will be replaced by the environmentally-friendly automobiles.

Moon also emphasized the need to develop technologies that could drive the autonomous vehicle era.

“By 2027, [Korea] will commercialize Level 4 autonomous cars for the first time in the world,” Moon said, adding the government will help 1,000 auto parts companies transform into making parts for future cars by 2030.

Level 4 vehicles can operate in self-driving mode under limited conditions.

“The automobile industry is a backbone for growth and job creation, accounting for 12 percent of manufacturing industry’s exports and responsible for 470,000 jobs. By 2025, 460,000 electric cars and 70,000 hydrogen vehicles will be exported, and jobs related to their parts and materials will be expanded through the exports,” Moon added.