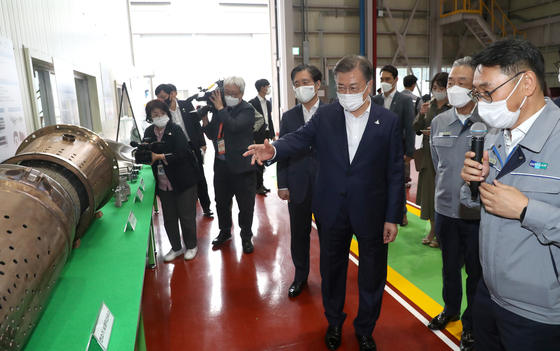 
The government plans to invest a total of 3.2 trillion won ($2.7 billion) in developing smart green industrial complexes by 2025.

The complexes are expected to create 33,000 jobs while raising renewable energy production from the current 0.6 percent to 10 percent and improving energy efficiency by 16 percent.

The plan was announced during President Moon Jae-in’s visit to Changwon industrial complex in South Gyeongsang on Thursday. The trip was his fourth related to the Korean New Deal, starting with a visit to an artificial intelligence company in Chuncheon in Gangwon on June 18.

The government since 2018 has designated seven smart industrial complexes.

Changwon and Banwol were the first to be selected in February 2019. Changwon industrial complex, known for manufacturing machinery, will now specialize in developing smart machinery and robotics.

Moon visited the industry complex in South Gyeongsang as it is also the first city to introduce a hydrogen-fueled public bus, also part of the the government’s push for more green energy projects.

The government said upgrading facilities to a smart green industrial complex will contribute to innovation in the manufacturing industry.

The administration plans to increase the ratio of smart factories from the current 5 percent of all factories in the country to 20 percent by 2025. Additionally, innovative data centers will be set up that collect data from factories and reuse it as needed.

A joint control system including logistics platforms and management of chemical and toxic material that would not only maximize logistics flows but also contribute in preventing accidents is also planned.

The industrial complexes will expand adoption of green energy, including setting up renewable energy power plants like hydrogen power generators, while plants will also have solar panels installed on the roofs.

Factories within the complexes will install factory energy management systems while maximizing the efficiency of energy usage through smart energy platforms, as well as installing equipment that will reduce pollutant but not hurt the production processes.