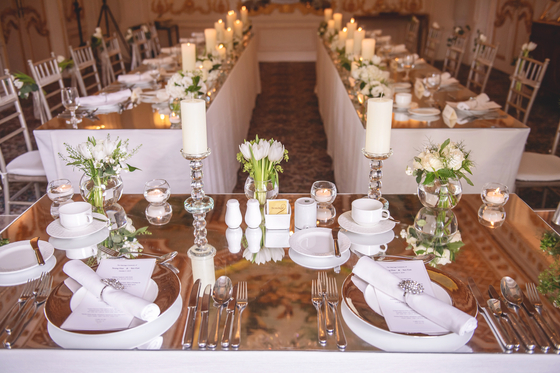 A 29-year-old man recently got married in a five-star hotel wedding hall. Because of the government’s social distancing guidelines, he couldn’t invite more than 50 guests.

According to the man, he hadn’t ever thought of having a wedding ceremony at a hotel due to the cost. Then he realized it only costs about 5 million won ($4,400) to have a wedding in a hotel with about 40 guests—which is the same price as a wedding hall ceremony with the usual number of guests.

“I never thought about having a wedding ceremony at a hotel, but ever since I did it, I’ve been recommending it to others,” he said.

Koreans who are forced to cut back on ceremonies and overseas honeymoons due to the pandemic are splurging in other ways.

As small weddings—which host about 100 guests or fewer—become popular among Koreans, luxury hotels have been enjoying strong demand for their wedding halls.

According to Statistics Korea, some 126,367 couples tied the knot between January and July. While the figure is the lowest number of marriages for any January-to-July period since the statistics agency started compiling data in 1981, the number of marriages held at five-star hotels has increased dramatically.

Lotte Hotel Seoul said the number of weddings it held in its wedding hall jumped 20 percent between January to September compared to the same period a year earlier. The number of small weddings spiked more than 100 percent.

More than half of the planned ceremonies for the second half of the year are small weddings, according to the hotel.

The Westin Chosun Seoul reported a 53 percent increase in micro weddings this year-on-year.

Hotels are scrambling to come up with additional services and events to attract more customers.

Lotte Hotel Seoul allows guests to see the ceremonies on its YouTube channel. The hotel’s general manager and head chef writes a congratulatory letter to the new couples and their families.

“We have been maintaining a close relationship with people who got married in our wedding hall by offering them special services for their anniversary or their children’s first birthday party,” Cho Jong-sik, the general manager of Lotte Hotel Seoul, said. “As customers for small weddings make reservations two or three months in advance, our reservation rate is likely to increase further.”