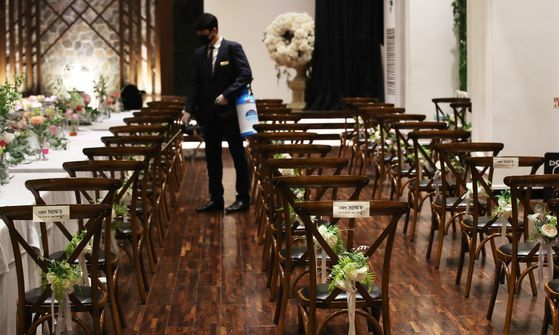 An employee disinfects a wedding hall in Suwon, Gyeonggi, on June 7. [YONHAP]


A 30-year-old soon-to-be groom surnamed Choi has watched helplessly as his wedding plans come crashing down around him amid fears of a second wave of Covid-19 in Korea.

Choi, who was planning to get married on Aug. 29, was handing out invitations to his friends just last week, before the government restricted large-scale gatherings on Tuesday. Indoor events involving 50 people or more and outdoor events involving 100 people or more are effectively banned for at least two weeks, until Aug. 30. Private events like weddings, funerals and birthday parties fall under the restrictions.

Restrictions, first introduced as recommendations on Sunday and then enforced on Tuesday, cover Seoul, Gyeonggi and Incheon, where the government has raised the social distancing level to two on the three-tier system. Other local governments around the country have also introduced their own preventative measures.

“In the morning, [the ban on gatherings] was just a recommendation, but it suddenly turned compulsory in the afternoon,” Choi said on Tuesday. "The government restriction on gatherings involving 50 people or more is no different from telling me not to have a wedding."

According to Choi, the wedding hall in Gangnam District, southern Seoul, where he and his fiancée have made a reservation, has not been answering his calls.

Soon-to-be married couples are facing a similar dilemma to Choi, with no specific rules or guidelines in place determining the refund policy that wedding venues have to offer. In the worst case, the couples might lose tens of millions of won without even having a wedding.

“The government should at least come up with accurate guidelines regarding refund policies for wedding companies,” said Choi.

The Ministry of Health and Welfare said Tuesday they are looking for a way that can prevent damages caused by the measure.

“Damages are inevitable at this moment when the government was rushed to come up with tighter measures [amid concerns over Covid-19],” said Sohn Young-rae, a health official from Ministry of Health and Welfare, on Tuesday. “We plan to allow wedding ceremonies if they can be held in a separate place that prevents people from moving to other places or being in contact with each other. However, if they participate in online ceremonies in a separate place but then gather to take pictures together, that’s a violation of the rules.”

Sohn added that the ministry will inspect gatherings such as wedding ceremonies or funerals by checking how many people participate.

“At this moment, having a gathering involving 50 people or more is dangerous for [event hosts] as well,” Sohn said. “We ask for your understanding that we have no other choice but to ask for the public’s cooperation at this time.”