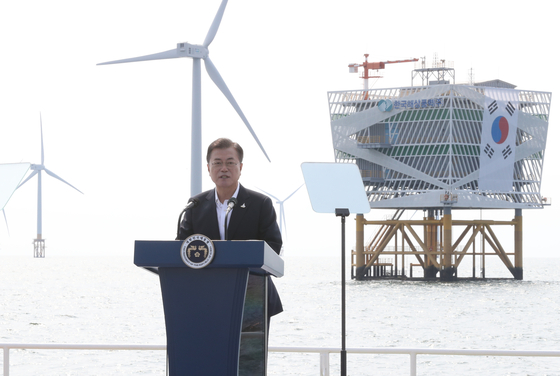 President Moon Jae-in makes a speech with the floating wind farm as a backdrop during his visit to Buan County in North Jeolla in July, a few days after a major Green New Deal briefing was held at the Blue House. [YONHAP]


On July 14, President Moon Jae-in formally announced the Green New Deal and said that the program will help the country lead in the post-Covid-19 era.

“We are developing a 100-year blueprint for Korea,” Moon proclaimed. “From a carbon-dependent economy to low-carbon economy.”

The Green New Deal, he said, was to speed up the transition to an environment-friendly, low-carbon emission economy that the country has been preparing for more than a decade.

The government is aiming at attracting 73.4 trillion won ($64.7 billion) of private investment into its Green New Deal, which will cover 46 percent of the total 160 trillion won that is planned for the Korean New Deal, by 2025.

It expects 655,000 jobs to be created, which account for 34 percent of the 1.9 million jobs that the government projects will be created through the Korean New Deal.

“The Korean New Deal is a pre-emptive action against climate change,” Moon said. “Climate crisis is a desperate reality that we already face as it has been reaffirmed by the coronavirus pandemic."

The plan came as Korea is facing its worst economic crisis in more than a decade and just three months after the idea was first mentioned by President Moon.

Since the plan was rolled out, companies have been announcing their own contributions to expanding the Green New Deal.

Korea Electric Power (Kepco), the country’s sole energy distributor, for more than a decade has been expanding its contribution to lowering carbon emissions and developing renewable energy.

Under the current law, which was revised in 2001, Kepco is banned from directly generating power. The goal is to prevent the state-owned company from monopolizing the power market. But it is still able to develop technologies related to climate change or renewable energy or invest into companies or projects doing so.


Kepco in January announced that it has developed a “next generation” chemical-looping combustion technology that removes pollutants. It succeeded in testing it on a 500-kilowatt engine, the largest test ever of pollutant-removal technology.

In May, Kepco announced a catalytic filter system that simultaneously reduces fine dust and nitrogen dioxide from 1-megawatt generators. The system was installed on a diesel-powered plant on Yeonpyeong Island.

The technology was developed jointly with Hyundai Material and Heesung Catalyst. Kepco said the system reduces the emission of fine dust and nitrogen oxide by 90 percent.

The catalytic filter has reduced installation costs by 30 percent.

Kepco estimates that they will generate roughly 500 billion won of economic value by 2026.

The company has been also working on investing in renewable energy in meeting the current administration’s 2030 target for renewable energy to account for 20 percent of all energy produced in the country by 2030.

As of 2019, renewable energy capacity was 16.1 gigawatts. The government’s goal is to increase this capacity to 63.8 gigawatt by 2030, which means about 4.3 gigawatts of renewable energy facilities must be installed every year for 10 years.

Under the government’s plan, solar energy will likely contribute the most, at 63 percent of renewable energy, while wind will follow at 34 percent.

Kepco cannot install its own renewable energy plants, but it has invested in related projects, including a 2.5 gigawatt offshore wind farm, since 2011. With the participation of six power companies, a wind farm with 60 megawatts of capacity was set up on the sea roughly 10 kilometers (6.2 miles) off Gochang County, North Jeolla, and has been in operation since January. The wind farm has Asia’s first 154-kilovolt offshore unmanned power substation.

Kepco also invested in a solar energy project in Milyang in South Gyeongsang that was completed in June 2019. 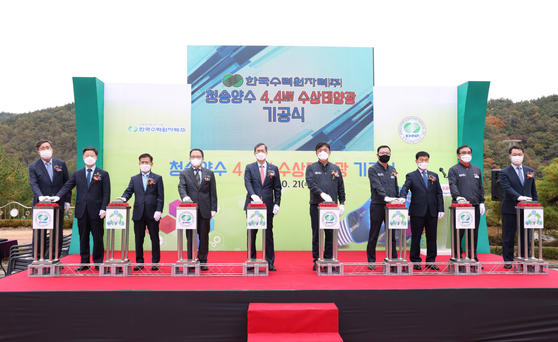 
Korea Hydro and Nuclear Power (KHNP), which generates 27 percent of the power in the country, is also taking steps to expand renewable energies.

The state-owned power company plans to invest a total of 20 trillion won in renewable power generators that will generate 8.4 gigawatts by 2030.

In its latest endeavor, KHNP last week announced that it has signed an agreement with the Andong, North Gyeongsang, government and Yeongnam University to install floating solar farms behind eight dams in North Gyeongsang.

The 1.36-trillion-won project will be generating 648 megawatts of electricity.

“Through this project, we will create a value of co-existence between local government, local residents and the public company,” said KHNP President Chung Jae-hoon.

The company on Oct. 21 announced the completion of a 19.2-megawatt wind farm near the pumped-storage power plant in Cheongsong county, North Gyeongang. The company invested roughly 54.1 billion won since construction started late 2018.

The 19.2-megawatt wind farm can generate annually 37,000 megawatt hours of electricity, which could supply power to 16,000 households.

The company also announced that it will start constructing a solar farm on the reservoir at the pump-storage plant in Cheongsong. Once completed in March next year, it will be able to generate 5,560 megawatt hours of energy annually, which could power roughly 2,800 households.

KHNP plans on investing 20 trillion won by 2030 to secure 7.6 gigawatts of renewable energy.

According to the Environment Ministry’s report released in September, Korea’s greenhouse gas emissions shrunk 3.4 percent in 2019 from 727.6 million tons to 702.8 million tons.

The drop was largely the result of the government cutting back on coal-power as well as a 6.3 percent increase in renewable energy produced, as a result of Korea’s measures against fine dust pollution.

Among the 700 million tons of greenhouse gas emitted in the country, the energy sector accounts for the majority, at 611 million tons, while industry emitted 53.6 million.

While the details this year by industry has not yet been released, in 2018, when greenhouse gas emissions increased 2.5 percent year-on-year, gas emissions from transportation, commercial businesses and households dropped, but they rose in manufacturing and construction.

The biggest jump was in the chemical industry, 13.1 percent, followed by steel, up 4.2 percent.

In line with the new policies, heavy industry is rolling its own plans.

The three will be collaborating on a smart street facility integrating Posco’s steel technology, KT’s internet of things (IoT) and Mystech’s production capabilities. This will include blocks that store rainwater and supply water when it is needed and protection pads that prevent trees from being uprooted and reduce carbon emissions.

“This project is meaningful with big companies and start-up companies joining forces in recovering the local green ecosystem,” said Kim Sang-kyun, Posco marketing director. “This will improve the image of steel as an environmentally friendly material.”

The steel maker has also been participating in major renewable energy projects, including the world’s largest offshore wind farm, in Hornsea, Britain.

Posco has supplied 30 percent of the steel used in the Hornsea 1 wind power generator in 2017 and Hornsea 2 last year.

It is also supplying to other major offshore wind farm projects in Europe, including Fryslan in the Netherlands.

Posco has been supplying steel to Taiwan’s major wind farm projects, including Formosa 2, Yunlin 1 and 2 and Greater Changhua, which is expected to help raise the ratio of renewable energy in Taiwan from 5 percent in 2018 to 20 percent by 2025.

The company said the purpose of the investment is to strengthen its environmentally friendly projects, which will also help solve social problems.

Hyundai Steel, the country’s second-largest steel manufacturer, is focusing on the hydrogen business as Hyundai Motor plays the central role in Korea’s pursuit of a “hydrogen economy."

On Oct. 12, the company released plans to expand the capacity of its hydrogen production plant.

Since 2016, the company has been producing hydrogen for hydrogen-fueled vehicles from Linz-Donawitz gas (LDG) released in the steel manufacturing process.

The company produces annually 35,000 tons of hydrogen gas from its steel mill. This could charge roughly 47,000 hydrogen-fueled vehicles.

It plans to increase that capacity to 372,000 tons, although it did not give a specific deadline.

Refiners, which are also major emitters of greenhouse gasses, are also unveiling their own environmentally friendly plans.

GS Caltex is one of the most aggressive heavy industry companies in rebranding itself as an environmentally friendly company.

According to the company, it installed an ESG management system, and it made roughly 500 billion won in environmentally friendly products in 2019, which account for 1.5 percent of the company’s total revenue.

It was able to recycle waste by 76 percent.

GS Caltex has replaced low sulfur fuel oil with liquefied natural gas at its refinery plant in Yeosu, South Jeolla, in April, and it was able to reduce carbon emissions by more than 19 percent.

Hyundai Oil last month announced its plan for carbon neutralization, where it would significantly reduce carbon emission by 70 percent of its current level by 2050.

The company last year emitted 6.78 million tons of carbon. Under its plan, 30 years later the refiner’s carbon emission will be reduced to 4.99 million.

The refiner is targeting the development of such technology by the second half of next year. This technology is expected to reduce the carbon emission by 540,000 tons a year. And by 2030 it expects the business will generate a minimum 100 billion won of operating profits.

By 2024, Hyundai Oil plans to swap three of its oil boilers into liquefied natural gas fueled boilers. By 2050, it wants all its power from renewables.

This will contribute to reducing 1.08 million tons of carbon emission.

S-Oil has taken a different route in contributing to the green revolution. It earlier this month announced that it was securing emission reductions by investing in start-ups in clean development mechanism projects.

The oil refiner announced that it is investing in Glory & Tech, a Korean company that is providing safe water solutions to Bangladesh.

The refiner said it has been taking action to contribute to the reduction of carbon emissions, including installing energy monitoring systems. As a result, it was able to reduce the carbon emission of its plant in Ulsan by 6 percent last year compared to 2018.

In 2018, it changed the fuel used at its Ulsan plant from Bunker-C to liquefied natural gas.

According to the Ministry of Trade, Industry and Energy, Korea’s exports related to renewable energy have been steadily rising, especially in solar.

There have been major successes in the last two years.

One of the noticeable achievements is Hanwha Solution’s market dominance in solar cells in the United States. The Korean company as of 2019 holds the lead in solar energy, with a market share of 25.2 percent for households and 13.3 percent for industrial use.

Other achievements include Shinsung E&G in April last year winning a contract with Sunpower to supplying solar cells that will generate 322 megawatts of power. That’s an amount that could power 100,000 households.

SolarPark Korea in May 2018 signed a five-year contract to supply 800-billion-won worth of high-efficiency modules to Solaria.

One of the opportunities that Korea is looking into is a project in Abu Dhabi to put solar panels on the roof of a theme park. Miral, a leisure and entertainment company, and Madar, a clean energy company, plans to install 16,000 solar cell modules that will cover a 36,000-square-meter (387,500-square-foot) area.


Green is the way to go

Green is now the global trend. Although U.S. withdrew from the Paris Agreement, which was signed in 2015, renewable energy facilities and the powers generated from such sources have been growing.

As of 2017, 25 percent of all power generated was renewable.

Starting next year, the EU, China and Japan will be taking their first steps towards carbon neutrality.

President Moon Jae-in last week vowed carbon neutrality by 2050. Under the plan, Korea will be reducing emissions around 180 million tons a year.

According to the World Bank, Korea currently ranks seventh in the world on carbon emissions.

“ESG will become the standard for evaluating companies,” said Kim Do-hyun, an analyst at Samsung Securities. “In the past, companies only had to make profits, but from now on they have to protect the environment as it is directly related to our lives and humanity.”

'Made in Korea' becomes a must as supply chains collapse