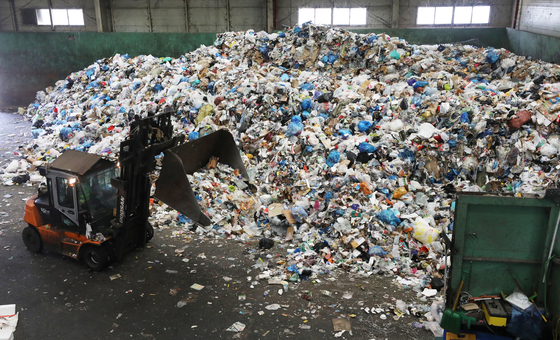 An employee of a waste-sorting firm separates the accumulated waste with an excavator at a recycling center inside a park in Songpa District, southern Seoul. [NEWS1]


Waste from packaging — plastic, vinyl and Styrofoam — is overwhelming the environment as delivery booms in the age of Covid-19.

It's known as "white pollution."

According to Statistics Korea on Tuesday, the cumulative turnover for online food delivery in the January-July period was 8.66 trillion won ($7.43 billion), a 73.6 percent on-year increase.

Household waste from delivered goods, such as plastic and vinyl, has been rapidly mounting as well. The Ministry of Environment announced that a daily average of 850 tons of plastic waste was generated in the first half of the year, a 16 percent on-year increase.

The recycling rate for plastic is low. A significant proportion of plastic waste is stained with food and other substances, and hence it is burnt and used as fuel. Estimates put the genuine recycling rate at under 10 percent.

“The recycling rate for plastic in Korea is around 10 percent, but the production rate of plastic has surpassed the recycling rate at a faster speed. Recycling is not enough for waste reduction,” said Hwang Sung-yeon, head of the biochemical research center at the Korea Research Institute of Chemical Technology (Krict).

“It is hard to impose strict regulations against the use of disposable items in the coronavirus era. The time has come to proactively consider alternative sources that biodegrade when buried in the ground.”

An alternative material discussed globally is biodegradable plastic, which belongs to the bioplastics group.

Bioplastics is divided into two groups: biodegradable plastic, which decomposes, and biobased plastic, which does not decompose but is made of natural ingredients, such as corn and sugarcane.

The thin vinyl that wraps Starbucks bananas is made with polylactic acid (PLA), which is biodegradable plastic manufactured in the United States. German chemical company BASF made agricultural vinyl that decomposes underground in three to four months. It is used in the farmlands of South Jeolla, Gangwon, North Chungcheong and Gyeonggi.

As the volume of parcel delivery is at an all-time high during the coronavirus pandemic, the waste from packaged goods is a major source of white pollution.

Some developed countries are actively developing plastic that 90 percent biodegrades on land or in the ocean within six months. Polyhydroxyalkanoates (PHA) is one example. According to the Ministry of Oceans and Fisheries, 80 percent of ocean waste worldwide is plastic, which includes vinyl, and microplastics have become a threat to humanity.

The Institute for International Trade predicts that the market for biodegradable plastic will grow 15.1 percent per year to $6.1 billion in 2023 from $3 billion in 2018. Due to the coronavirus pandemic, the growth curve is expected to become steeper.

Local companies that have already begun research into biodegradable plastic possess technology, but they cannot easily enter the market because of the Ministry of Environment’s policy that only recognizes industrial-type biodegradable plastic. The industrial-type biodegrades at 58 degrees Celsius (136 degrees Fahrenheit) and in an environment with specific compost and microorganisms. Even if firms want to develop plastic that decomposes in other natural surroundings, such as on farmland and in the ocean, currently there is no category for it.

The certification process by the Korea Environmental Industry & Technology Institute (Keiti) under the Ministry of Environment is also complex. Without a factory site dedicated to the manufacturing of biodegradable plastic, firms cannot apply for certification even if the product is developed at a research center.

“In countries like the United States, Germany and Japan, several private institutions certify biodegradable plastic based on components after a review of samples,” said a biotechnological industry expert who wished to remain anonymous. “In Korea, there are three to four times more documents that need to be submitted, and the process also takes almost twice as long.”

The Ministry of Trade, Industry and Energy has selected biodegradable plastic as one of the project areas for its Green New Deal, which is part of the Korean New Deal intended to speed economic recovery.

“A set of measures will be announced in October for white biotechnology, including biodegradable plastic and others,” said a spokesperson for the Energy Ministry. “A basic principle is ensuring that there are no obstacles hindering corporations from entering the market.”