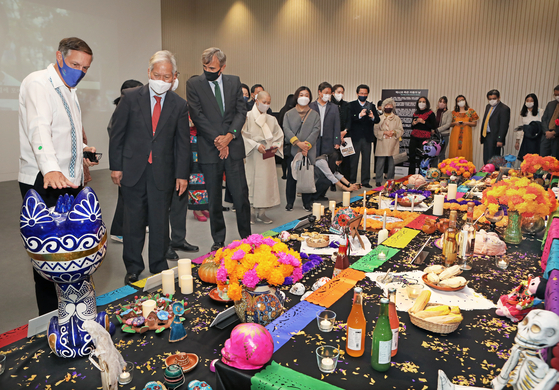 From left, Bruno Figueroa, ambassador of Mexico to Korea, Bae Ki-dong, director of the National Museum of Korea, Juan Ignacio Morro Villacian, ambassador of Spain to Korea and other guests view "Mexico's Day of the Dead Offering" exhibition at the museum in central Seoul on Oct. 30. [PARK SANG-MOON]

Open through the coming weekend at the National Museum of Korea is one of the largest-ever ofrendas, or offerings, in Korea to commemorate the Day of the Dead of Mexico.

“For Mexicans, the Day of the Dead, despite the solemnity that the title evokes, is actually a celebration of life,” he said. “It is an opportunity to meet again, to pay homage to those who are no longer with us and even to hold festivities.”

The Day of the Dead is celebrated for several days beginning Oct. 31, when the deceased children are remembered. On Nov. 1, the deceased adults are honored. Families set up the ofrendas to invite the souls to their homes.

Though each family can design their ofrendas as they wish, they always hold objects that the deceased relatives loved — it could be toys for the little ones, a favorite brand of alcoholic drink or dishes of comfort food — along with their photos.

Photos of the first Korean immigrants to Mexico’s Yucatan in 1905, and of distinguished Mexicans who passed away this year, including the writer Amparo Dávila, the Nobel-laureate scientist Mario Molina and the filmmaker Paul Leduc, have been placed on the altar at the museum. 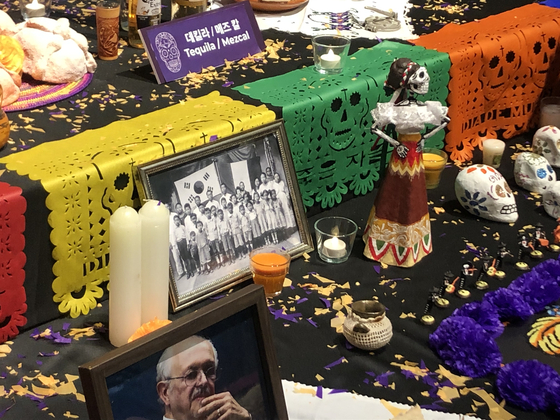 Photo of a group of Korean immigrants to Mexico in 1905, on the Day of the Dead offering exhibition at the National Museum of Korea. [ESTHER CHUNG]


“In homes, the altar has great similarities with the table for the Korean ritual of ‘jesa,’ on which candles, food and drinks are arranged in honor of a deceased person,” Figueroa said. “There is no strict codification in the Mexican case: each offering will be different, although there are common elements in all of them [which can include] the use of some dark colors, candles as well as religious images and symbols like the cross.”

The ambassador added that also included generally are skulls or papier-mâché which stand as representations of death; bread baked especially for the occasion, which can be in a human image or be a round bread with sugar decorations shaped to resemble bones; a glass of water for the souls to quench their thirst in their journeys home and hereafter; and marigold flowers, known as cempasúchil. 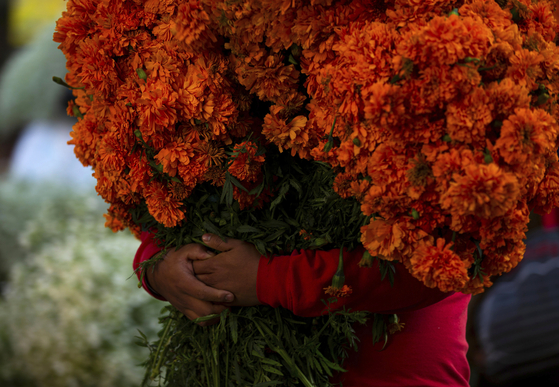 A young flower vendor holds a bouquet of marigolds, the iconic Day of the Dead flower for Mexicans that is known as cempasuchil, at the Jamaica Market, in Mexico City on Oct. 29, [AP/YONHAP]

“To remember that the arrival of souls is also a festival, in the offerings there are many colored flowers, and in particular the marigold flower which means in the Nahuatl language ‘one hundred flowers,’” Figueroa said.

The objects can also represent the four elements — earth, water, air and fire — following the beliefs from the Aztecs’ times.

“The papel picado shakes in the wind, representing the air,” said Veronica Gonzalez-Laporte, wife of Ambassador Figueroa. “The salt on the altar and the black fabric is linked to earth, the glass of water of course stands for water and the candles and the flowers represent the light, or the sun.”

Families also visit cemeteries at this time, to pray, sing and share the favorite food and drinks of their deceased families and friends. They also make rows and rows of petals of cempasúchil on the ground to guide their relatives' souls from the cemetery to their homes.

“The museum deemed it quite timely and appropriate to host an exhibition showing a tradition of Mexico to honor the dead, because we are at an unexpected time of honoring the victims of Covid-19 pandemic all around the world,” said Bae Ki-dong, director the museum, in his address at the opening ceremony. “I hope that the exhibition will be visited by many Koreans for them to learn more about the Mexican way of thinking and honoring their dead.”

Due to the Covid-19 pandemic, the museum is operating on a reservation-only system for the exhibition. Reservations can be made at the museum’s website.

Keeping to the day’s tradition of writing poems, which tend to poke fun about the living, Figueroa contributed the following poem, “2020, The year we lived dangerously,” for the Day of the Dead of 2020.

“I will spread Covid in two thousand and twenty,
Announced Death to sinful humanity,
And I will take you all to eternity.
People went crazy, succumbed to insanity;
Except the ambassadors, who kept their foolish dignity.
You cannot take us, they chanted full of vanity,
Because we have diplomatic immunity!”