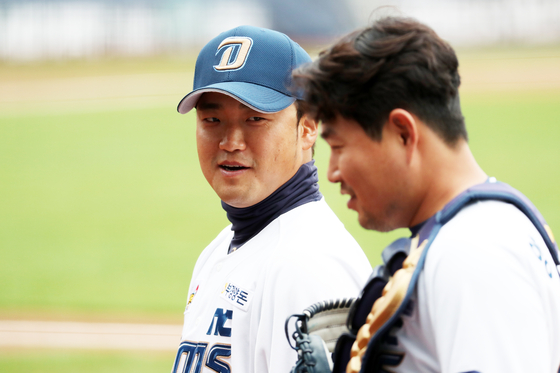 NC Dinos infielder Park Sok-min, left, and catcher Yang Eui-ji speak to each other ahead of their intrasquad game at Changwon NC Park on April 10. [YONHAP]


Having earned the regular season title for the first time in the club’s history, the NC Dinos have their sights set on winning the Korean Series as well this year.

Still, the Dinos were practically unstoppable in the 2020 season. They finished the regular season with 83 wins six ties and 55 losses, 4.5 games ahead of second ranked KT Wiz.

With the quick improvement of their young players, the team found the best balance both on offense and defense, generating confidence for the entire team.

Having joined the KBO in 2013, the Dinos are one of the league's younger teams, but have maintained a consistent presence in the postseason. Except for their first season and 2018, when they finished in seventh place and dead last at 10th, respectively, the Dinos managed to finish within the top five every other season.

This is only the second time that the Dinos have earned a shot at winning the Korean Series title, but questions linger as to whether the young players will be able to continue their strong performance on a bigger stage.

The majority of the players on the Dinos roster are still young, but with the addition of several veterans, the team believes that they can take home the championship.

The biggest difference is the addition of catcher Yang Eui-ji and infielder Park Sok-min, two veterans who have already experienced winning the Korean Series in their career. In December 2018, the Dinos signed a four-year, 12.5-billion-won ($11 million) contract with Yang, the highest free-agent contract for any catcher in the KBO.

After the Dinos finished the 2018 season dead last in the KBO, the addition of Yang boosted expectations for the team. In 2019, Yang helped stabilize the Dinos’ young bullpen throughout the season to lead them to a fifth-place finish. Despite losing the Wildcard Series, the club saw a big improvement in their pitching squad.

“Since Yang Eui-ji joined [the Dinos], our pitching and batting has changed completely,” Dinos manager Lee Dong-wook said. “Having a great player on the team feels like a strength.”

This year, Yang will make his appearance in the Korean Series as the Dinos’ captain.

Along with Yang, the Dinos’ infielder Park is another veteran that the young Dinos players can rely on. Before the Dinos signed Yang, Park was the club's priciest acquisition, signing a four-year, 9.6-billion-won contract prior to the 2016 season.

In his first season with the Dinos, Park earned his pay by hitting 32 home runs, but he has subsequently struggled in the remaining three years of his contract, which have also seen him sidelined by injuries.

Once his four-year contract ended in 2019, the Dinos re-signed with Park, but at a lower price. The two-year contract included an option for another year at 3.4 billion won. To redeem himself from his past three seasons of his struggle, he has worked harder than ever during this past offseason and in 2020.

Park finished the 2020 regular season with a 0.306 batting average and led the league in on-base percentage, at 0.436. In addition to his numbers this season, Park also brings the experience of having played in a Korean Series.

Before joining the Dinos, Park played for the Lions since 2004. The Lions won four straight Korean Series titles, from 2011 to 2014.

Park showed a strong performance in the postseason and was named the MVP during the KBO playoffs in 2016. Thanks to his performance, the Dinos defeated the LG Twins with a record of three wins and a loss to advance to the Korean Series.

The Korean Series is a best-of-seven series, with the first game scheduled to start on Nov. 17. As it is starting later than usual, all Korean Series games will be played indoors at the Gocheok Sky Dome in western Seoul.