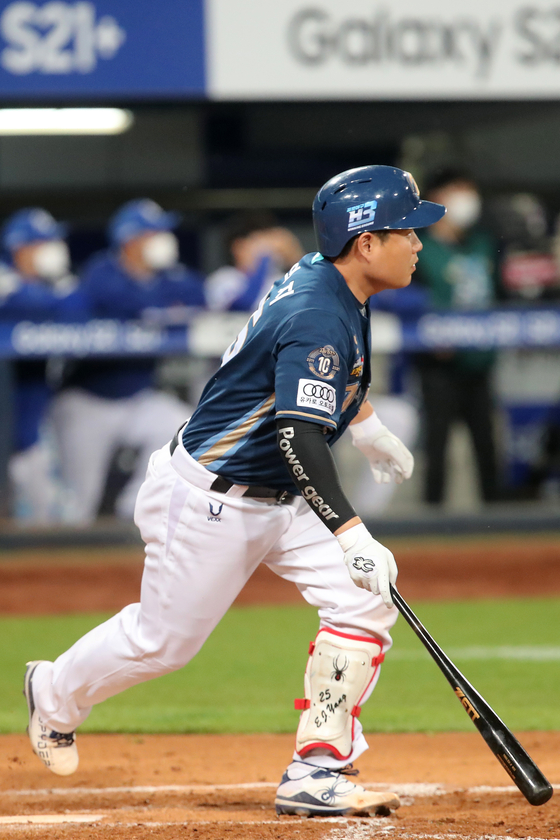 Yang Eui-ji of the NC Dinos hits a double in the seventh inning against the Samsung Lions to complete the cycle at Daegu Samsung Lions Park in Daegu on Thursday. Yang is the first catcher in KBO history to hit for the cycle. [NEWS1]


Yang Eui-ji of the NC Dinos became the first catcher in KBO history to hit for the cycle on Thursday as the Changwon club beat the top-ranked Samsung Lions 9-0.

Yang started things off the hard way at Daegu Samsung Lions Park in Daegu on Thursday night, hitting a stand-up triple off the fence at the top of the second inning, his first triple of the season. He followed it up with a single in the fourth inning before going deep in the fifth inning.

A double in the seventh completed Yang's cycle and added him to the history books as the 28th player in KBO history and first catcher to hit for the cycle.

Yang ended the game with three RBIs and two runs scored off four hits in five at bats. He currently ranks third in the KBO for RBIs at 23, three behind Kim Jae-hwan of the Doosan Bears on 26.

For the season, Yang has a 0.329 batting average with 23 RBIs and four home runs on 24 hits. Yang joined the Dinos in 2019 as a free agent after playing eleven years with the Bears. He led the Dinos to win both the pennant and championship titles last season.

Yang is the first person to hit for the cycle in the KBO in 2021 season. Last year the feat was managed twice, by Kim Hye-seong of the Kiwoom Heroes against the KT Wiz on May 30, and by Oh Yoon-suk of the Lotte Giants against the Hanwha Eagles on Oct. 4. Oh is the only person in the history of the league to have hit for the cycle with a grand slam.

NC makes some changes after difficult 2021