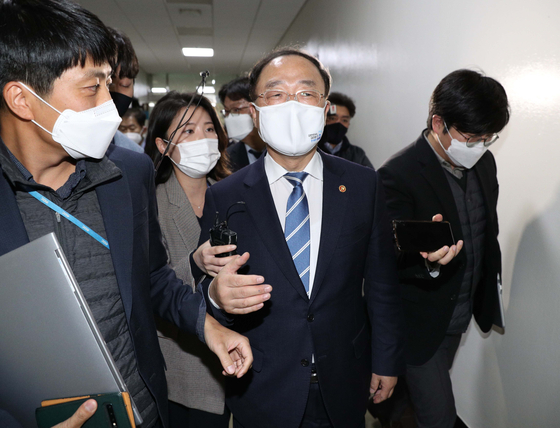 Finance Minister Hong Nam-ki is surrounded by reporters after exiting a meeting with lawmakers at the National Assembly on Nov. 3 in Seoul. [YONHAP]

The finance minister tendered his resignation on Tuesday after announcing that the government will accept the ruling Democratic Party’s demand not to impose taxes on investors owning more than 300 million won ($265,000) worth of a single stock.

“The government, the ruling party and the Blue House through a meeting decided to keep the level at 1 billion won, as uncertainties regarding the recent global situation and the economy have gone up,” Hong said.

“I believe someone had to take responsibility on the debate that lasted for two months,” Hong said. “And I am telling you that I have decided to take the responsibility, and in expressing my intention to resign also turned in my resignation.”

According to the Blue House, Hong expressed his intention to resign to President Moon after the cabinet meeting. The president rejected and reaffirmed his confidence in the finance minister.

The government earlier this year announced plans to tax profits made from stock investment.

Anyone who makes more than 20 million won a year would be hit with a tax from 2022. For major investors, the government was aiming at applying the maximum taxation starting April next year.

Those scheduled to be taxed were people that have 300 million won or more in a single stock. This was a drop from 1 billion won, the level applied from last year.

Korea currently does not tax capital gains on stock investments — other than those with more than 1 billion in a stock — and only taxes transactions.

The level defining major investors has been lowered in recent years. In 2017, it was lowered from 2.5 billion won in a stock investment to 1.5 billion won. Last year, it was further lowered to 1 billion won.

The government met strong public backlash, especially since many investors were rushing to the stock market after heavy restrictions were placed on property investment.

Faced with pressure from the public and the ruling party, the government came up with a compromise in which it would calculate the thresholds by individual holdings. The government had been planning to use family holdings to determine the amount.

The public was not appeased.

Despite the government’s stated goal, the price of housing continues to rise, while rents have been soaring and tensions between tenants and landlords heightening.

Even the finance minister had problems with his tenant that refused to move out earlier.