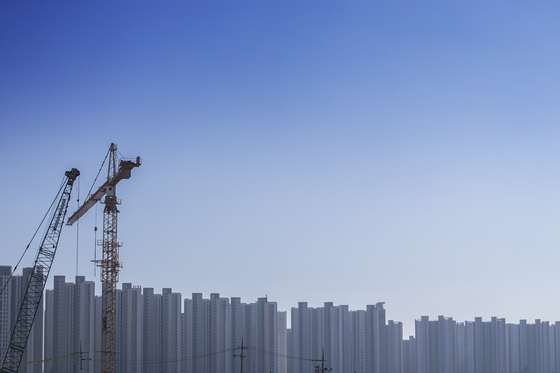 An apartment construction site in Paju on Dec. 17. [YONHAP]

They include 49,000 jeonse, or lump-sum deposit, residential units the government promised in November.

“The foundation of a stabilized housing market is a sufficient amount of supply,” Hong said Tuesday at a government meeting on real estate. “If it goes to plan, the housing supply will exceed the [annual] average amount supplied of 457,000 units in the last 10 years, which we expect would help stabilize the market.”

Long term expansion of residential real estate supplies includes finding land to build. Hong promised cooperation with the Defense Ministry and the state-owned Land and Housing Corporation on the development of the former U.S. military base Camp Kim in Yongsan District, central Seoul, as well as the Taeneung golf range.

The government in August announced plans to eventually build 33,000 residential units on government-owned properties including the former U.S. military base, the golf range and several others.

It will come up with incentives, which could involve taxes, for the construction of apartment buildings for rents in the first half of next year, Hong said.

Hong warned that the government will crack down on anyone who tries skirting the laws.

“This year, 1,804 people have been charged [with illegal real estate activities] and 120.3 billion won [$108.4 million] has been collected in dodged taxes including penalties by related institutions including the Land Ministry, the National Tax Service and the police,” Hong said. “Next year we will strengthen our monitoring including expanding the team that tracks down illegal acts in the real estate market.”

Hong said the government will continue its tight grip on loans to cool off the real estate market.

“This year the government has created a mechanism to cut off speculative forces from all sides — from buying to owning and even selling — in hopes of centering the real estate market on people who buy to actually live in places,” Hong said.

He apologized for the ongoing turmoil in the real estate market.

“This year we have aggressively pushed supply measures and housing stabilization plans,” Hong said. “However, it is regretful that the market has not yet stabilized.”

Last week the government added 36 areas including nine in Busan, seven in Daegu as well as five in Gwangju to the lists of districts that will be under restrictive regulations including limits on loans that homebuyers can borrow to purchase apartments.

In the case of Gwangju, all districts are now regulated by the government.