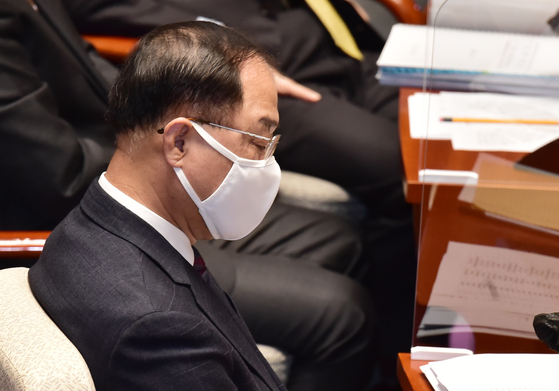 Finance Minister Hong Nam-ki at the National Assembly on Nov. 4 where lawmakers questioned on next year's budget. Hong said he will continue his job as Finance Minister but stressed that his resignation tender was sincere. [YONHAP]


Finance Minister Hong Nam-ki said he will continue to work as the nation’s chief economic policymaker while stressing that his offer to resign was sincere.

During a hearing at the National Assembly on next year’s budget Wednesday, Finance Minister Hong said he will do his best in carrying out his duties.

“I will do my best to perform my job according to the will of the person who authorizes me,” Hong said, referring to President Moon Jae-in. But “my expression to resign was sincere, and it is regrettable that it is being seen as a ‘political show.'"

He then asked the public to end discussions on the resignation.

Hong on Tuesday during a National Assembly hearing unexpectedly announced that he has told President Moon he was willing to resign, taking responsibility for the controversy surrounding changes in the capital gains tax.

“I believe someone has to take responsibility for the debate that has lasted for two months,” Hong said. “And I am telling you that I have decided to take the responsibility, and in expressing my intention to resign I've also turned in my resignation.”

The Blue House confirmed Hong’s tendering of his resignation to President Moon after the cabinet meeting on Tuesday, but said the president immediately rejected the resignation and reaffirmed his confidence in the finance minister.

Despite the President rejecting the resignation earlier in the day, Hong still expressed his will to resign publicly that same afternoon.

The Blue House in a statement released Tuesday afternoon said the reason Hong did not disclose his meeting with President Moon earlier in the day was because the finance minister respected the President’s right to name his cabinet members and that personnel matters are a matter of security.

The Blue House also said Hong did not know that the Blue House press office had announced that his resignation was rejected when Hong made the comment at the National Assembly.

The Blue House said the matter is finalized.

The finance minister has been frustrated with the Democratic Party's (DP) pushing on key issues including the taxation of investors.

Hong has publicly expressed his opposition to suspending plans to tax investors who have 300 million won ($263,000) or more invested in a single stock.

During the hearing on Tuesday, Hong announced that the government has agreed to suspend the changes.

“The government, the ruling party and the Blue House in a meeting decided to keep the level at 1 billion won, as uncertainties regarding the recent global situation and the economy have gone up,” Hong said. But “I have expressed my opposition and don’t think that level is appropriate.”

The government on Tuesday agreed to keep the current system of imposing a capital gains tax on profits on stock investments only to those who have more than 1 billion won invested in a single stock.

The government was planning to lower that bar to 300 million won and apply it immediately next year. It is part of the government’s grand plan to change the taxation of stock investments.

Korea currently does not tax capital gains on stock investments — other than those with more than 1 billion in a stock — and only taxes transactions.

While the government plans to lower the tax on transactions down to 0.15 percent from the current 0.25 percent by 2023, it has decided to charge a capital gains tax on sales in which the gains are more than 20 million won starting 2022.
The government faced a strong backlash from investors on the change of the threshold to 300 million won.

Fear about stock prices, which have been strong recently, has led to demands to cancel the change.

The DP is worried about losing public support over its recent decision to field candidates in next year’s mayoral race in Seoul and Busan.

The party has faced criticism about breaking an internal rule that said it would not nominate a candidate in a by-election if a party member elected to the public office loses the post due to grave misconduct.

This is not the first time that Hong has had to give in to party pressure.

Earlier this year, Hong strongly fought against party demands to grant every Korean household an emergency relief grant as he was concerned about rising debt levels.

He especially noted that if the grant is to be disbursed, the government would have to fund it through issuing bonds. He was attacked by lawmakers, some demanding that he resign.

The National Assembly in late April approved a 12.2 trillion won second supplementary budget of the year. Of the total, 11.2 trillion won was used for emergency relief grants.

He also opposed to the party’s telecommunication subsidy. Yet the DP pushed strongly and ended up passing a 900-billion-won subsidy in the fourth supplementary budget, which was approved in September.

Stock market's biggest winner could be the government