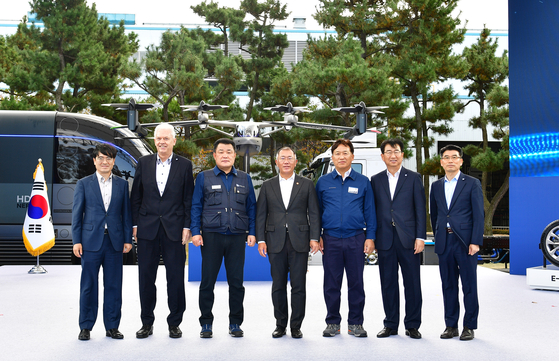 
Hyundai Motor Group Chairman Euisun Chung and top management met with leaders of the company’s union to promise cooperation in a time of rapid change in the auto industry.


The meet-up between the two parties is an unusual one for Korea’s largest automaker, whose labor union is notoriously famous for its hard-line activities. This is the first time since 2001 that Hyundai Motor Group’s chairman met with union leaders.

Results of the meeting were positive, both sides said in separate statements. The labor union had asked for a face-to-face session last month in a comment released right after Chung’s appointment to the chairman position.


“Stabilizing labor-management relations is a big goal during my term as chairman,” Chung was quoted as saying by the labor union. “We need to find ways that could align the labor union members’ satisfaction with the company’s growth.”


Chung stressed cooperation between management and the labor union is of the utmost importance as the auto industry is going through a transformational phase with the rise of electric vehicles (EVs).


“Management and labor should work together in order to ensure the company is ahead of change. I will do my best as chairman. Cooperation from the field is very much in need.”

The production increase of electric or hydrogen-powered vehicles raises concerns for the labor union as these eco-friendly cars require fewer parts than vehicles powered by internal combustible engines. Shifting production lines could lead to massive downsizing of current production staff.


“Ulsan was the epicenter of Hyundai Motor’s growth — for the sake of its local economy, investments in new businesses should be focused there,” said Lee.


“Business restructuring is unnecessary at this point. Production of alternative [parts] for EVs should be handled within the Ulsan plant.”


“Investments in research and development and production equipment should be greatly increased,” Lee suggested as a way to overcome quality issues.

Hyundai Motor is currently grappling with reports of more than a dozen Kona Electric's catching fire, while the automaker reported a quarterly loss in the July-September period due to provisions for costs related to the Theta 2 gasoline engine.

“There should be no division between management and labor when it comes to quality. Let’s work on this together,” Lee added.


The meeting is a symbolic event as the company has had a long history of intense management-labor conflicts, cited by analysts as a major risk factor.


Signs of recovery surfaced this year when the labor union and management agreed to freeze annual wages for the first time in 11 years. It was the third time this had happened in the company’s history, the other times being the Asian financial crisis in 1998 and global financial crisis in 2008. This also marks the second year that the two held wage negotiations without a walkout — a frequent occurrence in prior occasions.


“There seems to be a common understanding that the current situation the auto industry is facing, with the Covid-19 and the global economic recession, calls for efforts from both sides,” Hyundai said in a Tuesday statement.