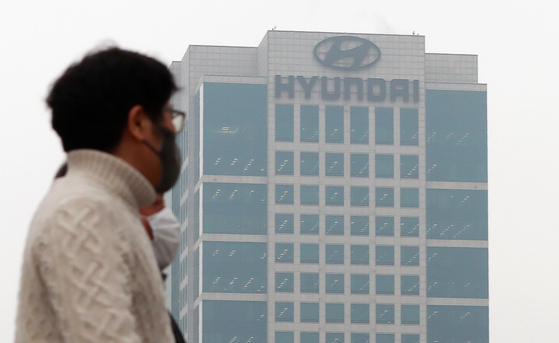 Hyundai Motor lowered its sales target for the year as it continued to suffer from a continuing shortage of auto chips.

"We expected the impact of auto chip shortage would get better in the latter half of this year," said Seo Gang-hyun, executive vice president during a conference call Tuesday, "but due to continued Covid-19 infections in the Southeast Asian region, which resulted in suspension of many chip factory operations there, the impact lasted longer.

"Although the Covid-19 situation got better from September, we expect it would take some more time for the factories to normalize," he continued. "We think the impact from the chip shortage is likely to continue until next year."

Robust sales of SUVs and Genesis models helped improve profitability but the base effect from last year's 2-trillion-won provision cost related to defects in the Theta 2 engine also factored in.

Operating profit also swung into the black to 1.6 trillion won from a loss of 313.8 billion won last year.

Revenue was down by 4.7 percent this year, coming to 28.9 trillion won.

The company sold 898,906 units of cars during the period, which was 12.8 percent less than what was sold last year during the third quarter.

“Global sales of cars dropped compared to last year due to the production disruption resulting from the shortage of auto semiconductors,” said Yun Tae-sik, head of the investor relations team at Hyundai Motor Tuesday.

“Operating profit was able to inch up due to improvement in the product mix and a drop in incentives [to dealers when they sell more units]. The base effect from last year's provision related to the Theta 2 engine also factored in."

In Korea, Hyundai Motor sold 15,4747 units, 22.3 percent fewer than the same period last year due to a cut in tax incentives on car purchases as well as the supply shortage due to the chip shortage.

Of the cars sold, SUVs accounted for 47.1 percent, raising their share by 1.6 percentage points from a year earlier. Shares of

When asked about its plan for electric vehicles (EVs), Koo Za-young, senior vice president of Hyundai Motor in charge of investor relations, said the company is revising its long-term sales objective.

"We initially said we aim to sell 560,000 units of EVs by 2025 but we believe that the figure was very conservative considering explosive sales growth in EVs globally at the moment," Koo said. "We are currently in the process of revising the objective and will share the figure when ready."