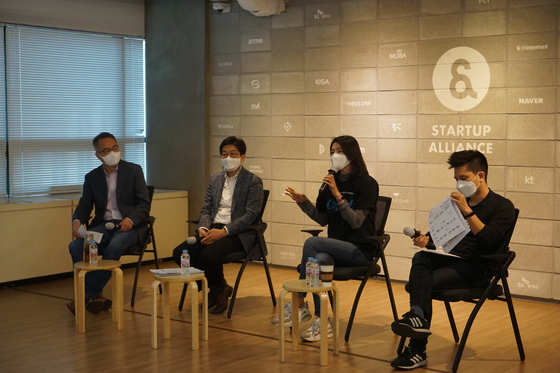 
Korean start-ups are going through a difficult year as funding disappears and hiring becomes more difficult due to the coronavirus pandemic.

According to a survey from Opensurvey, 166 start-up founders in Korea gave an average of 71 points out of 100 when asked to score this year’s start-up ecosystem.

This was the first time the overall assessment had dropped on year since Startup Alliance, a non-profit support center for start-ups, started compiling such data seven years ago. The score had constantly increased from 68 in 2018 and 73 in 2019.

The biggest drawbacks cited were the sluggish investor sentiment of venture capitals and the lack of a high-quality workforce as more people prefer to stay at their current jobs during the uncertainty created by the pandemic.


“As economic growth slowed on a global scale, I think a lot of venture capital flowed out to more safe forms of investment,” said CEO Cho Min-hee of Rocket Punch, a business networking service, during a Tuesday press conference in Gangnam, southern Seoul.

“Looking at the flow of capital, venture capital funds froze up. I’ve seen start-ups that said funding opportunities fell apart in the middle of discussions, and consequently some had to cancel hires at the last minute.”


The pandemic and the tendency to reduce face-to-face interactions also stopped a lot of meetings, which are a crucial part of investors’ decisions.


“What’s important when presenting business to investors is that we show that energy,” said Cho. “Personally I felt expressing that wasn’t as easy online and the pitching didn’t come with the same responses. Grabbing an appointment itself was a challenge.”


Chung Shin-a, CEO of Kakao Ventures, said mid-sized start-ups in Series A and B investment that passed the seed-funding phase were the most affected group this year.


“Investors in seed phase start-ups are risk-takers from the first place, so the effect wasn’t as drastic on companies in this stage,” she said. “For later-stage start-ups, investment decisions depend on their past funding records so the real problem was for companies that are in neither groups, especially those that run offline businesses.”


Job seekers also picked up on this uncertainty.

Survey results showed on-year drops in the portion of respondents currently working in conglomerate companies that are considering establishing a start-up (42.2 percent), or working for one in the near future (17.6 percent). Their perception of start-ups in general as “unstable” had jumped to 22.6 percent this year from last year’s 6.2 percent.

Despite a difficult economic situation, their assessment was that the overall start-up ecosystem in Korea was improving in terms of social perception and the number of institutions that fund or support such businesses.

Chung added that 2021 would be a better year for start-ups, funding wise.

“The government decided on a massive New Deal project to inject money to young businesses,” she noted. “A lot of this funding will go to later-stage start-ups, but this also means if you survive up to a certain point from there, there’s an abundant amount of capital waiting to boost growth afterward.”