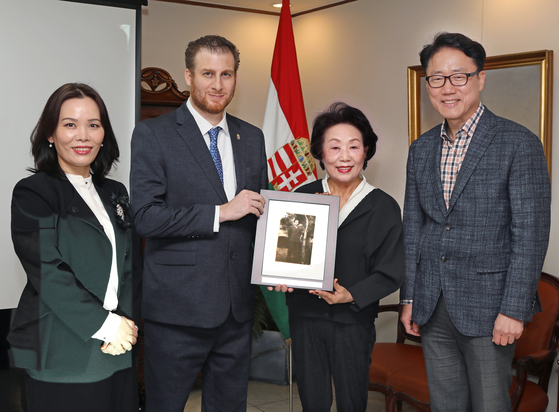 From left, Nam Sunmi, wife of Ambassador of Hungary to Korea Mozes Csoma; ambassador; Kim Se-won, daughter of composer Kim Soon-nam; and Ryu Kwon-ha, CEO of the Korea JoongAng Daily, at the Hungarian Embassy in Seoul on Tuesday. [PARK SANG-MOON]

A photo of famous Korean composer Kim Soon-nam, whose later life in North Korea is only partly known, was conveyed to his daughter at the Hungarian Embassy in Seoul on Tuesday.

“This is a photograph of Kim that I found at the National Archives of Hungary,” said Mozes Csoma, ambassador of Hungary to Korea, as he presented a copy of the photograph to Kim's daughter, Kim Se-won. “It was taken when Kim was at an event at a hospital run by Hungarians in North Korea on May 1, 1952.”

Composer Kim Soon-nam was born in 1917 and is believed to have died sometime between 1983 and 1986. He is known for songs including “Sanyuhwa” and “Inmin Hangjaengga [Song of the people’s resistance],” composed with lyrics from a poem by Yim Hwa, who also moved to North Korea later.

Having studied music in Japan beginning in 1938 during the Japanese occupation of Korea (1910-1945), Kim returned to Korea in 1942, in time to witness Korea’s liberation from Japan three years later.

His works were sung often throughout Korea in the late 1940s, and his “Inmin Hangjaengga” is said to have once been adopted as a national anthem of North Korea until the current one, “Let Morning Shine,” was officially adopted in 1947. That development did not place Kim in a favorable light in the South at the time, with the peninsula then in the midst of an intense left-right ideological divide.

“When it became known that North Korea had used my father’s song as its national anthem, there was an order in the South to arrest my father,” Kim Se-won told the Korea JoongAng Daily at the embassy on Tuesday.

Kim Soon-nam fled to the North in 1948, the same year that the South Korean government was formed. Kim’s daughter was just three years old at the time.

The younger Kim is now a veteran voice actor, radio broadcaster and host, having run many programs that have since become iconic, such as “Cinema Music Room” and “Platform at Night” on TBC, while also serving as a narrator for programs including reality TV program “Jjak” on SBS.

Kim has for years traced the footsteps of her father.

“When I took several trips around the world as part of MBC’s documentary about my father [in 1990] it was eye-opening to discover his traces in so many nations and see how vividly he remained in memories of his friends,” she said. “It is said that even Russian composer Dmitri Shostakovich knew of my father’s works and exclaimed that there is such a genius in the East. But what I am learning of my father from the Hungarian ambassador’s research is a whole new information for me.”

Ambassador Csoma also presented Kim with copies of records he had obtained from the National Archives of Hungary, which included a radio broadcast schedule in Budapest dated Sept. 17, 1953, showing that Kim’s music was aired in Budapest that day; and a music program of a concert dated in 1953 in Budapest that shows Kim’s piece was played at the concert.

Kim’s music, along with works by other Korean intellectuals and artists who moved North before the South Korean government was established, were banned here until 1988.

“When I found these records about Kim, I inquired into whether his relatives still lived in the South,” Csoma said. “When I found out that his daughter lives on, I wished to present these findings to her in person as soon as possible.”

Ambassador Csoma has long been interested in affairs concerning Korean history. Prior to his post in Korea, he was a professor of Korean studies at the National University of Budapest. In his previous interviews with the Korea JoongAng Daily, the top envoy from Hungary mentioned how he has been studying the stories of Korean intellectuals who went to North Korea during the late 1940s, after Korea was liberated from the Japanese occupation.

They include writer Lee Tae-jun, who went to North Korea in 1946 and visited Budapest before he was purged in North Korea in 1956; novelist Han Sorya, whose novel “Taedonggang” (1955) has been published in Hungarian; and poet Lim Hwa, whose works are also available in Hungarian, though Lim never had a chance to visit Hungary, according to Csoma.

“Although I have no living memory of him, it is through these records about my father that he lives on,” Kim said. “After all these years, he continues to come and see me this way.”

Kim had published a book about her journey in tracing her father’s footsteps, “My Father Kim Soon-nam” (translation) in 1995.