By one key measure, Korea is becoming more diverse

By one key measure, Korea is becoming more diverse 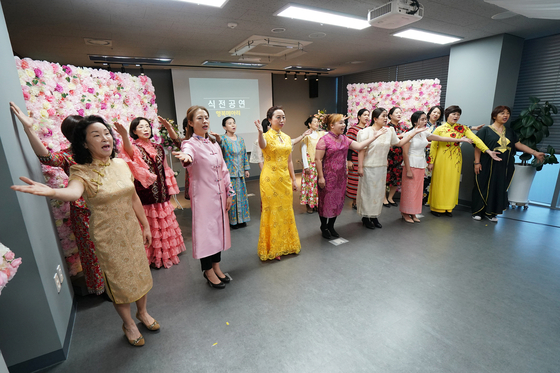 A group celebrates the opening of a center for multiethnic families in Dongdaemun on Jan. 7. [DONGDAEMUN DISTRICT OFFICE]


Korea is becoming more diverse, the numbers seem to indicate.

According to Statistics Korea on Thursday, last year the number of multiethnic couples marrying in 2019 was 24,721, 4 percent more than in 2018.

The total is 10.3 percent of all marriages in Korea last year.

As a result, the marriages between a Korean and a foreigner accounted for 10.3 percent of all marriages in Korea in 2019. That’s a 1.1 percentage-point increase compared to the previous year.

That is not a record. In 2008, 11.2 percent of all marriages were multiethnic. The figure dropped to 7.4 percent in 2015. It has been steadily rising since then.

Couples where the wife were Korean accounted for 17.2 percent. In the rest of the cases, a naturalized Korean married a foreigner.

Among all the multiethnic couples married last year, Vietnamese women married Korean men in 30.4 percent of the cases, followed by Chinese women, at 20.3 percent, and Thai women, at 8.3 percent.

Among the foreign men, Chinese were 8.2 percent of the total, Americans 6.1 percent and Vietnamese 2.6 percent.

The majority of the mixed couples lived in the greater Seoul area. Gyeonggi had the most followed by Seoul and Incheon.

The sharpest on-year increase of mixed couples was in Sejong, at 26.1 percent, followed by Gangwon, at 13.2 percent.

While the number of multiethnic married couples has increased, they are having fewer children.

Last year 9,868 couples split, which is a 3.8 percent drop from the previous year.

"The data on mixed couples from marriages, divorces as well as birth and death will be used in creating policies for such diverse families," said Kim Soo-young, head of the Statistics Korea's vital statistics division.