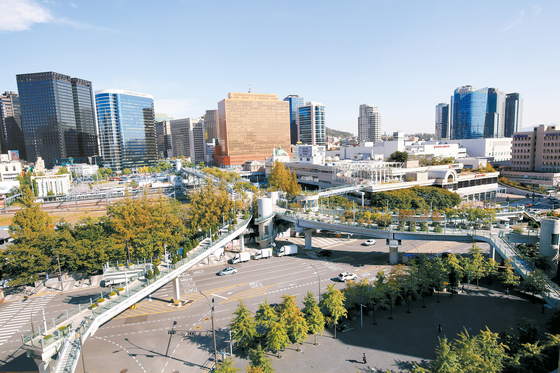 
Baek Hae-young remembers the sea of angry placards like it was yesterday. The area surrounding Seoul Station, in the heart of the Korean capital, was plastered with signs protesting then-Seoul Mayor Park Won-soon’s plans to convert a dilapidated vehicular overpass into a pedestrian walkway.

The 2015 plan was part of the Seoul Metropolitan Government’s green initiative to build a Seoul equivalent to New York City’s High Line — and essentially to encourage people to ditch their cars and walk more.

But not everybody welcomed the project with open arms.

“After that announcement, there was a huge backlash from residents around the area,” said Baek, head of the Urban Regeneration Center of the Seoul Metropolitan Government.

“They each had a personal story as to why scrapping the road would hurt them financially. Those who ran a sewing business in Seogye-dong, for instance, said it only took five minutes to deliver their clothes to Dongdaemun Market on the overpass, but that if the road was converted, they would have to make a detour and waste money on extra transportation costs.”

And then there were others whose objection seemed like “a knee-jerk response” to losing a road, and those who were simply against anything liberal Park put forth, Baek continued.

Talks about developing the rundown Seoul Station area as part of the capital’s Urban Regeneration Model — a broader project to "remodel" outdated infrastructure in the city to revitalize local communities — had been in the works before Park’s announcement. But with the ruckus surrounding the new walkway, city officials decided to review regeneration programs for the Seoul Station area “more comprehensively,” said Baek.

In the Korean context, remodeling a building is to change its physical structures while retaining its basic framework.

Over time, the key focus of the regeneration efforts in the Seoul Station area — mainly Jungnim-dong, Hoehyeon-dong and Seogye-dong — shifted from the station to the walkway, which officially opened to the public in May 2017 under the name Seoullo 7017.

The city concentrated on how Seoullo 7017, stretched about a kilometer (0.6 miles) over some of the city’s busiest roads, can help breathe new life into the narrow, dilapidated alleys of nearby residential zones, and into the small sewing factories of Seogye-dong.

For the past five years, Baek has overseen those regeneration efforts on the ground as chief of the Seoul Metropolitan Government’s Urban Regeneration Center — specifically tasked with overseeing the Seoul Station and Seoullo 7017 neighborhoods. A lot has been accomplished, she said, though more should be done in the years to come.

Nearly two months before the Seoul city government’s five-year funding of regeneration programs in the Seoullo 7017 area is set to expire, the Korea JoongAng Daily sat down with Baek and some of her colleague coordinators at the center in Jung District, central Seoul, to hear about their endeavors and what lies ahead.


How many regeneration programs did you do over the past five years in the Seoul Station area?

Was there a basic theme that the city had in mind for the programs?


Baek: The key was to build a “pedestrian network” around Seoullo 7017, allowing people to easily get around the area on their two feet and really encouraging them to walk around more often. So the vast majority of our 60 billion won budget went toward renovating streets and alleys near Seoul Station. To help sewing factories in Seogye-dong and Cheongpa-dong, some funds were allocated to opening pop-up stores and creating a new fashion brand, Agoing, for both of which the neighborhood’s professional sewers collaborated with college students and young fashion designer hopefuls to design, make and sell clothes.

The Seoul city government purchased and remodeled eight buildings in the area as well to help locals get together with their neighbors and build connections. What exactly did these “anchor facilities” do?


Baek: Every day, hundreds of thousands of people pass by Seoul Station, yet just behind this transportation hub, about 100 meters (328 feet) away, there are people living in low, shabby residential buildings. So we realized that no matter how many people come visit Seoullo 7017, those neighborhoods would still be left in poor condition — unless we do something about it. And that’s how we came up with the idea to build eight anchor facilities to help neighborhoods near Seoullo 7017 grow and change along with the overpass. We thought it was important to have a place where residents can come and discuss regeneration programs that are actually happening on their turf, and bond with each other through recreational activities and events. Some people asked me, “Why not just build one huge iconic building to attract more people?” But I thought it was useless to spend billions of won on constructing a new iconic structure when we already had Seoul Station. Plus I thought it was crucial to have a place where residents can really gather and develop a sense of affection toward their communities. Thanks to these anchor facilities, neighborhoods have really grown more vibrant.


Coordinator Choi Sung-wook: We chose really old, shabby buildings as our anchor facilities on purpose. Some experts advised us to build large new buildings next to main roads, but we did the opposite by selecting the oldest buildings in the darkest corners of hidden alleys. By remodeling those buildings, we wanted to show residents how dilapidated buildings can come to life again. After those anchor facilities opened, we noticed some people remodeled their own places.

Jungnim Changgo in Jungnim-dong, before and after renovation. The building is one of eight so-called ’anchor facilities“ near Seoul Station, where nearby residents gather to socialize and participate in cultural activities sponsored by the Seoul Metropolitan Government. [URBAN REGENERATION CENTER OF THE SEOUL METROPOLITAN GOVERNMENT]


On a scale of 1 to 100, how would you grade the regeneration programs?


Baek: Ninety-five. I think the Seoul Metropolitan Government, our coordinators at the center and the residents all cooperated really well.

What are the deducted five points for?


Baek: I think the area still lacks connectivity. The urban regeneration project was supposed to show how easy it is to get from one area to another in downtown Seoul on foot, but I think that’s still missing, and something we all definitely have to work on in the future.

What do you mean by a lack of connectivity?


Baek: I think Seoul generally lacks public signs informing people how to walk to different places. For example, it’s easy to get to Yeongdeungpo District [in western Seoul] by car, but not on foot. People have to rely on their mobile phones for navigation services. Luckily, the city government is currently planning to put up signs around Seoullo 7017 to visually guide pedestrians to nearby places.

What changes have you sensed over the past five years in the local economy now that it has Seoullo 7017?


Baek: People use Seoullo 7017 to eat, drink and enjoy the city, and I think that has naturally helped the local economy grow.


Coordinator Lee Ki-soo: We’re also seeing more people opening new businesses in the area. Where there used to be a warehouse is now a clothing store or an accessory shop, and office workers use Seoullo 7017 to walk to this part of the town and eat and drink after they get off work. Residents from both ends of the walkway also come and go.

Jungnim-ro, before and after renovations. The majority of Seoul’s 60 billion won ($53 million) budget for regeneration projects in the Seoul Station area went toward renovating streets and alleys. [ URBAN REGENERATION CENTER OF THE SEOUL METROPOLITAN GOVERNMENT]


Coordinator Choi: Tons of places reached out to us, including the Netherlands, Hong Kong, Singapore, Japan, Sweden and the United States. They were mostly government officials, but we also had some schools come visit.


Baek: They seemed mostly interested in what changes Seoullo 7017 has brought to nearby areas and the local economy, whether people were really walking more than before and how fond residents have grown of their communities through the regeneration programs. I think the programs have definitely enabled people to start thinking about their communities with more ownership.

When do these urban regeneration programs end?


Baek: By the end of December.


Baek: The past five years were about laying the groundwork for residents, business owners and manufacturers here to thrive after the Seoul Metropolitan Government halts its intervention.

And do you think they can thrive?


Baek: Overall, yes. Residents have created their own community groups and cooperatives, so I think they will continue helping each other out. The Seoul Community Regeneration Cooperative, composed of residents and experts, and which our center and the city government helped create, will hopefully lead the way with funding from the city.