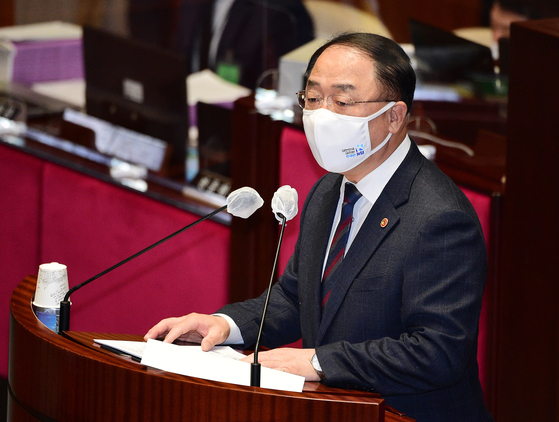 HAN AE-RAN
The author is the head of financial planning teamof the JoongAng Ilbo.


It is rare for a government minister to resign at will. When a high-level official leaves office, it is usually not voluntary, but forced. They remain in office until fired as it is irresponsible to submit a resignation just because things don’t go as they wished.

Some ministers get the spotlight by turning in resignations because they cannot work how they want to. In November 1965, Finance Minister Hong Seung-hee suddenly tendered his resignation and admitted himself to the hospital. While he claimed that it was for health reasons, the real reason was his discord with Deputy Prime Minister and Economic Planning Board head Jang Ki-young. While Hong was on an overseas trip in September, Jang implemented “realistic interest rate” measures.

Due to the need to raise financial resources, Jang raised bank interest rates to the private loan level, and the unprecedented “reverse interest rates” lower than savings interest rates were implemented. As the finance minister was skipped in the decision-making process, he was upset. His resignation was processed the next day.

In February 1990, during the Roh Tae-woo administration, Vice Prime Minister and Economic Planning Board head Cho Soon submitted his resignation due to discord with the Blue House and ruling party. The party prioritized growth in economic policies while Cho valued stability. Korea’s growth rate was declining after the three-low’s boom of the 1980s passed. According to a report, Cho tendered his resignation to Prime Minister Kang Young-hoon and said that if economic policy focused on stability did not continue, the Korean economy would fall into a South American-style low growth and high prices. About a month later, the entire cabinet resigned.

Vice Prime Minister for Economic Affairs and Finance Minister Lee Hun-jai in the Roh Moo-hyun administration many times expressed an intension to resign over discord with a liberal group of presidential aides in the Blue House. He recently embarrassed the ruling Democratic Party by saying, “Lately, I have doubts whether Korea can really achieve a market economy.” Shortly after the budget bill passed on Dec. 31, 2004, he submitted his resignation to the Blue House. But he actually stepped down three months later for another reason.

On Nov. 2, Vice Prime Minister for Economic Affairs and Finance Minister Hong Nam-ki told the National Assembly that he submitted his resignation to President Moon. Tendering and rejecting a resignation is possible, but it was an unusual way to make it public — explaining the government’s economic policies on YouTube. That is a unique resignation style matching Hong’s unique style.