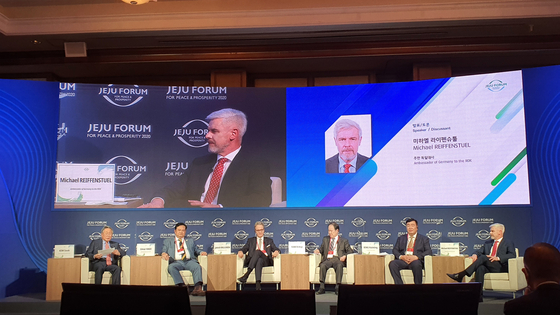 SEOGWIPO, Jeju — Japanese Ambassador to Korea Koji Tomita said that it is “vital” to improve Seoul-Tokyo relations, strained over ongoing history and trade disputes, “not just for the advancement in multilateralism in Northeast Asia but for ourselves.”

“Because of the political transition in Japan, I think it is vital for the two leaders, President Moon Jae-in and Prime Minister [Yoshide] Suga to establish very close personal contact, and a leaders’ meeting will be a very important instrument to achieve that goal,” said Tomita, speaking during an Ambassadors' Roundtable at the 15th Jeju Forum for Peace and Prosperity Friday.

Addressing the prospects of new Japanese Prime Minister Yoshihide Suga visiting Korea for a trilateral summit later this year, the diplomat said, “The challenge is to create an environment where the two leaders can meet and respond to the kind of expectations held by the people in both countries,” adding this needs efforts both on the part of Japan and Korea.

Ambassador of Indonesia Umar Hadi, Ambassador of Sweden Jakob Hallgren, Ambassador of China Xing Haiming and Ambassador of Germany Michael Reiffenstuel also joined the first roundtable at the three-day Jeju Forum. The roundtable was moderated by Kim Sook, the former Korean ambassador to the United Nations, and was titled “Changing Dynamics of Northeast Asia Multilateral Cooperation.”

“We do think that it is vital to improve our bilateral relations not just for the advancement in multilateralism in Northeast Asia but for ourselves,” said Tomita. “The past few years have seen a serious decline in terms of mutual trust between our two countries.”

Suga had served as a “key member” of the Shinzo Abe administration, Tomita noted, saying not to expect “any dramatic change from the basic stance taken by the previous administration.”

“But at the same time,” he continued, “I think when the administration changes, that gives us an opportunity to look at the situation afresh, and I think that would create an opening for better dialogue and a better environment for resolving various issues.”

Japan, he said, appreciates that the Korean government has taken “a very positive approach trying to engage the new administration” and has made a good start, but added that “the challenge is to make concrete progress on the basis of the good start" and that it is up to both countries to make efforts in that direction.”

The Japanese and Chinese diplomats had contrasting views on the role of the United States in the Northeast Asian region.

Xing noted that “multilateral cooperation should not be aimed at excluding, or isolating, some countries.”

With the recent U.S. presidential election, Xing said, “The political situation will also be swayed by who will be the next president. We all aspire to achieve stability and coprosperity in North East Asia. China is aiming at promoting interest and growth of our own nation. We really hope the United States can play a constructive role in the Northeast Asian region instead of having other interests.”

Xing also noted the turbulent road to resolve the Korean Peninsula situation amid the stalled denuclearization negotiations and said, “We cannot expect all the issues can be resolved overnight.”

Encouraging inter-Korean dialogue, he continued, “Political resolution is a viable solution. We are currently going toward the destination of having dialogue. The North and South Korean leaders need to sit down together, converse and go toward a way to improve the relationship.”

“Northeast Asia has the greatest potential and as the economic entity that will lead the whole world, we need to revitalize our values and preserve it and play the leading role to meet with the changing environment, and once again we need to go on the right course. which is multilateral cooperation,” he said. “We need to mobilize everything we can to keep peace and stability in our area, otherwise the Northeast Asian region will become a test bed for global security.”

The ambassadors on the panel were generally supportive of maintaining the momentum on dialogue related to North Korea.

“History has actually given Sweden a bit of a particular role on the Korean Peninsula,” said Swedish Ambassador Hallgren, referring to Sweden being the first Western country to establish diplomatic relations with Pyongyang and also its role as neutral observer to the armistice agreement which ended the 1950-53 Korean War in a ceasefire.
While supporting the UN and EU sanctions on the North, he said, “We still are of the view, which is also clearly mentioned in the UN resolutions, that we must talk to North Korea, that there is a duty for all of us to see negotiated peaceful solutions from the parties concerned because there is no military option.”

He stressed the importance of a “willingness to stick to long-term commitments on all sides because if the ball posts keep changing, the risk is too high, and fragile agreements will flounder.”

“Germany has a particular situation that brings us very, very close to our Korean friends,” said German Ambassador Reiffenstuel. “We were both divided nations. Germany was lucky enough 30 years ago, with the breakdown of the wall, and in the 1990s, with the reunification, that we could actually overcome this. This is something where we were very lucky in history, and we wish every success to Korea that they really will go this way and achieve it. This is why we very warmheartedly welcome all the efforts by this government really to get the dialogue process forward.”

He said that while Germany supports the current sanctions regime on the North as it is related to the issue of the denuclearization of the country, “on the other hand, it is also important that one does have a long breadth and step-by-step efforts toward a solution.”

Reiffenstuel said, “Our security is best guaranteed in multilateral forums,” stressing the need for strong multilateral institutions and a rule-based system according to international law, where everybody plays along, saying, “only then we do have some kind of reliability amongst the nations and only when you have this reliability is it possible to work on trust and overcome this.”

Indonesian Ambassador Hadi referred to the Asian paradox in the region, noting that economic progress had been made at such tremendous speed but there remains a “trust deficit" in Northeast Asia.

“From the eyes of Southeast Asian countries, especially Indonesia, Northeast Asia is a very important region,” said Hadi, noting that South Korea, Japan and China are “models for economic development in our countries” and also Asean nations’ main economic partners.

He noted how other parts of the world, including Southeast Asia underwent a “painstaking process” to successfully transform the trust deficit to “strategic trust.”

“So in short, we want to be you, but at the same time we also see what is called the Asian paradox in the region,” he said. “That’s why we think what can be done is first for the countries in this region to decouple sensitive security issues from non-security platforms and promote more functional cooperation on sectors meeting the common priority of peoples in the region such as public health, food security, green developing digital economy.”

The Jeju Forum 2020 took place from Friday to Saturday under the theme of “Reinventing Multilateral Cooperation: Pandemic and Humane Security."

Second Korean Vice Minister of Foreign Affairs Lee Tae-ho gave the keynote speech, in the second Ambassadors' Roundtable later Friday afternoon on “Sharing the Lessons and Experiences from Covid-19,” including Korea’s battle to contain the virus over the past eight months.

“The only way forward is an inclusive approach based on openness, transparency and civic activism,” said Lee. “I believe that the fastest and steadfast adherence to these principles has empowered Korea to gain some successes in the fight against Covid-19. The Republic of Korea [ROK] as a responsible middle-power will make utmost efforts to usher in an inclusive global community and help rekindle multilateralism and a rules-based international order, with stronger and reinvigorated multilateral institutions with the United Nation at its core. In the same spirit, Korea will play an active role in reinforcing inclusive cooperation in Northeast Asia.” 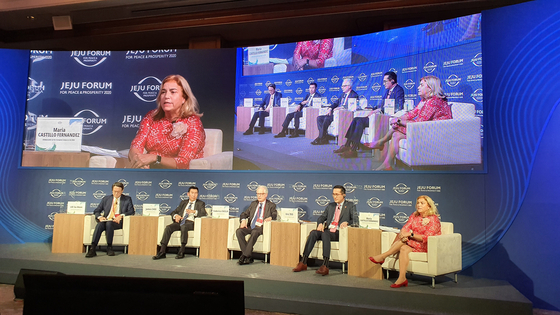 
Ambassador Choi shared Australia’s effective response managing to flatten the curve and keeping new cases at around 20 per day, however noted it came at the cost of closing borders to international travelers, a different route than the one taken by Korea. Australia likewise has a similar number of total cases to Korea, at around 28,000.

Choi said, “Korea’s kept its economy open while at the same time implementing strict quarantine measures; it’s certainly a model for the rest of the world, and rightly so. Korea’s response has received much international praise."

Italian Ambassador Failla addressed the lesson that can be drawn from a global challenge such as Covid-19 and said that there should be three approaches: systemic, cultural and innovative.

Likewise, he noted, “We know that the economic sector’s been very affected by the pandemic. You should have the right balance between controlling the pandemic and letting the economy survive. Because especially for small and medium enterprises, these times are very challenging and very difficult...You can imagine how the tourism sector has been affected.”

He also stressed the need for all countries to be able to have access to medical products and vaccines based on public health needs, stressing, “We should prepare now.”

Ambassador Teo shared that Singapore is seeing fewer than 10 cases per day and that 90 percent of the country’s patients had been linked to the foreign migrant population.

Teo said, “Throughout the whole process of managing Covid-19, strong leadership provided by the government working with the people and working for the people was of utmost importance.”

This included decisions on handling the pandemic within its own borders and managing the economy, economic fallout and getting the economy back on track, as well as “finding the right balance between protecting public health and a way to open the economy.”

EU Ambassador Fernandez addressed the challenges of securing health security and health as a global public good, as well as making a vaccine “accessible to all.”

She stressed the need for a digital and green response, and said, “There, we go hand-by-hand with Korea, with the European Green Deal and the Korean Green New Deal focusing on the same issues. We really welcome [Korea’s] announcement to be carbon-neutral by 2050; we need more partners to be able to together push our next big challenge, which is climate change.”