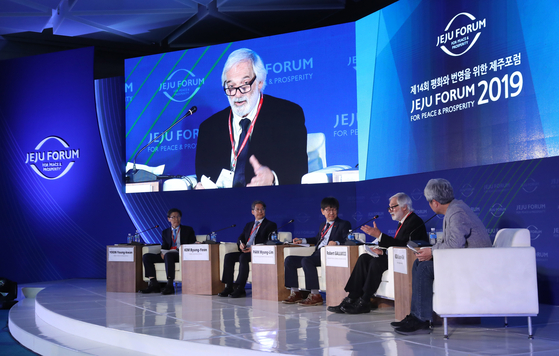 Panelists speak at a session of the Jeju Forum for Peace and Prosperity held in May 2019. The three-day 15th Jeju Forum will take place from Thursday to Saturday at the Lotte Hotel Jeju in Seogwipo in a hybrid in-person and virtual format after being rescheduled from late May because of the coronavirus pandemic. [WOO SANG-JO]


World leaders will put their heads together to discuss how to reinvent multilateral cooperation in the wake of the global Covid-19 pandemic as the 15th Jeju Forum for Peace and Prosperity kicks off Thursday, which will be held in a hybrid in-person and virtual format this year.

The Jeju Forum 2020 will convene from Nov. 5 to 7 at the Lotte Hotel Jeju in Seogwipo, on the scenic Unesco heritage site island, under the theme of “Reinventing Multilateral Cooperation: Pandemic and Humane Security.”

The opening ceremony of the forum will be held Friday morning, with congratulatory remarks to be extended virtually by former United Nations Secretary-General Ban Ki-moon, UN Secretary-General António Guterres and former U.S. President Bill Clinton. Korean President Moon Jae-in will deliver a keynote speech by video during the ceremony, while opening remarks will be made by Jeju Gov. Won Hee-ryong. Moon previously extended congratulatory remarks for the 12th Jeju Forum in 2017.

The 15th Jeju Forum initially had been scheduled for May 28 to 30 but was rescheduled to November because of the pandemic.

Annually, thousands of people from over 70 countries have gathered for the forum, which dates to 2001 and is organized by the Jeju Peace Institute and hosted by the Jeju Special Self-Governing Province, International Peace Foundation and East Asia Foundation. It is supported by the Korean Ministry of Foreign Affairs and Jeju Free International City Development Center.

Taking into consideration the Covid-19 situation, the forum this year will be held in a hybrid manner, with both on-the-spot and virtual sessions. Sessions will be live-streamed online through the Jeju Forum YouTube channel.

Global leaders, diplomats, scholars, heads of international organizations, business professionals, students and media will take part in the forum to address the challenges of the pandemic and climate change and discuss new perspectives on nature.

The first plenary session will address the main theme of the forum, as former President Clinton, former UN Secretary-General Ban, Jeju Gov. Won and former Prime Minister of Singapore Goh Chok Tong discuss, “How to Reinvent Multilateral Cooperation in the Midst of Pandemic.” The panelists, moderated by Sohn Jie-ae, an invited professor at the Graduate School of International Studies at Ewha Womans University, will discuss the global challenges as multilateralism faces protectionism and unilateralism and ways for the international community to cooperate to establish peace and prosperity.

The second plenary session is entitled, “Crises and Choices in the Age of Pandemic and Accelerations.” In a session moderated by Kim Sang-hyup, president of the Jeju Research Institute, Pulitzer-winning journalist Thomas Friedman, a foreign affairs columnist with The New York Times, will discuss with Gov. Won how to achieve global cooperation and solidarity in fields including technology, society and culture.

Ambassador of Indonesia Umar Hadi, Ambassador of Sweden Jakob Hallgren, Ambassador of Japan Koji Tomita, Ambassador of China Xing Haiming and Ambassador of Germany Michael Reiffenstuel will join the first roundtable on “Changing Dynamics of Northeast Asia Multilateral Cooperation,” which will be moderated by former Korean Ambassador to the United Nations Kim Sook.

Second Korean Vice Minister of Foreign Affairs Lee Tae-ho will give a keynote speech for the second Ambassadors Roundtable on “Sharing the Lessons and Experiences from Covid-19.” That session brings together Ambassador of Australia James Choi, Ambassador of Italy Federico Failla, Ambassador of Singapore Eric Teo and Ambassador of France Philippe Lefort, with former Korean Ambassador to Japan Lee Su-Hoon serving as moderator.

The Jeju Forum Youth Day Opening Ceremony kicks off Thursday, as Korean and international university students tackle issues in three sessions on climate change, education in the post-Covid-19 era, as well as settlement in Jeju, with plans to hold the JDC Youth Peace Talk Show.

Jacques Attali, founder of the European Bank for Reconstruction and Development, will join Choe Jae-chun, a distinguished professor at Ewha Womans University, to discuss, “Life in the Pandemic Era: Altruism, Multilateral Cooperation, and Humane Security” with the topic of Saturday’s closing session to be moderated by Kim Bong-hyun, president of the Jeju Peace Institute.

The Jeju Forum was launched in 2001 to commemorate the one-year anniversary of the historic first inter-Korean summit in June 2000 between South Korean President Kim Dae-jung and North Korean leader Kim Jong-il. It is a regional multilateral dialogue platform on the issues of sustainable peace and common prosperity in East Asia.

The forum was held every two years until 2011 and has been held annually since 2012.

Jeju's hotels would prefer you to stay on the property