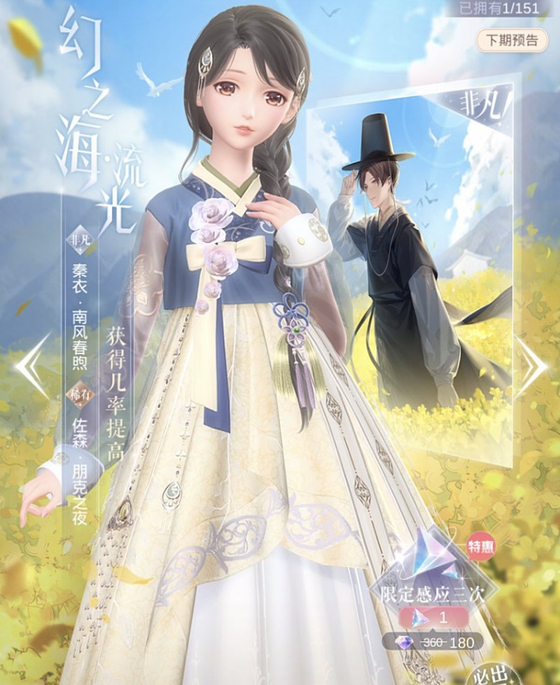 
Chinese game developer Paper Games shut down its Korean server on Nov. 6 after getting stuck in the middle of a war of words between Chinese netizens and its Korean customers.

Paper Games two weeks ago released a Korean version of its dress-up mobile game Shining Nikki, but pulled the game one week later following disputes over the identity of a clothing item featured in the game.

To celebrate the launch of Shining Nikki in Korea on Oct. 29, Paper Games released a series of in-game wardrobe items inspired by hanbok, or traditional Korean dress. Online commentators from China, however, complained about the dress being included as a special Korean item, claiming that it has its roots in China and is not traditionally Korean.

“Hanbok is the traditional style of clothes of Korean immigrants to China, an ethnic minority group in Mainland China, therefore should be considered Chinese,” said one Chinese commentator.

Tensions started to escalate after Paper Games wrote an official statement on Nov. 4, supporting the argument that hanbok is not Korean.

"We are paying keen attention to the recent controversy over traditional costumes and culture. As a Chinese company, we want to reiterate that our stance is always consistent with our country China," read the statement.

The company also added a link to a blog post written by a young pro-government activist in China, claiming hanbok was influenced by Chinese traditional clothing hanfu.

Paper Games announced that it would block the accounts of anyone spreading malicious information about China or trying to insult the country, implying that arguing that hanbok is Korean would count as an offense. A day late, the gaming company deleted the hanbok from the game. 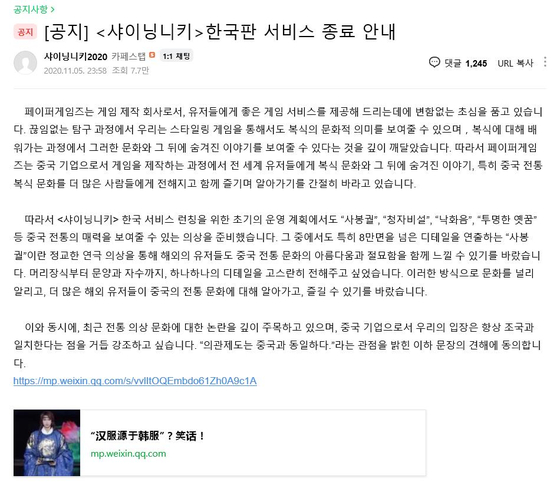 An official notice from Paper Games announcing it is shutting down its Korea operations. [SCREEN CAPTURE]


Korean gamers responded in kind. Deleting the game and applying for refunds for in-app purchases.

Just a few days later on Nov. 6, Paper Games completely pulled out of the Korean market, just one week after first launching the game here. More than 5,800 people have since signed a petition on the Blue House website calling for Paper Games to be investigated for stealing Korea's culture heritage and abruptly closing the service without offering compensation.

The issue has even reached the National Assembly. Democratic Party lawmaker Lee Sang-heon issued a statement immediately after the game developer decided to pull out from Korea, criticizing Paper Games’ actions.

“The company stood by the false claims of Chinese netizens, showed unscrupulous behavior by pouring criticism against Korean users and ending its services in Korea,” said Lee.

Lee also warned that the game company has violated Korea's fair trade rules, as it did not offer refunds and compensation before it pulled out from Korea. He urged the need to introduce an “authorized agent appointment system,” for foreign companies doing business in Korea.

The Paper Games case is just one of many recent incidents where Chinese netizens have quickly turned on Korea.

K-pop girl group Blackpink was recently caught up in controversy after they were shown touching a baby panda on a TV show without wearing gloves and face masks. Chinese netizens lashed out, claiming the group's actions were careless and harmful to the pandas, according to reports by China’s Global Times. 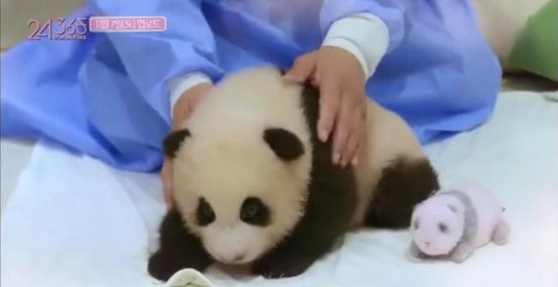 One member of Blackpink touches a baby panda with her bare hands. [WEIBO]


Following the incident, a hashtag criticizing Blackpink has been shared more than 550 million times on Chinese social media Weibo as of last week.

“Everyone — the producers, panda handlers and Blackpink — should be held accountable for what happened on air,” said one Chinese netizen. “Pubao is still a baby and very weak. Blackpink may not have been aware of their wrongdoings, but at least someone should have told them.”

The online tensions between the two countries are nothing new. Just a couple of months ago, K-Pop boyband BTS drew the ire of Chinese netizens for comments related to the Korean War made by the group’s leader, RM, as the group received the Van Fleet Award.

Experts say China’s emphasis on patriotism in their school’s education system may be one reason why online commentators are so quick to turn on perceived injustices by Korean celebrities.

“China has been strengthening ideological education, nationalistic patriotism and loyalty for President Xi Jinping and the ruling Communist Party of China,” said Kim Han-kwon, a professor of the Center for Chinese Studies at the Korea National Diplomatic Academy.

“China is not a favorable country for Koreans and its national image is worsening every year since the Thaad missile deployment dispute between the two countries. Such a deepening emotional gap may be one of the many reasons escalating online disputes,” Kim added.