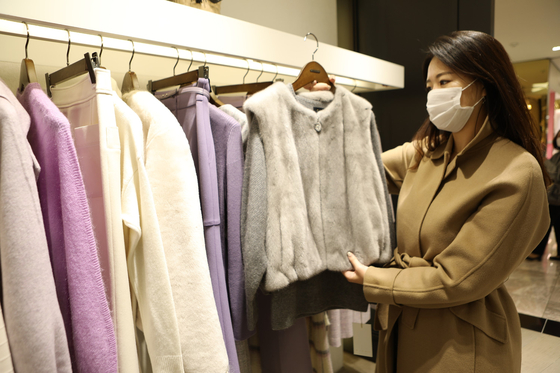 A model shops for winter outerwear at a Lotte Department Store. [LOTTE SHOPPING]


While the Korean Sale Festa has yet to end, retailers say they will kick off year-end sales this month, hoping to keep the retail excitement going.


Shinsegae Department Store announced Tuesday that it will offer up to 50 percent discounts on products from overseas brands including Michael Kors, Coach and Longchamp starting Nov. 13. Some of the brands will be on sale throughout January.

Food and lifestyle products will go on sale from Thursday through Nov. 29. Items from Shinsegae’s own furniture brand Casamia will be offered at discounts up to 30 percent.

Customers who charge at least 300,000 won ($270) on Samsung cards will get 5 percent back in gift certificates.

Lotte Department Store is holding a fashion promotion from Nov. 13 through Nov. 29. Some brands from fashion companies like The Handsome will start the promotion a day before.

Winter coats from overseas brands will be 50 percent off at the branch in Jamsil, southern Seoul, from Nov. 12 through Nov. 17. Parajumpers Dana parkas will be sold for 750,000 won, down from around 1 million won.

Padded winter coats from more affordable brands like National Geographic, The North Face and Blackyak will be offered for 30 to 70 percent off at the department store’s headquarters in central Seoul from Nov. 13 through Nov. 19. A short padded coat from National Geographic, for instance, will be sold for 169,000 won.

Hyundai Department Store is holding its year-end promotion at all 15 branches nationwide from Nov. 13 through Nov. 29. The goal is to sell all the leftover stock.

“Demand for presents is high in November and sales of winter apparel are also high,” said Hyundai Department Store in a statement Tuesday, adding it is its most profitable season of the year.

Kenzo, Peserico and Rick Owens are some of the brands offered in the promotion.

The Ministry of Trade, Industry and Energy announced Tuesday that card company transactions from Nov. 1 through Nov. 7 rose 8.4 percent on year to 17 trillion won thanks to Korea Sale Festa, the retail promotion designed to boost consumption and help businesses.

This year, 1,784 companies are taking part in the festival.

“Korea Sale Festa not only boosted consumer sentiment but also raised actual consumption and contributed to [raising] domestic demand,” said the ministry in a statement.