Fashion and food collide for this season's must-have collabs

Fashion and food collide for this season's must-have collabs 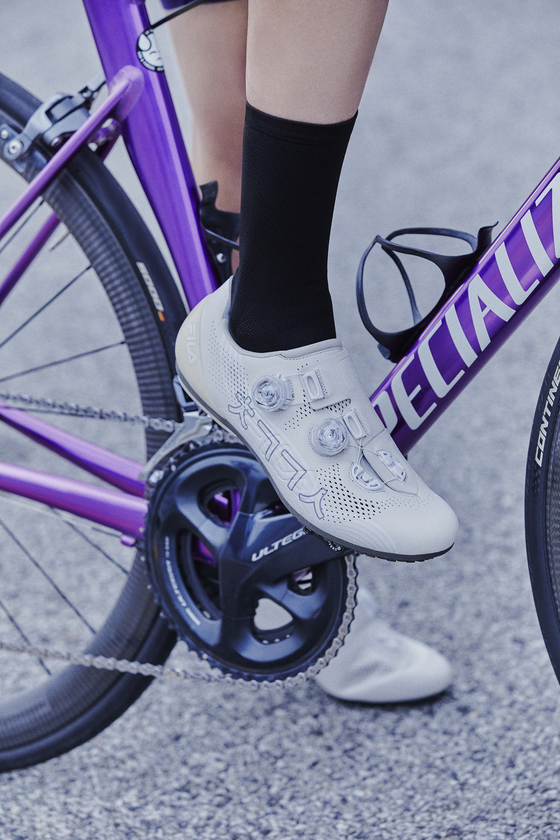 
Wearing your favorite sports team's uniform or a T-shirt with a logo of a band you love is a way to express individuality and personal interests.

To appeal to foodies, fashion and food brands have been collaborating and releasing limited-edition items that have "must-have" appeal. 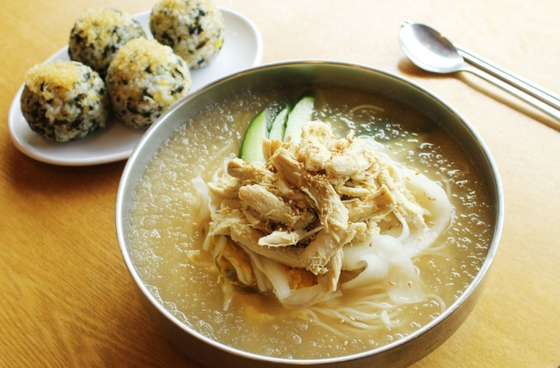 
A crowd gathered in front of a noodle restaurant last month, not to grab a bite to eat but to get their hands on a pair of cycling shoes.

And many were left disappointed after all 200 pairs were sold out within a couple of hours.

The footwear was a special edition of Fila’s cycling shoes Synapse series that were made in collaboration with restaurant Paldang Chogye Guksu, which means Cold Chicken Noodles, in Paldang in Namyangju, Gyeonggi.

Paldang Chogye Guksu, located nearby the Paldang Bridge, is a hot spot among cyclists who enjoy riding along the riverside. Because Paldrang Bridge marks the start of the Namhangang River bicycle route, the restaurant serves as a resting point for cyclists to take a break and eat cold chicken noodles before setting off on the Namhangang River bike path after riding along the Han River.

The restaurant also appeared on the MBC reality show “I Live Alone” last year in November, when singers Yoon Do-hyun and Henry stopped by while riding bicycles together.

"The road from Paldang Bridge near the restaurant to Yangsu Bridge is a popular course among cyclists," Kim Sung-tae, the CEO of the restaurant, said. "Especially on weekends in spring and autumn, more than 2,000 people visit the restaurant, and 30 percent of them are cyclists."

The limited edition of Fila's new cycling shoes features a wave pattern reminiscent of noodles along with the initials from the restaurant's name. It was a perfect marketing strategy that took the tastes of cyclists into account and successfully applied them to the product.

"We needed a symbolic place for cyclists because unlike general fashion sneakers, Synapse has a clear target consumer," a Fila official said. "Paldang Chogye Guksu restaurant serves as a mutual interest enjoyed by many cyclists." 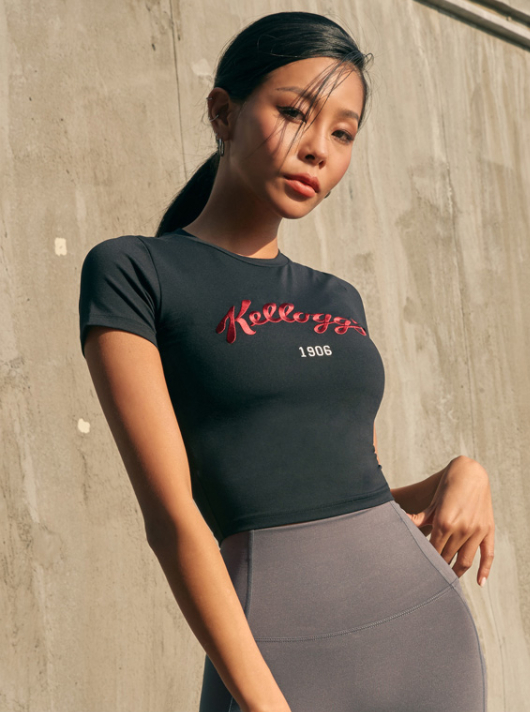 A Xexymix model wears a T-shirt from the activewear brand's collaboration with Kellogg’s Korea. [XEXYMIX]


With a heightened demand for products that are high in protein thanks to rising health concerns amid the coronavirus pandemic and people fretting about not getting enough physical activity, Xexymix, an activewear brand, has rolled out a series of activewear last month. In collaboration with Kellogg Korea, the clothes all feature the cereal brand's logo and, depending on the purchase amount, 45,000 customers who bought the activewear through Xexymix’s official website were also given Kellogg’s protein granola, protein granola shake, or protein bars as promotional gifts.


“While taking care of our health and staying fit has become more important than ever amid the Covid-19 pandemic, our brand came up with a unique collaboration to let the younger generations know about the importance of consuming protein that can enhance muscular strength and immunity,” Kim Hee-yeon, senior communication specialist of Kellogg Korea, said. 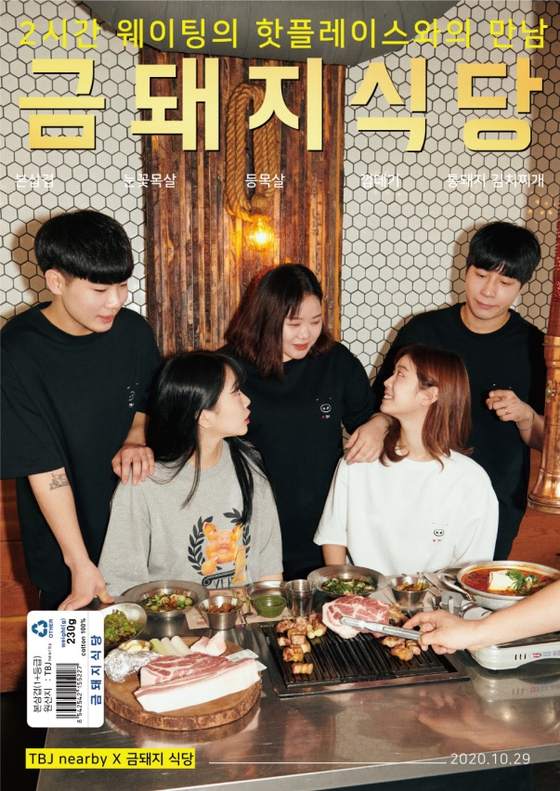 Fashion brand TBJ released T-shirts, a cap, an apron and a canvas bag with a pig nose design last month, which is the signature logo of the Golden Pig Restaurant, also known as Geumdwaeji Sikdang. A part of Seoul’s Michelin Guide 2019, the Golden Pig Restaurant near Yaksu Station in Jung District, central Seoul, is one of the most popular restaurants among foodies. It is also famous among K-pop fans for being a restaurant that BTS members have visited on multiple occasions. 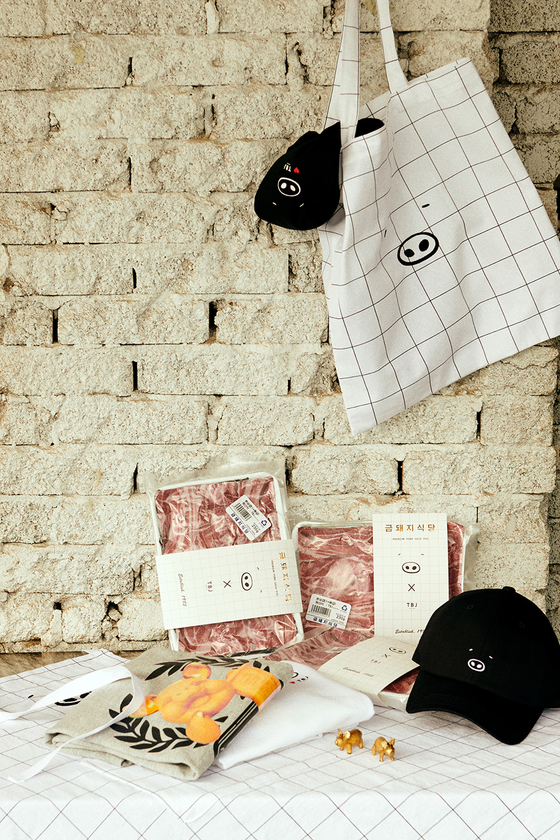 
Kim Ji-won, the CEO of style enterprise Hanse MK that develops TBJ, who is also a frequent visitor to the restaurant, suggested a collaboration after spotting the cute pig nose icon on the uniforms of the employees.

Besides the iconic pig-nose design, the vacuum-packaged T-shirt with a barcode sticker makes it appear just like a meat package. The apron’s plaid design is based on the white tiles of the outer wall of the restaurant.

"A well-known restaurant that attracts crowds and draws queues for entry has great brand value among millennials and Generation Z," Kang In-sik of TBJ’s marketing team said. "Collaborating with such restaurants can provide joy and special value to consumers by coming up with rare and unique items." 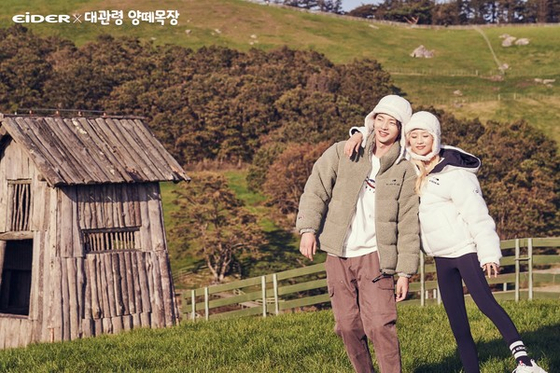 On Daegwallyeong Sheep Ranch, employees wear fluffy fleece jackets and matching trapper hats, as if they are dressed like a herd of sheep.

Fashion brand Eider came up with a uniquely designed trapper hat that resembles the shape of a sheep last month by collaborating with the sheep ranch, a popular travel destination in Pyeongchang, Gangwon, which is also known for its dairy products including their organic milk and milk manju, a round sweet that is filled with a paste made from milk.

“As the fluffiness and the creamy color of fleece jackets remind us of sheep, we decided to collaborate with a sheep ranch and make a hat with the same material that we use to make Eider’s Reve Reversible Fleece Down Jacket,” Eider said.

As a promotional gift, 2,000 hats were given to those who bought either an Eider Reve Hood or Reve Uni Reversible Fleece Down Jacket on a first-come-first-serve basis. The sheep ranch also gave out 80 free admission tickets to those who uploaded selfies wearing the hat on Instagram.

“Usually, visitors come to take a walk and enjoy the sheep pastures and landscape and try feeding the sheep, but the grazing season ended this month and will start back in April, so we were delighted to collaborate with Eider to come up with a special event." Jeon Hyo-won, the director of Daegwallyeong Sheep Ranch, said.

Boy band Golden Child to debut in Japan in January