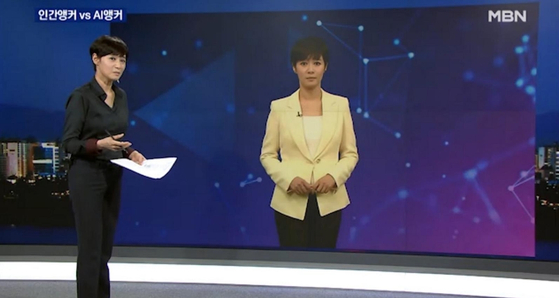 MBN's anchor Kim Ju-ha, left, has a conversation with her AI counterpart on Nov. 6 on the channel’s ’MBN News.“ Cable channel MBN began reporting its news with AI (artificial intelligence) announcer last weekend, becoming the first to do so in Korea. [MBN]

MBN revealed that an AI anchor based on announcer Kim Ju-ha started reporting news on Nov. 6, on the channel’s “MBN News.” AI Kim was almost identical to the real Kim, both in her looks and the sound of her voice, even mimicking small gestures similar to ones that Kim would make, such as fiddling with a pen in her hand during reporting.

“I was created through deep learning 10 hours of video of Kim Ju-ha, learning the details of her voice, the way she talks, facial expressions, the way her lips move and the way she moves her body,” said AI Kim. “I am able to report news exactly the way that anchor Kim Ju-ha would.”

In fact, AI Kim had already been tested online since last month, reporting the news four times a day. Reactions have been varied with some applauding the AI anchor’s extreme likeness to Kim while others said they were “freaked out” by the idea. During a broadcast on Nov. 6, AI Kim even shared a conversation with real-life Kim to compare their vocal tones. AI Kim was co-developed by MBN and AI production company Money Brain.

“Using AI anchors, we are able to quickly deal with natural disasters and other emergencies, and even report throughout the day,” said MBN, citing the benefits that will come in cutting labor and production costs. 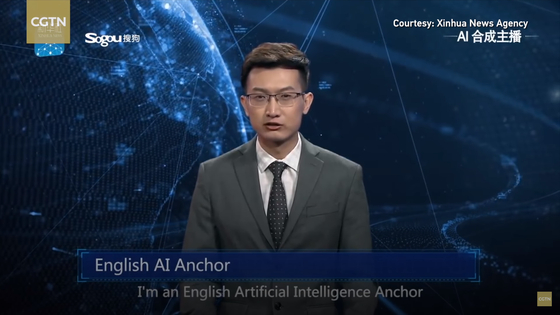 
AI Kim may be the first of her kind in Korea, but she’s not the first in the world. In February last year, China’s Xinhua News Agency released a video of the “world’s first female AI news anchor” named Xin Xiaomeng, who was modeled after an existing news anchor at the company. Xin made her debut report on China’s national legislature convening its annual session on March 3. Soon after, another English-speaking AI anchor was unveiled.

According to Yoo Seung-chul, a professor from the School of Communication & Media at Ewha Womans University, it’s not likely that AI avatars will completely replace real humans in entertainment, because of what is known as the “uncanny valley” and the human desire for the real thing. Uncanny valley is a term used to explain the phenomenon of humans preferring something that’s similar to their appearance — like stuffed dolls or animated characters — but becoming repulsed by it if it becomes too similar.

“It cannot cross a very fine line where it’s not too different from us, but not too similar either,” said Yoo. “And even if it becomes too natural for us to tell whether it’s real or not, the human mind will immediately reject it once it finds out that it’s not real. For example, if you find out that what you thought was an original painting by Leonardo da Vinci was actually just a well-made digital print, then you may want to throw it away. With technological advances, similar content will become more common, but it’s unlikely that it will become mainstream.”